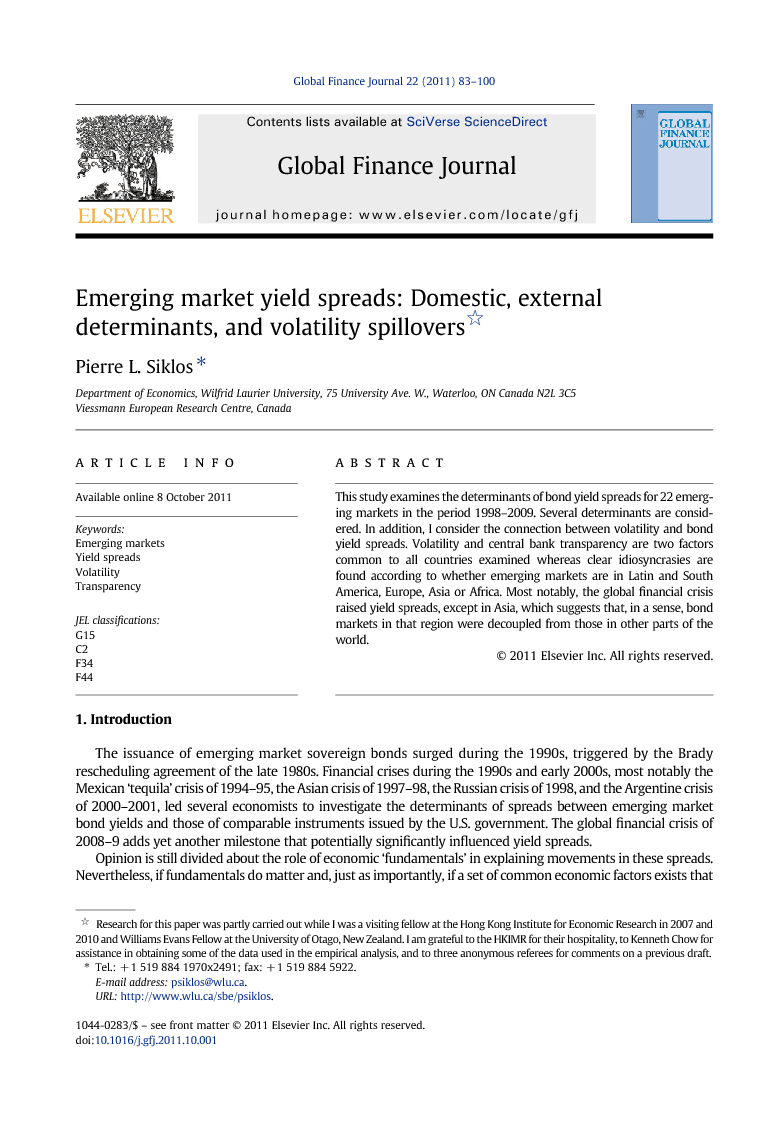 This study examines the determinants of bond yield spreads for 22 emerging markets in the period 1998–2009. Several determinants are considered. In addition, I consider the connection between volatility and bond yield spreads. Volatility and central bank transparency are two factors common to all countries examined whereas clear idiosyncrasies are found according to whether emerging markets are in Latin and South America, Europe, Asia or Africa. Most notably, the global financial crisis raised yield spreads, except in Asia, which suggests that, in a sense, bond markets in that region were decoupled from those in other parts of the world.

The issuance of emerging market sovereign bonds surged during the 1990s, triggered by the Brady rescheduling agreement of the late 1980s. Financial crises during the 1990s and early 2000s, most notably the Mexican ‘tequila’ crisis of 1994–95, the Asian crisis of 1997–98, the Russian crisis of 1998, and the Argentine crisis of 2000–2001, led several economists to investigate the determinants of spreads between emerging market bond yields and those of comparable instruments issued by the U.S. government. The global financial crisis of 2008–9 adds yet another milestone that potentially significantly influenced yield spreads. Opinion is still divided about the role of economic ‘fundamentals’ in explaining movements in these spreads. Nevertheless, if fundamentals do matter and, just as importantly, if a set of common economic factors exists that have significant explanatory power in the determination of these spreads, then there are clear policy implications that can be drawn. A related question is the role played by economic shocks that influence spreads more or less simultaneously. This raises the possibility of spillover or contagion type effects. As is well-known, there is no universally accepted definition of contagion, though several metrics have been proposed in the literature.1 Contagion effects are relevant since, for example, a post-mortem of the Asian crisis (e.g., BIS, 1999) suggests that the transmission of financial shocks across countries, in some instances, took place over a period of several months, in part owing to infrequent adjustment of credit ratings (also see Remolona, Scatigna, & Wu, 2006). The aim of this study is to contribute to the literature on the determinants of emerging market bond spreads. A large number of potential determinants, including volatility, are permitted to directly influence yield spreads. The volatility index derived from the S&P 500 group of stocks, also known as the VIX, is the proxy employed here (also see IMF, 2006). In view of the rise in volatility of equity prices during the 2008–9 financial crisis, the addition of more recent data may provide new insights into the role of asset price volatility on bond yield spreads. I also consider a time series indicator of central bank transparency. As far as I am aware this variable has not been used in studies of this kind. The relevant index captures many features present in alternative indicators of institutional performance and may well be a better way of capturing the relationship between the conduct of monetary policy and the behavior of term spreads. Dincer and Eichengreen (2007) provide a good survey of the role of central bank transparency in improving the delivery of monetary policy. In addition, the paper also employs yields derived from credit default swaps (CDS), for a subset of countries, to investigate the role of economic fundamentals in explaining emerging market bond yield spreads. Relatively few studies have considered this possibility (Remolona et al., 2006 and Ammer and Cai, 2007 are exceptions), and none, to my knowledge, in the panel framework. In another departure from most studies in the extant literature, I also rely on forecasts of inflation, economic growth, and the current account, as potential determinants of spreads behavior. It is surprising that such forward-looking variables have not been considered more often in specifications of the kind estimated here. After all, economic theory suggests that sovereign bond spreads ought to contain a forward-looking component and there is, of course, a large literature that considers whether the slope of the yield curve can reasonably predict future inflation, output growth, or even the likelihood of a recession (e.g., see Hamilton & Kim, 2002). Moreover, there is scope for asymmetry in the determination of emerging market bond yield spreads which is illustrated by permitting positive and negative inflation forecast errors, to separately influence yield spreads. Finally, explicit account is taken of the global financial crisis of 2008–9. Briefly, I find that the global financial crisis raised yield spreads in all regions except Asia and Africa, giving some credence to the decoupling view in the case of interest rate developments. It is also found that central bank transparency and changes in risk aversion are also significant determinants. U.S. monetary policy impacts only Latin, South American and Asian economies in the sample. Finally, forward-looking variables, such as inflation and current account balance forecasts, are also significant determinants of emerging market yield spreads. The rest of the paper proceeds as follows. Section 2 which provides a literature review, focuses on studies that rely on quarterly or monthly data.2Section 3 describes the data and provides some stylized facts, as well as outlining the econometric methodology employed in the paper. Section 4 summarizes the empirical results while Section 5 concludes.

This paper has considered some of the determinants of emerging market bond yield spreads for a sample of 22 countries that covers a period when these spreads were first on the decline followed by a sharp, albeit temporary, rise in reaction to the global financial crisis of 2008–9. A variety of determinants were considered, some domestic or external still others more institutional in nature. Moreover, unlike what has typically been practiced in the extant literature, this study is also interested in the role played by forward-looking variables, such as inflation and other macroeconomic forecasts. Among the institutional factors central bank transparency plays a significant role in influencing emerging market yield spreads. Finally, consideration was given to the possibility of an asymmetric reaction to inflation expectations. The results suggest that emerging markets cannot easily be treated as a single block. Indeed, Asia seems to have de-coupled from other emerging market economies during the global financial crisis. Nevertheless, there are few common determinants of yield spreads across all the markets considered such as volatility, proxied by the VIX indicator, central bank transparency, and the onset of the global financial crisis. Otherwise, there remain considerable idiosyncrasies across the four regions examined in this study such as the role of the exchange rate regime. Interestingly, U.S. monetary policy raises Latin and South American spreads as well as those in Asia region while openness of the economy raises yields in all regions except Europe which has seen its yield spread fall as a result. Expansion of the European Union is a possible explanation for this result. There are clear directions for future research. First, a longer span of data might help decide with greater confidence whether some variant of the chosen specification, which nests all the ones used by other studies, ought to be estimated in levels or first differences, as well as whether omitted error correction terms should be added. Second, more research might reveal better or more precise forms of non-linearity than the simplistic specification considered in this study. Data limitations also prevented estimation with interaction terms that likely also play a role in influencing the course of yield spreads. Finally, alternative strategies to estimate multivariate conditional volatility models might also prove fruitful. The combination of too few panel observations, together with the need to estimate a large number of parameters, proved to be significant obstacles in obtaining useful results.