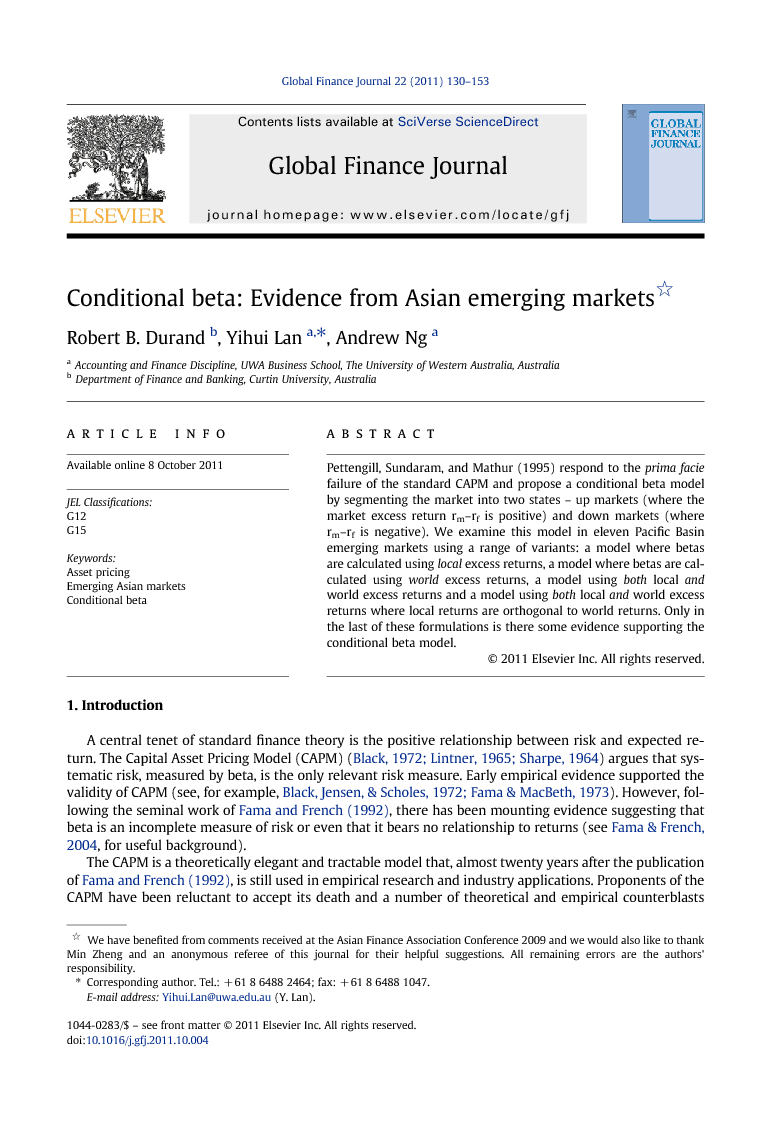 Pettengill et al. (1995) (PSM) note the failure of the standard CAPM and propose a modified methodology that deals with the problem of using realized returns to proxy for expected returns. The data are segmented into up-markets, defined as periods where the market excess return (rm–rf) is positive; and down markets, defined as periods where the market excess return (rm–rf) is negative. This methodology has found some success in uncovering a systematic conditional beta-returns relationship in many markets around the world. This study applied the PSM (1995) segmentation procedure to eleven Pacific Basin emerging markets. We study a number of variations of the segmentation model: a model where betas are calculated using local excess returns, a model where betas are calculated using world excess returns (expressed in local currency), a model using two betas (one calculated using local excess returns and the other calculated using world excess returns) and a model where betas are estimated using local market excess returns which are orthogonal to the world market excess return. We called this last model the orthogonalized hybrid model. Tests of the standard CAPM reported in this study present results that are largely in keeping with those of Fama and French (1992): the standard unconditional beta does appear to be dead in the eleven countries we study. However, in three markets we study – Hong Kong, Korea and Thailand (and also marginally for Sri Lanka) – we find evidence that global systematic risk is priced. We find some evidence supportive of the PSM (1995) dual-hypothesis – that segmentation of the sample will lead to a positive estimated market risk premium in up markets and a negative estimated market risk premium in down markets – in our analyses of the orthogonalized hybrid model (Panel D of Table 8). The analyses appear robust when a size variable is included (Table 9); that is, the size variable adds little to our analysis. We also considered if the conditional betas we study are themselves conditional (that is, whether they vary dynamically as investors' information sets change) following the methodology of Lewellen and Nagel (2006) (Table 10). Although the analyses of the orthogonalized hybrid model reported in Panel D of Table 8 encouraged us, our analysis of the model using the approach of Lewellen and Nagel (2006) leads us to conclude that PSM's model is not a good candidate to model the cross-section of equity returns in the markets we study. Finding that PSM's model is unsupported is at odds with studies we have cited in this literature. Literature supporting PSM is, however, at odds with what might be considered the major stream of thought in empirical asset pricing following Fama and French, 1992 and Fama and French, 1993. The tests in this paper have focussed on emerging markets where returns may be more volatile than other markets; there may be too much noise to get clear readings. Unlike a number of studies that have supported PSM's model, we have also utilized size-based portfolios in the tests reported in this paper. Size was perhaps the first hurdle the standard CAPM failed to jump (Banz, 1981) and, as we noted in the Introduction to this paper, visual inspection of the data (included in the appendix to the paper) suggested that the behaviour we observed for small firms was not in keeping with our expectations. Unlike a number of the studies we have discussed, our tests have also taken care to explicitly address the errors-in-variables problem. We believe that there are some important messages in our study. It is clearly not the case that beta-based models are simply bad (as the mainstream of the literature might suggest): the results for our analyses of the orthogonalized hybrid model indicate that such a conclusion is too strong. The findings in this study suggest that it is important to consider asymmetry between up and down markets in asset pricing tests. Our study also provides evidence for the potential importance of considering world systematic risk in capturing the cross-section of returns. Furthermore, it is clear that asset pricing tests need to consider the information sets used by investors to condition their expectations. Finally, different models are appropriate for different countries. Our study therefore provides a further reminder that a “one size fits all” approach to asset pricing may lead to invalid inferences about investors' expectations of returns and the cost of capital.