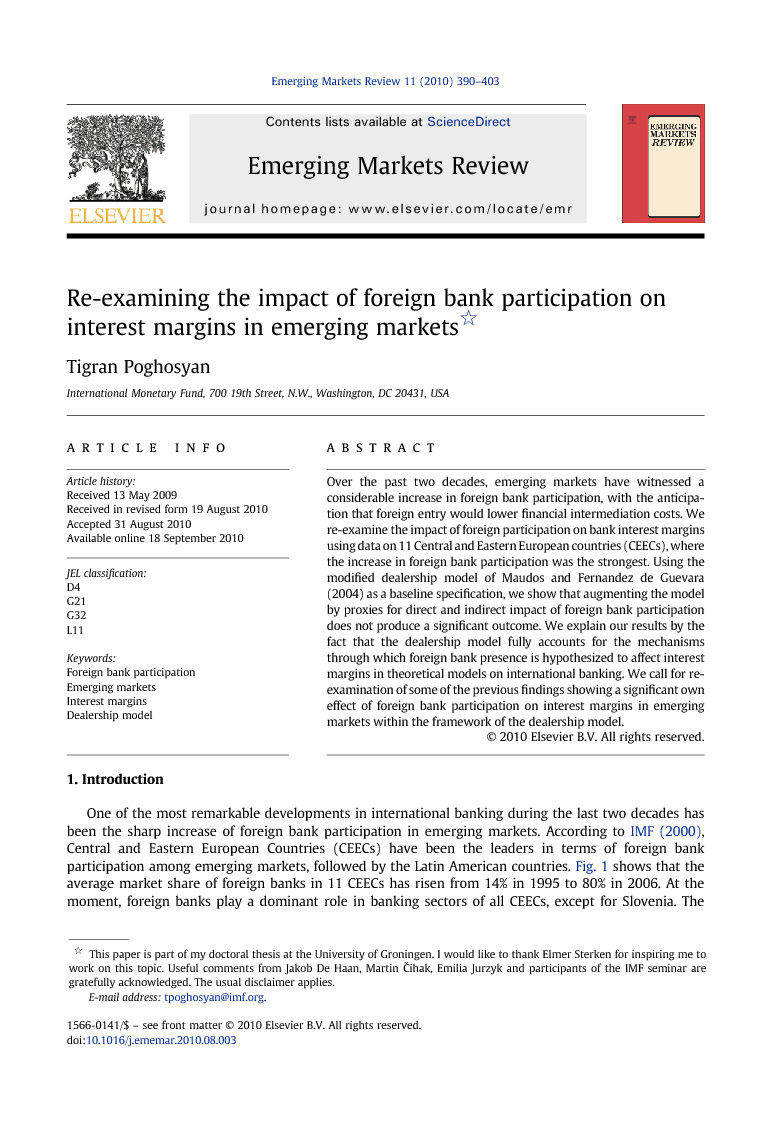 This paper re-examines the impact of foreign bank participation on interest margins in emerging markets using the recent sharp increase of foreign bank presence in CEECs as a laboratory experiment. This topic has been widely debated by the academicians and policymakers in the aftermath of the global financial crisis, during which emerging markets having broader exposure to foreign entry have suffered the most from the capital outflow and the increase in financial intermediation costs. We start by observing that the dealership model widely used in empirical work to provide a quantitative assessment of factors driving the margin in emerging markets does not allow for the impact of foreign bank participation to be explicitly tested. The mechanisms through which foreign bank participation may influence bank behavior and ultimately the margin are analyzed by other models in a framework different from the dealership model. However, the majority of these mechanisms, like market concentration, riskiness of bank portfolio and operational costs, are already taken into account by the margin determinants inspired by the dealership model. This raises the question of whether the foreign bank participation has its own direct and/or indirect impact on interest margins. Previous empirical studies that have attempted to address this question have produced mixed results. Most of the studies report a negative effect, suggesting that foreign participation helps to decrease the margin due to spillover effects and portfolio mix of foreign banks (see for example Martinez Peria and Mody, 2004), while others did not find any significant impact, or even reported a positive impact (see for example Schwaiger and Liebeg, 2008). The mixed results in these studies can be explained by differences in the coverage theoretical determinants inspired by the dealership model entering the specification. Using data on domestic and foreign-owned banks in 11 CEECs, we show that after fully accounting for all interest margin determinants inspired by the dealership model, foreign bank participation does not have any significant impact on interest margins in CEECs. The impact remains insignificant when we differentiate between proxies for indirect (foreign bank market share) and direct (dummy variables for Greenfield and acquired foreign banks) effects of foreign bank presence. We explain this finding by the fact that the variables inspired by the dealership model already account for the main mechanisms through which the impact of foreign bank participation on the margins in emerging economies may be materialized. The main policy implication of these findings is that to contribute to the reduction of financial intermediation costs, policymakers in emerging economies need to focus on policies aimed at reducing credit and market risks, increasing bank efficiency, and improving competitive environment. Opening the borders for foreign entry would not have immediate own impact on interest margins, but can contribute to its reduction if foreign entry boosts market confidence, enhances competition, and improves performance of banks in emerging markets.