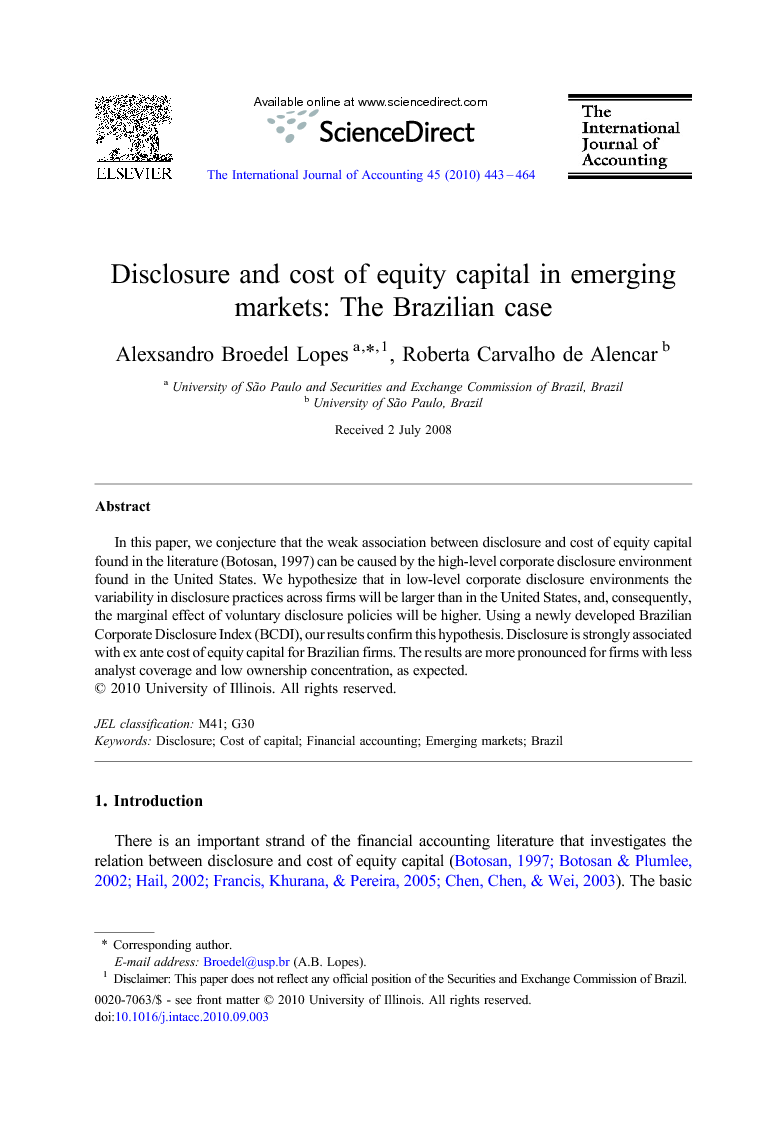 In this paper, we conjecture that the weak association between disclosure and cost of equity capital found in the literature (Botosan, 1997) can be caused by the high-level corporate disclosure environment found in the United States. We hypothesize that in low-level corporate disclosure environments the variability in disclosure practices across firms will be larger than in the United States, and, consequently, the marginal effect of voluntary disclosure policies will be higher. Using a newly developed Brazilian Corporate Disclosure Index (BCDI), our results confirm this hypothesis. Disclosure is strongly associated with ex ante cost of equity capital for Brazilian firms. The results are more pronounced for firms with less analyst coverage and low ownership concentration, as expected.

We investigate the relation between disclosure and cost of capital for Brazilian listed firms. We select the most liquid shares on the São Paulo Stock Exchange (BOVESPA) in 1998, 2000, 2002, 2004, and 2005. To proxy for disclosure level, we built the BCDI, which measures disclosure over six dimensions. To proxy for cost of capital, we use the model proposed by Hail and Leuz (2005) based on Ohlson and Juetnner-Nauroth (2005) and Easton (2004). Using a panel data approach, we show that there is a significant negative association between disclosure and cost of equity capital for the firms in our sample. Additionally, we show that this relation is more pronounced for firms that receive less attention from analysts and have dispersed ownership structures. For these firms, an increase of 1 point in the BCDI results in a decrease of 26 (for firms with less coverage) and 27 (for firms with dispersed ownership) basis points in cost of capital. We also investigate the impact of BCDI scores on the relation between disclosure and cost of capital. While the results are different from those obtained elsewhere, this work has implication for a number of groups. To financial executives, it shows that increased levels of disclosure result in inferior cost of capital, especially for firms that receive less attention from analysts. For regulators, our results demonstrate that firms with superior growth opportunities will adopt better disclosure practices voluntarily even if they are immersed in weak governance and accounting regimes. We also contribute to a recent strand of the international accounting literature that investigates the determinants of the properties of actual reports. This literature (Ball et al., 2000, Ball et al., 2003 and Ball and Shivakumar, 2005) has shown that the properties of published accounting numbers depend more on the incentives managers face to provide informative numbers than on standards and regulations. Our results confirm the hypothesis that firm-level incentives also play a significant role on firms' financial reporting practices.