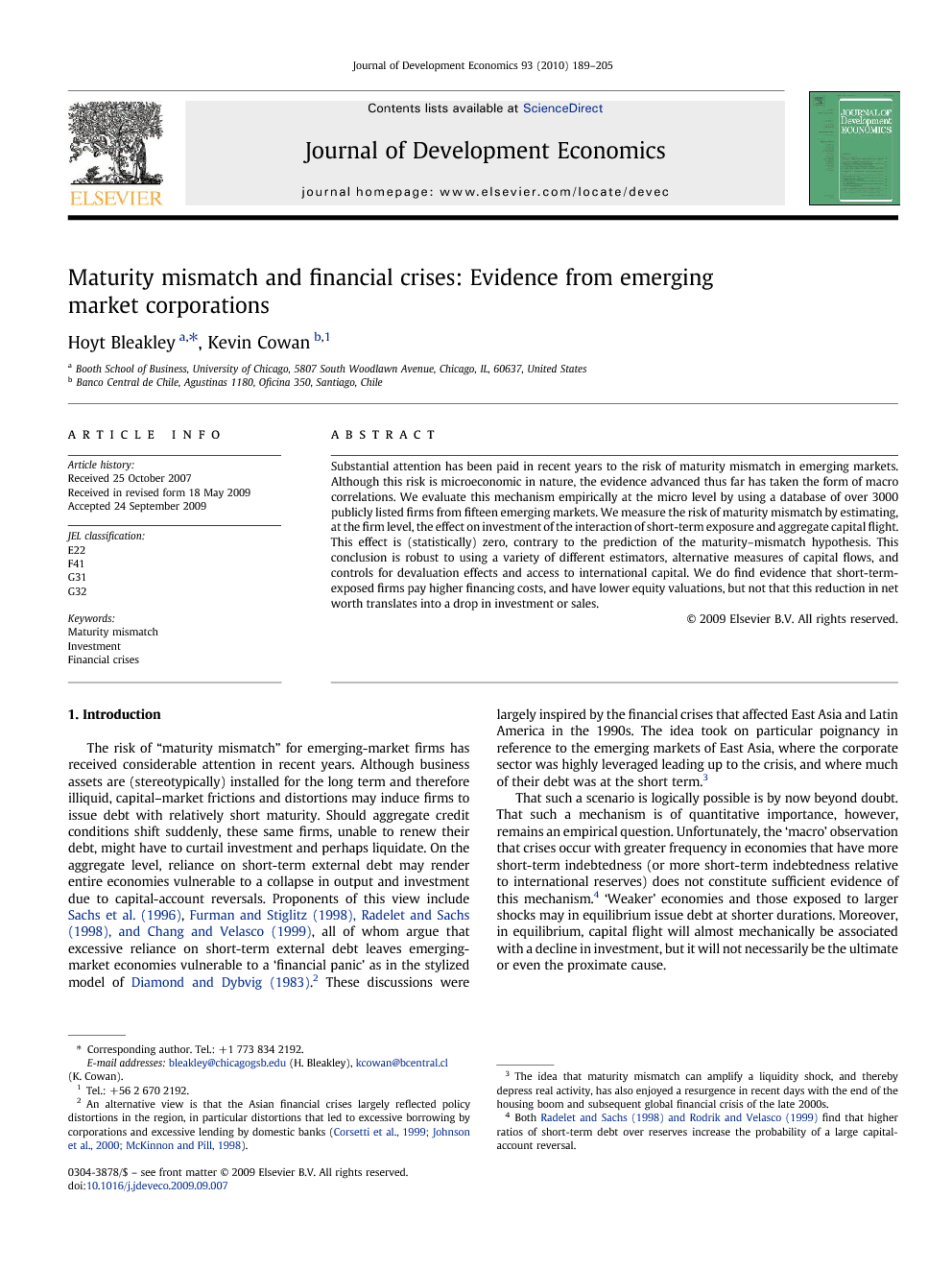 Substantial attention has been paid in recent years to the risk of maturity mismatch in emerging markets. Although this risk is microeconomic in nature, the evidence advanced thus far has taken the form of macro correlations. We evaluate this mechanism empirically at the micro level by using a database of over 3000 publicly listed firms from fifteen emerging markets. We measure the risk of maturity mismatch by estimating, at the firm level, the effect on investment of the interaction of short-term exposure and aggregate capital flight. This effect is (statistically) zero, contrary to the prediction of the maturity–mismatch hypothesis. This conclusion is robust to using a variety of different estimators, alternative measures of capital flows, and controls for devaluation effects and access to international capital. We do find evidence that short-term-exposed firms pay higher financing costs, and have lower equity valuations, but not that this reduction in net worth translates into a drop in investment or sales.

Existing macroeconomic evidence identifies a positive correlation between short-term external debt (scaled by GDP or reserves) and balance of payment crises or sudden stops, the argument being that short-term debt renders the economy vulnerable to foreign investor ‘panics’, or amplifies the impact of shocks to the supply of external capital. However, this correlation does not imply causality, as short-term debt may well be a symptom rather than the cause of the sudden stops. For example, suppose the sudden stop has been preceded by a domestic demand boom. In the run-up to the sudden stop, there are unsustainably high levels of consumption and investment. The fundamental cause of the fall in capital flows is a correction of this boom, which is mostly driven by the correction of domestic demand. In this scenario, there should be no differential impact across more or less liquid firms. In contrast, suppose instead that the sudden stop is a country-wide liquidity shock. The central tenet of the maturity-mismatch ‘meme’ is that firms with greater maturity mismatch have to adjust their real activity more severely. Using micro data from emerging-market corporations, we examine the response of investment to aggregate capital flows. We do not find robust and statistically significant differences in the investment response among firms with very different levels of potential exposure to the flight of capital from the country. This evidence casts doubt on the importance of corporate-level maturity mismatch in these countries — and the role of financial panics — in recent financial crises. We obtain a series of additional results that we believe merit further research. First, we find that some categories of firms do experience large drops in investment during capital-account reversals. This is the case of highly leveraged firms — a result that is consistent with research that emphasizes over-borrowing in the run-up to the crisis as a key driving factor in the ensuing collapse. Second, we find that short-term exposure does have effects on firm outcomes. In periods of capital outflows those firms in our sample with higher exposure: accumulate more debt, incur higher interest costs, have lower non-operational income, and sell-off assets with larger mark-downs and suffer larger drops in their book to market ratio. Moreover, we find that firms with higher exposure are more likely to enter a merger or be acquired by another firm. Many of these results suggest that important transfers of wealth take place within the economy (and potential across borders as well), but that these transfers do not translate into changes in investment and production decisions.