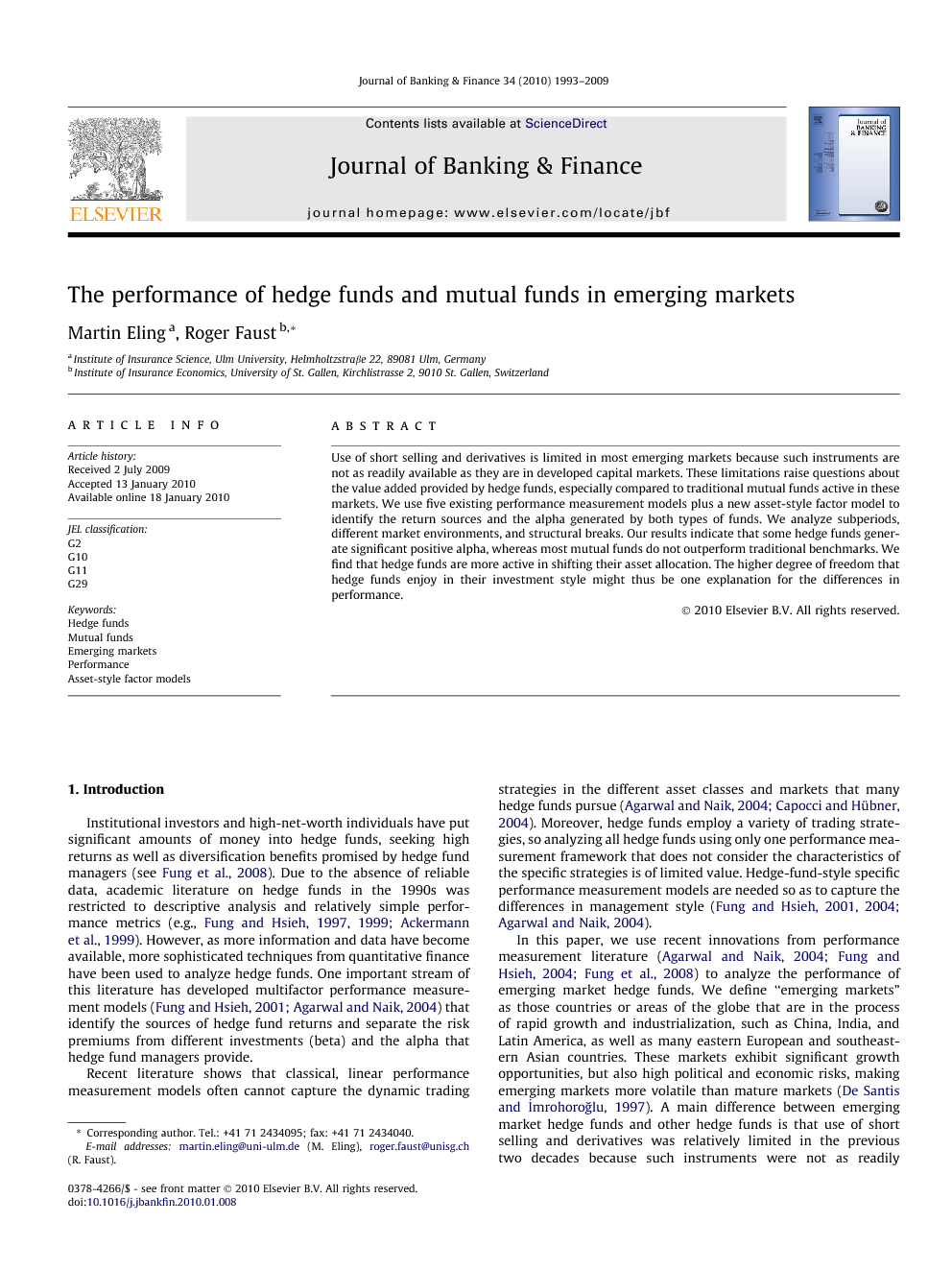 Use of short selling and derivatives is limited in most emerging markets because such instruments are not as readily available as they are in developed capital markets. These limitations raise questions about the value added provided by hedge funds, especially compared to traditional mutual funds active in these markets. We use five existing performance measurement models plus a new asset-style factor model to identify the return sources and the alpha generated by both types of funds. We analyze subperiods, different market environments, and structural breaks. Our results indicate that some hedge funds generate significant positive alpha, whereas most mutual funds do not outperform traditional benchmarks. We find that hedge funds are more active in shifting their asset allocation. The higher degree of freedom that hedge funds enjoy in their investment style might thus be one explanation for the differences in performance.

The contribution of this paper is twofold: In a first step, we develop an asset class factor model to describe the performance of hedge funds and mutual funds investing in emerging markets. Our results indicate that the market-related factors chosen for our model are much better at explaining the variation in emerging market returns than are non emerging market specific factor models presented in the literature and that they are slightly better than the emerging market specific model of Abugri and Dutta (2009). Our model explains a large proportion of the variation in both mutual fund and hedge fund returns. The second contribution of this paper is to employ various factor models to compare returns of hedge funds and mutual funds active in emerging markets. We find that hedge funds provide both higher returns and alphas than do traditional mutual funds. These findings are in line with other recent literature (Abel and Fletcher, 2004 and Strömqvist, 2007). In general, some hedge funds tend to outperform the benchmarks, but most traditional mutual funds do not. One possible reason could be more active management of hedge funds than of mutual funds. We find support for this hypothesis from the tests for structural breaks, the factor exposure, and from the analysis of the performance in different market environments. Regarding structural breaks, we only find significant breakpoints for hedge funds but not for mutual funds. This indicates that hedge funds are adjusting their risk taking while mutual funds are not. The factor exposure of hedge funds, which we reveal using a rolling regression, shows that hedge funds have a more volatile exposure, supporting the idea of a more active management. The analysis of different market environments shows that hedge funds provide to some extent downside protection in contrast to mutual funds that have a rather constant exposure to market movements. In conclusion, it seems that emerging market hedge funds are more active in shifting their asset allocation, probably since they are less restricted by their investors in investment style and policy. Furthermore, it is plausible that hedge fund style shifts have been especially pronounced in the most recent period (post 2006) since more alternative instruments, such as options and futures, are becoming available in emerging markets and hedge funds are not restricted in using them. It might thus also be that emerging market hedge funds now behave more like other hedge funds (see Abugri and Dutta, 2009), but we believe that additional research with more recent data is necessary to confirm this assertion, since the last, most recent subperiod analyzed is relatively short. However, investors need to be aware that (aside from the differences in their flexibility regarding asset allocation) there are numerous reasons which might be responsible for the performance difference between mutual funds and hedge funds, including the use of leverage, lock-up periods, and incentive fees for hedge fund managers. Lock-up periods are also a good example to emphasize the higher degree of freedom hedge fund managers enjoy in making investment decisions. For example, hedge funds might invest in illiquid positions and capture liquidity risk premiums, actions not allowed to traditional mutual funds (see Ding et al., 2009, for an analysis of liquidity in the hedge fund context). In case of illiquid investments, investors need to be aware that hedge fund managers might smooth their returns (see Getmansky et al., 2004), which might bias performance measurement results.26 Kouwenberg and Ziemba (2007) illustrate that incentive fees and manager’s own investment in the fund substantially affect the investment strategy of hedge fund managers. Both these elements are not widespread with traditional mutual funds. Furthermore, hedge funds are not subject to much regulation. Hedge funds in the United States are usually set up as limited partnerships, a legal form only lightly regulated, and hedge funds outside the United States are usually domiciled offshore, a practice that has both regulatory and tax advantages. All these advantages make hedge funds the more flexible investment scheme, both as to investment strategy and markets in which to invest. During the financial crisis hedge funds have been severely criticized and it is not clear whether future regulation in the financial services sector might diminish these regulatory advantages of hedge funds.27 Overall, it thus seems that a combination of technical problems (e.g., return smoothing) and economic advantages (e.g., higher flexibility and lower regulation) might account for the observed performance differences between hedge funds and mutual funds. The factor model developed in this paper can be put to a number of different uses. First, investors can use the model to identify well-performing funds in which to invest. Although past performance is not necessarily an indicator of future returns, investors heavily rely on past performance when making investment decisions (see Capon et al., 1996). Second, the model can be a tool for determining manager compensation as the model can detect whether a fund’s performance is mainly attributable to passive investment style or something more proactive. The model makes it possible to reward managers for only those returns superior to a specific benchmark, and thus attributable to the fund manager’s skill. Third, the model can be used for risk management as revealing the underlying assets will help identify the true risk of a fund. This might be especially relevant in identifying a drift in management style; catching any such changes early will help keep a portfolio both safe and profitable.