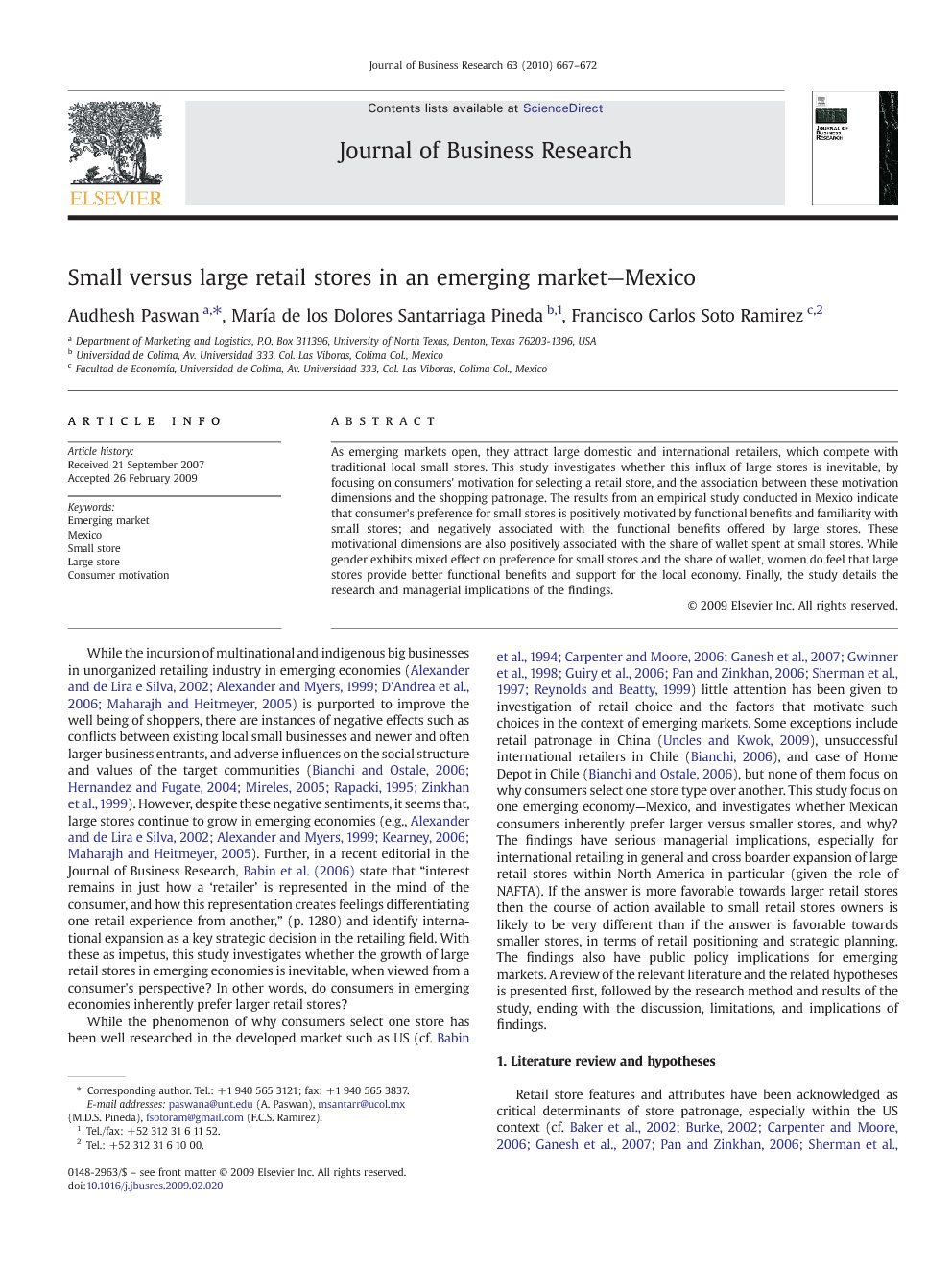 As emerging markets open, they attract large domestic and international retailers, which compete with traditional local small stores. This study investigates whether this influx of large stores is inevitable, by focusing on consumers' motivation for selecting a retail store, and the association between these motivation dimensions and the shopping patronage. The results from an empirical study conducted in Mexico indicate that consumer's preference for small stores is positively motivated by functional benefits and familiarity with small stores; and negatively associated with the functional benefits offered by large stores. These motivational dimensions are also positively associated with the share of wallet spent at small stores. While gender exhibits mixed effect on preference for small stores and the share of wallet, women do feel that large stores provide better functional benefits and support for the local economy. Finally, the study details the research and managerial implications of the findings.

While the incursion of multinational and indigenous big businesses in unorganized retailing industry in emerging economies (Alexander and de Lira e Silva, 2002, Alexander and Myers, 1999, D'Andrea et al., 2006 and Maharajh and Heitmeyer, 2005) is purported to improve the well being of shoppers, there are instances of negative effects such as conflicts between existing local small businesses and newer and often larger business entrants, and adverse influences on the social structure and values of the target communities (Bianchi and Ostale, 2006, Hernandez and Fugate, 2004, Mireles, 2005, Rapacki, 1995 and Zinkhan et al., 1999). However, despite these negative sentiments, it seems that, large stores continue to grow in emerging economies (e.g., Alexander and de Lira e Silva, 2002, Alexander and Myers, 1999, Kearney, 2006 and Maharajh and Heitmeyer, 2005). Further, in a recent editorial in the Journal of Business Research, Babin et al. (2006) state that “interest remains in just how a ‘retailer’ is represented in the mind of the consumer, and how this representation creates feelings differentiating one retail experience from another,” (p. 1280) and identify international expansion as a key strategic decision in the retailing field. With these as impetus, this study investigates whether the growth of large retail stores in emerging economies is inevitable, when viewed from a consumer's perspective? In other words, do consumers in emerging economies inherently prefer larger retail stores? While the phenomenon of why consumers select one store has been well researched in the developed market such as US (cf. Babin et al., 1994, Carpenter and Moore, 2006, Ganesh et al., 2007, Gwinner et al., 1998, Guiry et al., 2006, Pan and Zinkhan, 2006, Sherman et al., 1997 and Reynolds and Beatty, 1999) little attention has been given to investigation of retail choice and the factors that motivate such choices in the context of emerging markets. Some exceptions include retail patronage in China (Uncles and Kwok, 2009), unsuccessful international retailers in Chile (Bianchi, 2006), and case of Home Depot in Chile (Bianchi and Ostale, 2006), but none of them focus on why consumers select one store type over another. This study focus on one emerging economy—Mexico, and investigates whether Mexican consumers inherently prefer larger versus smaller stores, and why? The findings have serious managerial implications, especially for international retailing in general and cross boarder expansion of large retail stores within North America in particular (given the role of NAFTA). If the answer is more favorable towards larger retail stores then the course of action available to small retail stores owners is likely to be very different than if the answer is favorable towards smaller stores, in terms of retail positioning and strategic planning. The findings also have public policy implications for emerging markets. A review of the relevant literature and the related hypotheses is presented first, followed by the research method and results of the study, ending with the discussion, limitations, and implications of findings.