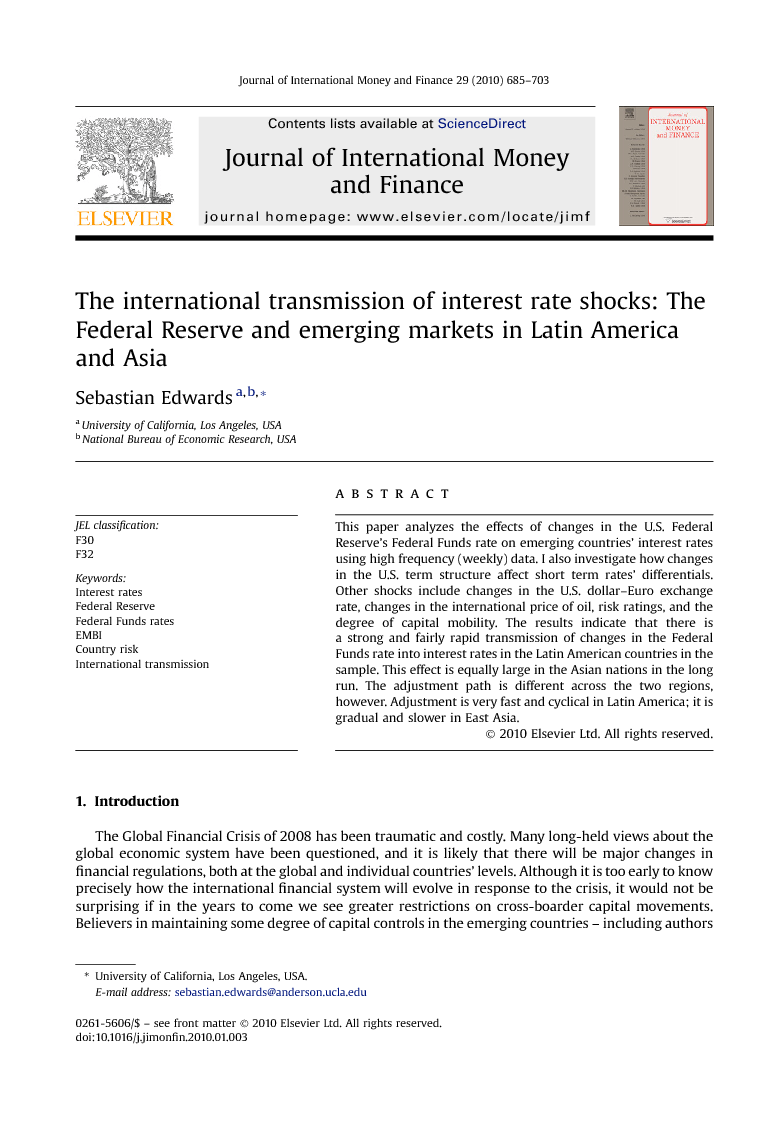 This paper analyzes the effects of changes in the U.S. Federal Reserve's Federal Funds rate on emerging countries' interest rates using high frequency (weekly) data. I also investigate how changes in the U.S. term structure affect short term rates' differentials. Other shocks include changes in the U.S. dollar–Euro exchange rate, changes in the international price of oil, risk ratings, and the degree of capital mobility. The results indicate that there is a strong and fairly rapid transmission of changes in the Federal Funds rate into interest rates in the Latin American countries in the sample. This effect is equally large in the Asian nations in the long run. The adjustment path is different across the two regions, however. Adjustment is very fast and cyclical in Latin America; it is gradual and slower in East Asia.

The Global Financial Crisis of 2008 has been traumatic and costly. Many long-held views about the global economic system have been questioned, and it is likely that there will be major changes in financial regulations, both at the global and individual countries' levels. Although it is too early to know precisely how the international financial system will evolve in response to the crisis, it would not be surprising if in the years to come we see greater restrictions on cross-boarder capital movements. Believers in maintaining some degree of capital controls in the emerging countries – including authors such as Krugman, 1995, Bhagwati, 1998 and Stiglitz, 2002, and Rodrik (2006), among others – have argued that these restrictions keep speculative capital out and protect countries from the vagaries of international financial markets.1 In order to understand the way in which possible reforms to the international financial architecture will affect different countries and outcomes, it is necessary to have a well founded idea on how the system actually operated in the period immediately preceding the Great Crash of 2008. An important question, in that regard, refers to the international transmission of interest rate changes. A particularly significant issue is to what extent, and how rapidly (if at all), changes in the advanced countries policy interest rates – changes in, say, the Federal Reserve's Federal Funds rate – are transmitted into emerging countries.2 Equally important is how changes in the advanced countries term structure of interest rates affect financial conditions (including interest rates) in the emerging nations. In this paper I use high frequency (weekly) data for eight emerging countries – four from East Asia and four from Latin America – to investigate these issues. The analysis focuses on the differentials between domestic and (properly adjusted by currency and country risk) international interest rates. More specifically, I use panel-data to investigate how changes in interest rates by the Federal Reserve affected interest rate differentials in Brazil, Chile, Colombia, Mexico, Indonesia, Korea, Malaysia and the Philippines in the period spanning from the first week of January 2000, to the last week of September 2008. Understanding the extent to which interest rate changes are transmitted across countries is important for determining emerging countries' ability to conduct independent monetary policy. Central banks in the emerging markets – and in the advanced countries, for that matter – are interested in controlling the level of interest rates in their respective nations. That is, these central banks are interested in determining by how much their countries' domestic interest rates diverge from world interest rates. For example, countries that are suffering a burst of inflation will like to have a positive (and presumably large) differential with respect to international interest rates. Likewise, countries that experience an increase in unemployment will want to reduce this interest rate differential and, in some cases, make it negative. An important question, then, and one addressed in this paper, is the extent to which interest rate differentials in emerging nations are affected by policy actions in the advanced nations.3 Previous work on this topic includes, among others, Hausmann et al., 1999, Frankel et al., 2004, Shambaugh, 2004 and Miniane and Rogers, 2007 and Edwards and Rigobón (2009). Many of these authors have investigated whether the extent to which interest rate shocks are transmitted differs under alternative exchange rate regimes. According to traditional views – going back at least to the Mundell–Fleming model – countries with fixed regimes cannot undertake independent monetary policy. More recently, however, some authors, including Frankel et al. (2004), have argued that countries with flexible exchange rate do not have true monetary autonomy.4 This paper differs from previous work on the international transmission of interest rate shocks in several respects. First, I use high frequency (weekly) data, while most earlier papers on the subject – including Shambaugh (2004), and Frankel et al. (2004) – have relied on either monthly or annual data. Focusing on high frequency data allows me to investigate in great detail the dynamics of adjustment, and to analyze with a certain degree of precision how quickly interest rate shocks generated in the United States are transmitted into the emerging countries. Second, I investigate whether changes in the United States term structure of interest rates have an impact on emerging markets' short term interest rates. Third, I make an explicit distinction between Latin American and Asian countries and I compare, in great detail, both the final effect of international rate shocks, as well as the dynamic effects. And fourth, and in contrast with many previous works on the subject – such as Hausmann et al., 1999 and Shambaugh, 2004, and Frankel et al. (2004), and Miniane and Rogers (2007) – I concentrate almost exclusively on countries with a flexible exchange rate regime – the exception being Malaysia. The reason for this is that most emerging countries had abandoned fixed exchange rates prior to the beginning of my sample period (2000). The rest of the paper is organized as follows: in Section 2 I present the conceptual framework used in the analysis and I provide a first look at the data. Section 3 contains the basic estimation results. In this section I compare the results for the Latin American and East Asian nations. I also investigate how changes in the U.S. yield curve affect domestic credit market conditions in these eight countries, and ask whether the vagaries of global currency markets – and, in particular, changes in the U.S. dollar–Euro exchange rate – affect domestic interest rates in emerging countries. In Section 4 I investigate whether the international transmission of interest rate shocks is affected by the extent of capital mobility and capital account restrictions. In Section 5 I expand the analysis further by investigating how changes in Federal Fund's interest rate impact the “unadjusted” interest rate differential between the emerging markets in the sample and the United States. That is, I focus on the simple differential between emerging countries' and U.S. interest rates. In Section 6 I deal with some extensions and discuss directions for future research. Finally, in Section 7 I offer some concluding remarks.