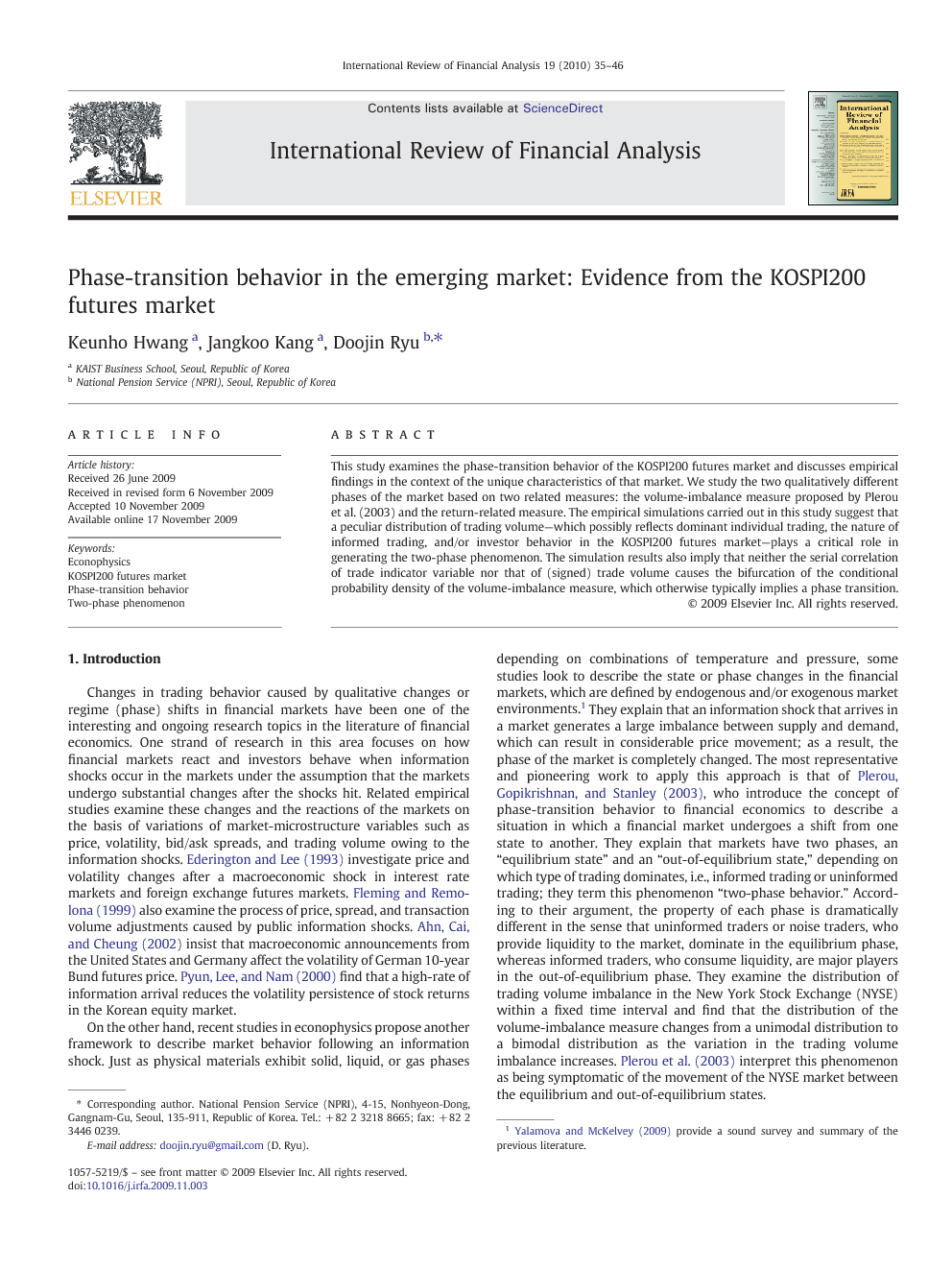 This study examines the phase-transition behavior of the KOSPI200 futures market and discusses empirical findings in the context of the unique characteristics of that market. We study the two qualitatively different phases of the market based on two related measures: the volume-imbalance measure proposed by Plerou et al. (2003) and the return-related measure. The empirical simulations carried out in this study suggest that a peculiar distribution of trading volume—which possibly reflects dominant individual trading, the nature of informed trading, and/or investor behavior in the KOSPI200 futures market—plays a critical role in generating the two-phase phenomenon. The simulation results also imply that neither the serial correlation of trade indicator variable nor that of (signed) trade volume causes the bifurcation of the conditional probability density of the volume-imbalance measure, which otherwise typically implies a phase transition.

This study investigates the phase-transition behavior of the KOSPI200 futures market based on the volume-imbalance measure of Plerou et al. (2003) and the log-return of transaction price—the latter is newly introduced in this paper as a measure of phase-transition behavior. To the best of our knowledge, this study is the first to examine phase-transition behavior in the derivative market and discuss the empirical results within the context of the unique properties of trading behavior observed in that market. While the serial correlations (or transition probabilities) of the trade indicator variable, the individual transaction volume, or the signed trading volume have been proven to have no relationship with the observed phase-transition behavior, the results of our simulation experiments indicate that the unique distribution of individual transaction volume and signed trade volume in the futures market directly cause the bifurcation of the conditional PDF of the volume-imbalance measure; the implication therein is the existence of two distinct phases in the market. The distributions of the two trading volume measures, the individual transaction volume and the signed trade volume, are possibly affected by the unique trading activities of the futures market: informed trading based on market-wide information, interdependent trader behavior such as herding, and dominant trades initiated by individual investors. Our findings reveal that phase-transition behavior is not a unique characteristic of developed markets such as the NYSE market. It is more prominently observed in the KOSPI200 futures market, which represents the world's well-developed and successful emerging derivative markets. Many emerging markets reportedly exhibit trading behavior or activity similar to the KOSPI200 futures market, in terms of market structure, investor participation rate, and/or history. Emerging markets are purely order-driven and have relatively short trading histories. They also have a common feature in trading activity: active individual trading. In the Taiwan market, for example, the participation rate of domestic individual investors is relatively high, like in the KOSPI200 futures market. Individual investors are also dominant in the Turkish derivative market, and the regulators and policy-makers thereof have reportedly tried to benchmark the KOSPI200 futures and options market to foster active trading. We thus expect to find a similar multi-phase phenomenon in emerging markets. Further study is required in this respect.