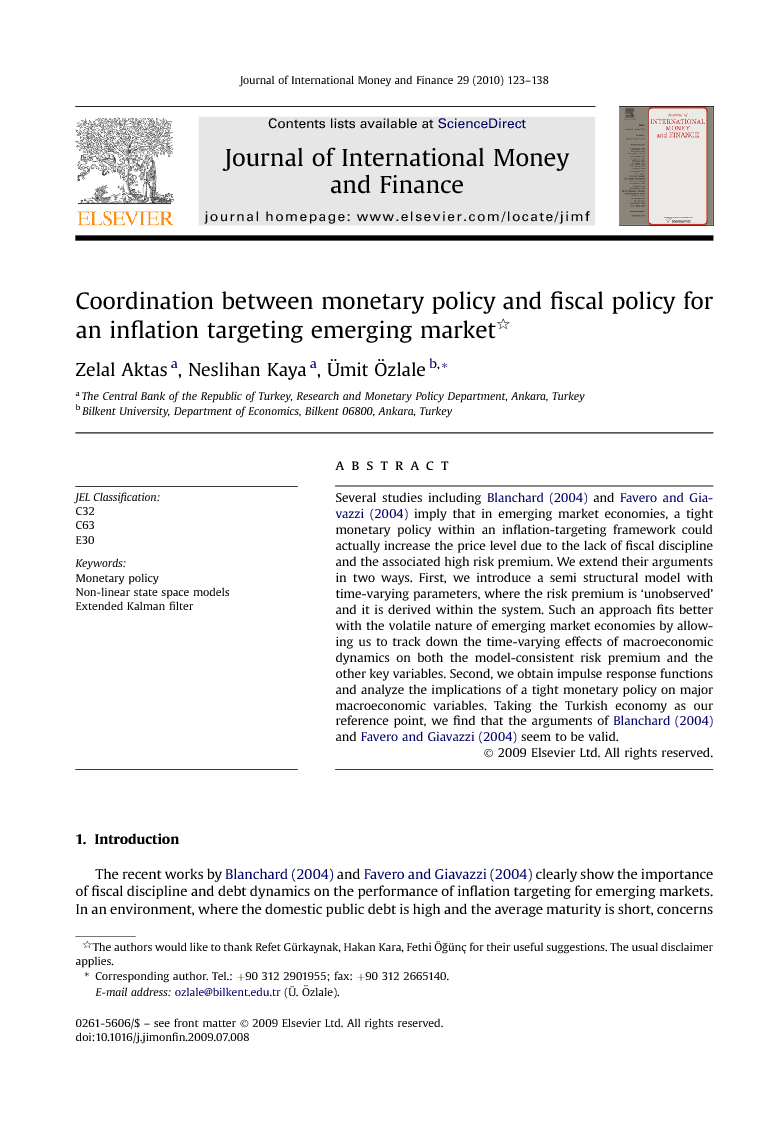 Several studies including Blanchard (2004) and Favero and Giavazzi (2004) imply that in emerging market economies, a tight monetary policy within an inflation-targeting framework could actually increase the price level due to the lack of fiscal discipline and the associated high risk premium. We extend their arguments in two ways. First, we introduce a semi structural model with time-varying parameters, where the risk premium is ‘unobserved’ and it is derived within the system. Such an approach fits better with the volatile nature of emerging market economies by allowing us to track down the time-varying effects of macroeconomic dynamics on both the model-consistent risk premium and the other key variables. Second, we obtain impulse response functions and analyze the implications of a tight monetary policy on major macroeconomic variables. Taking the Turkish economy as our reference point, we find that the arguments of Blanchard (2004) and Favero and Giavazzi (2004) seem to be valid.

The recent works by Blanchard (2004) and Favero and Giavazzi (2004) clearly show the importance of fiscal discipline and debt dynamics on the performance of inflation targeting for emerging markets. In an environment, where the domestic public debt is high and the average maturity is short, concerns about debt sustainability increase the risk premium significantly. Such a case poses a problem for monetary policy: a tighter policy associated with higher real interest rates would increase the debt service burden and could actually lead to capital outflows and eventually to a depreciation of the domestic currency by increasing the default risk. Then, given the high degree of exchange rate pass-through, which is another common characteristic of the emerging markets, the depreciation of the domestic currency increases the price level. As a result, the “price puzzle”, which stems from the misidentification of VAR models in the literature, can actually emerge as a structural characteristic of emerging market economies, which implement tight monetary policies. The argument above relies heavily on the operation of the uncovered interest rate parity condition in an unconventional way. Thus, developing an accurate measure of risk that reflects especially the fiscal performance of the economy emerges as a critical issue. In this context, the EMBI spread, prepared by JP Morgan has been used as the risk premium measure in many empirical studies. Intended principally for portfolio management purposes, this spread provides a measure of pure sovereign default risk and is constructed as excess promised returns on the United States Treasury. However, it is still an open question whether the changes in the EMBI spreads are exclusively due to the fiscal performance of the economy. There are other factors as well which lead to significant movements in these spreads. Firstly, as Calvo (2003) argues, domestic factors appear to be irrelevant in explaining the EMBI spreads once the U.S. corporate spreads are taken into account. His study implies that the main determinant of this spread is “the risk appetite” of foreign investors. Secondly, EMBI spreads are highly sensitive to political news. Even in cases where political developments have temporary or negligible effects on the structure of the economy, sharp changes in the EMBI spreads are observed. Moreover, the bonds that form the EMBI spread typically have long maturities that do not reflect the government's fiscal flow position, which is another critical factor. Consequently, it can be argued that EMBI spreads reflect not only the fiscal side developments but also the external factors and the political news. Therefore, the changes in the EMBI spreads cannot be viewed as being derived solely from fiscal fundamentals. Finally, EMBI spreads are weighted averages that are not based on a structural model. However, as Ferrucci (2003) mentions, the default probability, thus the fiscal performance, depends on many macroeconomic factors such as the average maturity of the debt, risk-free interest rates, the country's leverage ratio and the expected future primary surpluses. Furthermore, there are several studies that analyze the interaction between fiscal policy and exchange rate policy.1 Consequently, it may provide insightful results if the risk premium associated mainly with the domestic factors could be derived from a structural model, which includes the above factors and is consistent with the overall characteristics of the economy. In this paper, consistent with the above arguments, we treat the ‘risk premium’ as an unobserved variable and derive it from a system of equations with time-varying parameters. In that sense, we obtain a ‘model consistent’ risk premium from a system which is designed to reflect the characteristics of an inflation-targeting emerging market economy with fiscal problems. A time-varying parameter framework is preferred since it will better fit with the volatile macroeconomic environment and the frequent structural changes in these economies. Such a methodology also allows us to track down the time-varying effects of macroeconomic dynamics on both the risk premium and other related variables. We also generate the impulse response functions and analyze the implications of the monetary policy on the system as a whole. As will be clarified later, another contribution of this paper lies in the estimation methodology. Since the ‘unobserved’ risk premium and the time-varying parameters need to be simultaneously estimated, the state space representation of the model will have a non-linear characteristic, where the standard Kalman Filter fails to be appropriate. Then, the Extended Kalman filter (EKF), which is designed for the estimation of such non-linear systems, is employed. Finally, since the above-mentioned papers stress the importance of fiscal performance on the success of monetary policy, for the application, an emerging market that reflects such characteristics should be chosen. We believe that the Turkish economy stands out as a very good example: After the collapse of the exchange rate-based stabilization program in February of 2001, the Turkish economy witnessed its deepest financial crisis, along with a huge debt burden. After the detrimental effects of the crisis ended, the Central Bank started to implement a form of implicit inflation-targeting regime together with intense efforts to lower the debt burden.2 Thus, the Turkish economy seems to incorporate all the characteristics that are necessary to this study, such as a volatile macroeconomic environment with fiscal problems and a form of inflation-targeting framework. The following section provides a brief overview of the Turkish economy for the 1999–2006 period with special emphasis on the debt structure. The structural model is described and the estimation procedure is introduced in the next section. Then, the estimation results and the impulse response functions are discussed. The final section concludes the paper.

Several studies including Blanchard (2004) and Favero and Giavazzi (2004) clearly show the role of debt dynamics on the performance of inflation targeting. These studies imply that the presence of a ‘risk premium’ channel could actually cause the price level to increase when the central bank follows a tight monetary policy. In this study, we extend their arguments in two ways. First, we derive a ‘model consistent’ risk premium from a system of equations with time-varying parameters. Such an approach both reflects the volatile nature of emerging market economies and allows us to track down the time-varying effects of macroeconomic dynamics on the risk premium. Second, we obtain impulse responses and analyze the implications of fiscal discipline on monetary policy. We take the Turkish economy as our laboratory for this study. The results indicate that the estimated risk premium series is consistent with the path that the Turkish economy followed for the sample period. More importantly, by analyzing the time-varying parameter estimates and the impulse response functions, we can see that fiscal dynamics plays a very important role in the effectiveness of the monetary policy. These results also imply that as long as there is an improvement in the fiscal discipline, the uncovered interest rate parity condition operates in the expected direction.