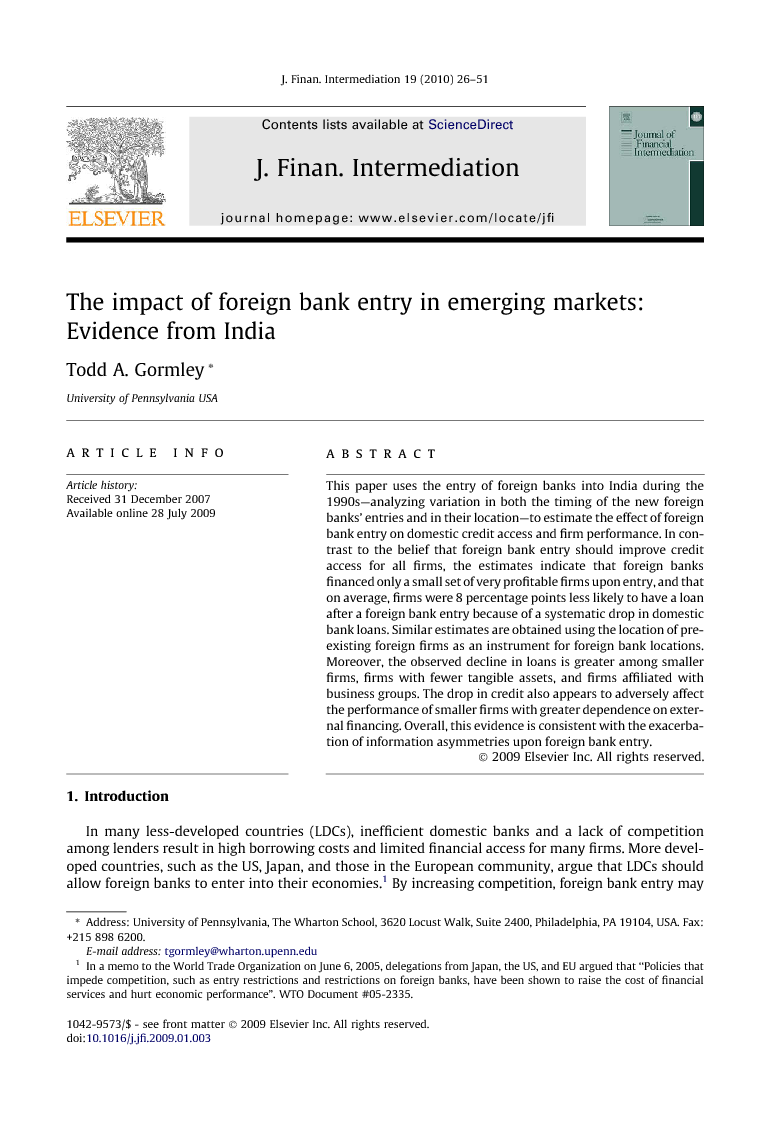 This paper uses the entry of foreign banks into India during the 1990s—analyzing variation in both the timing of the new foreign banks’ entries and in their location—to estimate the effect of foreign bank entry on domestic credit access and firm performance. In contrast to the belief that foreign bank entry should improve credit access for all firms, the estimates indicate that foreign banks financed only a small set of very profitable firms upon entry, and that on average, firms were 8 percentage points less likely to have a loan after a foreign bank entry because of a systematic drop in domestic bank loans. Similar estimates are obtained using the location of pre-existing foreign firms as an instrument for foreign bank locations. Moreover, the observed decline in loans is greater among smaller firms, firms with fewer tangible assets, and firms affiliated with business groups. The drop in credit also appears to adversely affect the performance of smaller firms with greater dependence on external financing. Overall, this evidence is consistent with the exacerbation of information asymmetries upon foreign bank entry.

The entrance of new foreign banks to India is associated with a reallocation of loans that is not necessarily a boon to the lion’s share of domestic firms. The most profitable 10% of firms located near a new foreign bank branch received larger loans, but on average, firms were 7.6 percentage points less likely to have a long-term loan of any size following the entry of a foreign bank. This limited increase in loan sizes appears to arise from new foreign bank loans targeted primarily towards the most profitable firms. The decline in credit for all other firms, however, originates from a systematic drop in domestic bank loans. The findings are robust to using a number of different specifications, control variables, and instrumentation, and the timing of the loan reallocation coincides with foreign bank entry within each district. Moreover, the decline in domestic credit appears to be driven by shifts in the supply of loans rather than the demand for loans. This reallocation of loans following foreign bank entry in India suggests that information asymmetries in the market for loans are a significant factor in LDCs. While credit access is improved for many very profitable firms, the extent and nature of the drop in loans to informationally opaque firms, as captured by a firms’ size and group affiliation, suggests that some firms with positive net present value projects may have found it difficult to obtain loans after foreign bank entry. Furthermore, the reduction in credit also appears to adversely affect the performance of smaller firms located in industries requiring greater external financing. A larger decrease in the size of loans allocated to firms with fewer tangible assets after foreign bank entry also indicates that domestic lenders relied more heavily on collateralized loans after foreign entry. While the potential benefits of foreign bank entry are many, the evidence suggests that information asymmetries may prevent many firms in these economies from realizing these benefits, which is consistent with recent theoretical work by Detragiache et al. (2008) and Gormley (2007). This finding parallels an existing literature that examines the comparative disadvantage of large banks in the production and use of ‘soft’ information (Berger et al., 2005), and the potential effects that greater competition may have on the lending relationships that small and medium-sized entrepreneurs rely on (Boot and Thakor, 2000 and Petersen and Rajan, 1995). Since this study focuses on foreign bank entry via de novo branching, however, the policy implications may not necessarily apply to cases where foreign bank entry instead occurs through mergers and acquisitions. Recent theoretical work suggests that the adverse affects of foreign bank entry may be more likely to occur when foreign bank entry is limited to de novo branching (Gormley, 2007). Overall, the empirical findings presented in this paper suggest that a proper sequencing of reforms in developing economies may be necessary to realize the benefits of foreign lender entry when foreign bank entry occurs via de novo branches. Specifically, reducing information barriers prior to foreign lenders’ entry may improve the allocation of credit following liberalization and increase the range of firms foreign banks are willing to finance upon entry. For example, policymakers may consider strengthening accounting disclosure rules and promoting the development of credit evaluating agencies. By reducing banks’ costs of obtaining information about firms, such policies may increase the range of firms foreign banks finance and reduce the scope for a systematic drop in loans from domestic banks in response to increased competition.