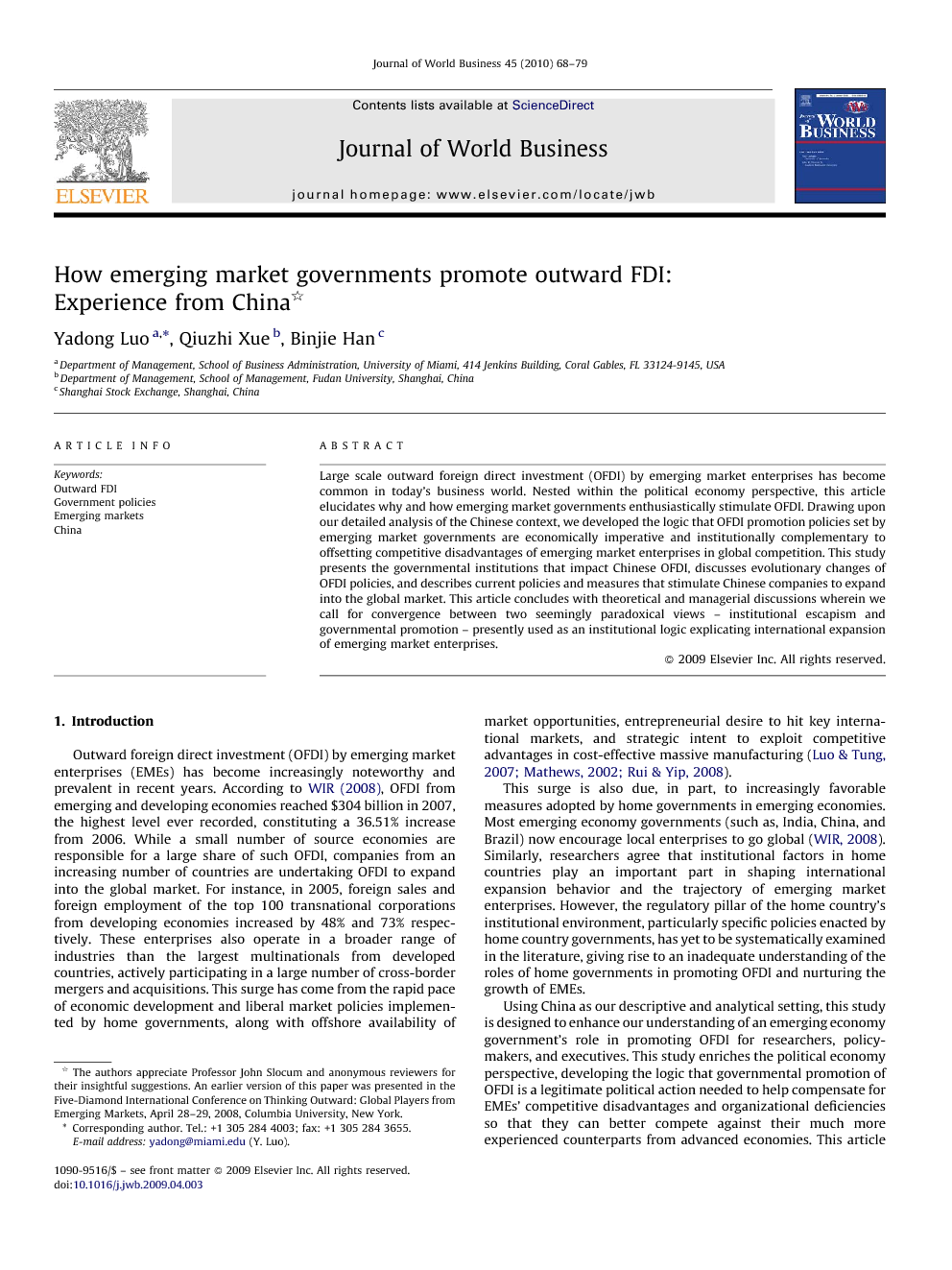 Outward foreign direct investment (OFDI) by emerging market enterprises (EMEs) has become increasingly noteworthy and prevalent in recent years. According to WIR (2008), OFDI from emerging and developing economies reached $304 billion in 2007, the highest level ever recorded, constituting a 36.51% increase from 2006. While a small number of source economies are responsible for a large share of such OFDI, companies from an increasing number of countries are undertaking OFDI to expand into the global market. For instance, in 2005, foreign sales and foreign employment of the top 100 transnational corporations from developing economies increased by 48% and 73% respectively. These enterprises also operate in a broader range of industries than the largest multinationals from developed countries, actively participating in a large number of cross-border mergers and acquisitions. This surge has come from the rapid pace of economic development and liberal market policies implemented by home governments, along with offshore availability of market opportunities, entrepreneurial desire to hit key international markets, and strategic intent to exploit competitive advantages in cost-effective massive manufacturing (Luo and Tung, 2007, Mathews, 2002 and Rui and Yip, 2008). This surge is also due, in part, to increasingly favorable measures adopted by home governments in emerging economies. Most emerging economy governments (such as, India, China, and Brazil) now encourage local enterprises to go global (WIR, 2008). Similarly, researchers agree that institutional factors in home countries play an important part in shaping international expansion behavior and the trajectory of emerging market enterprises. However, the regulatory pillar of the home country's institutional environment, particularly specific policies enacted by home country governments, has yet to be systematically examined in the literature, giving rise to an inadequate understanding of the roles of home governments in promoting OFDI and nurturing the growth of EMEs. Using China as our descriptive and analytical setting, this study is designed to enhance our understanding of an emerging economy government's role in promoting OFDI for researchers, policymakers, and executives. This study enriches the political economy perspective, developing the logic that governmental promotion of OFDI is a legitimate political action needed to help compensate for EMEs’ competitive disadvantages and organizational deficiencies so that they can better compete against their much more experienced counterparts from advanced economies. This article also illuminates that an emerging economy's government, such as China, is a critical institution that should and can leverage institutional support (financial and non-financial) to EMEs in the process of global competition wherein these businesses suffer from late-mover disadvantages, shortfalls in distinctive capabilities, and liabilities of newness and foreignness. More importantly, how emerging economy governments spur the process of OFDI is vital because it determines the actual effectiveness of both policymaking and growth of EMEs. Finally, this article is written for international executives who need to know specific measures emerging economy governments currently adopt so that their businesses can take advantage of these measures or lobby their own governments to mimic what other country governments (like China's) do in creating a more conducive climate to launch offshore FDI. As the world's leading emerging economy, in terms of market size and growth rate, China is an ideal country to illustrate why and how governments in emerging economies promote OFDI. China represents an appropriate lens through which we can examine the relationship between regulative institutions and OFDI. Over the past 30 years, China has evolved from a marginal player to an important source of OFDI among developing countries. Using China as the illustrative setting, we show why emerging market governments are important institutions in accentuating OFDI and stimulating the growth of EMEs, and how the Chinese government specifically promotes OFDI for the interest of national economic development as well as for the growth of individual Chinese firms.

This study draws upon political economy theory to underpin our premise that emerging market governments can, and should, play an important role in promoting OFDI and helping EMEs redress the firms’ competitive disadvantages in global competition. A recent survey conducted by the Asia Pacific Foundation of Canada and the China Council for the Promotion of International Trade found China's “going global” strategy to be the second most important driving force behind Chinese OFDI today (WIR, 2006). This article, of course, is only a descriptive piece addressing the growing role of emerging market governments in spurring OFDI. Further research is needed to advance this line of inquiry, both theoretically and empirically. For instance, literature on business-government relationships in international business largely focuses on MNE-host country government interfaces, neglecting MNE-home country government interactions (Ramamurti, 2001). OFDI by EMEs can be an excellent setting in which to analyze this neglected but much needed issue, advancing our understanding of business-politics linkages in world business. Additionally, there is dearth of research on corporate politics for emerging market multinationals in dealing with home country governments. It is warranted to probe how EMEs shape or reshape new government policies toward OFDI and how they subsequently respond or react to government policies once the latter are formulated. Per the logic of institutional process theory (Oliver, 1991), both government policies and corporate political behavior in reacting to these policies may jointly influence EMEs’ OFDI and ongoing activities. In addition, it would be interesting to examine the antecedent, concurrent, and consequent factors of emerging market governments’ OFDI policies. There should be multilevel factors triggering governments to foster OFDI; identifying these factors is essential for us to understand governmental behaviors that affect business activities in other countries. Similarly, knowing the concurrent process of policy making is important because it helps EMEs identify the areas (policies, institutions, or processes) they can offensively influence so that these new policies are better aligned with their business interests. Outcomes of government policies also warrant academic attention, as it is a vital issue to not only EMEs, but also policymakers. It is likely that the government policy-OFDI relationship is structurally causal and longitudinally evolutionary in nature, with both ends being mutually reinforcing and temporally shifting. Finally, it is encouraged to compare the processes and outcomes of government policies toward OFDI among multiple emerging economies, particularly the major ones, e.g. Brazil, Russia, India, China, and Mexico. As noted, institutional setups differ among these economies, as do consequences of governmental policies in affecting OFDI. Such country-level variations can be further complicated by the likelihood that EMEs from different countries may differ in motives, strategies, and capabilities in international expansion, and that these firm-level differences may exacerbate country-level variations.