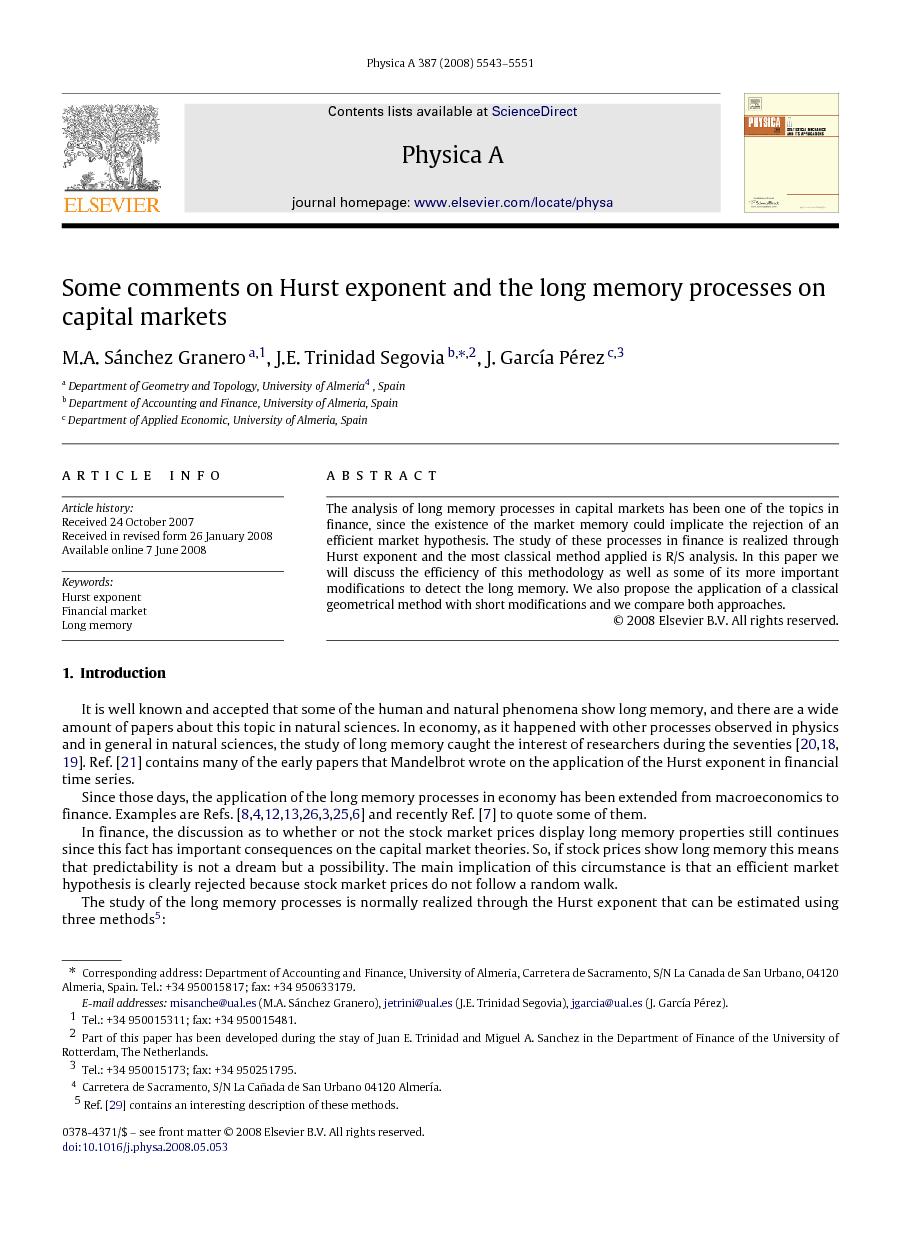 The analysis of long memory processes in capital markets has been one of the topics in finance, since the existence of the market memory could implicate the rejection of an efficient market hypothesis. The study of these processes in finance is realized through Hurst exponent and the most classical method applied is R/S analysis. In this paper we will discuss the efficiency of this methodology as well as some of its more important modifications to detect the long memory. We also propose the application of a classical geometrical method with short modifications and we compare both approaches.

It is well known and accepted that some of the human and natural phenomena show long memory, and there are a wide amount of papers about this topic in natural sciences. In economy, as it happened with other processes observed in physics and in general in natural sciences, the study of long memory caught the interest of researchers during the seventies [20], [18] and [19]. Ref. [21] contains many of the early papers that Mandelbrot wrote on the application of the Hurst exponent in financial time series. Since those days, the application of the long memory processes in economy has been extended from macroeconomics to finance. Examples are Refs. [8], [4], [12], [13], [26], [3], [25] and [6] and recently Ref. [7] to quote some of them. In finance, the discussion as to whether or not the stock market prices display long memory properties still continues since this fact has important consequences on the capital market theories. So, if stock prices show long memory this means that predictability is not a dream but a possibility. The main implication of this circumstance is that an efficient market hypothesis is clearly rejected because stock market prices do not follow a random walk. The study of the long memory processes is normally realized through the Hurst exponent that can be estimated using three methods 5: 1. R/S Analysis. 2. Detrended Fluctuation Analysis. 3. Periodogram Regression. Our main objective in this paper is to prove that the most popular method used to estimate the Hurst exponent, the R/S analysis, exhibits serious problems and as a result it is possible to obtain evidence of long memory in random series. To avoid these problems, two geometrical methods are introduced to be applied in capital markets. One of them (GM1) is based on a classical formulae of Hurst exponent while the other one (GM2) is based on a new formulae which is introduced in Section 4 and developed further in the Appendix. We will show how this methodology will allow us to study the presence of the long memory processes in the capital markets from a stricter point of view. Regarding the R/S analysis, a new approach to the application of the Anis and Lloyd’s formula in [1] is introduced to solve the problems presented when subintervals of small lengths are used. The organization of the paper is as follows: In Section 2 we introduce the Hurst exponent basis as well as the R/S analysis to calculate it. In Section 3 we study R/S analysis behavior in the particular case of random series. Section 4 presents a different approach to obtain the Hurst exponent and it is compared with R/S and the modified R/S analysis. The paper continues with an empirical application using the different approaches and finally Section 6 presents the main conclusions.

To conclude, we will like to point out that this paper presents several theoretical and empirical results about the calculation of the Hurst exponent. Two methods, GM1 and GM2, are proposed. We prove that in both cases they are correct in an asymptotic way (Appendix contains the proof for GM2) and show empirical evidence via Monte Carlo simulations that they are also accurate for short series. Any other result provided, for example the distribution of the Hurst exponent calculated by GM2 can be approximated by a normal one; that GM1 and specially GM2 are more accurate than R/S analysis, or the sensibility of HH to a non-zero mean, is also empirical. A theoretical proof of these results should be very interesting as a base for further research. Since the calculation of HH is used in other fields, the two methods proposed can be useful, especially if the series contains few data. From our point of view, it is clear that using R/S analysis to determine the Hurst exponent can lead to incorrect results if it is not carried out carefully, and evidence of long memory can be obtained in random series. Results contained in this paper shows that the influence of series length is very important in the Hurst exponent calculation when R/S analysis is used. Table 1 shows that Hurst exponent is nearer 0.5 when more than 5000 data are used, which, in financial series, means data from about 20 years. However, even in this case, standard deviation is 0.13 which means that a Hurst exponent of 0.64 does not necessarily involve the presence of memory in the series. It is clear that exhibited deviations by R/S analysis are more significant if we bear in mind that several articles such as Refs. [15], [22] and [24] or Ref. [14], obtain the Hurst exponent values close to 0.7. In the case of the Spanish market, for example, Blasco and Santamaria [5] reported evidence of long range dependence in Madrid Stock Exchange with the Hurst exponent values around 0.60 in the different sectorial indexes. The study represents a sample of 14 years, which means around 3500 data. If we observe Table 3 in the case of 3000 data the Hurst exponent calculated using R/S analysis has an average of 0.52 with a standard deviation of 0.12. With regard to our formulation, by the opposite, gives satisfactory results when it is applied over random series, so it seems to be suitable. On the other hand, we proved that if GM2 is used, the distribution of the Hurst exponent of a random series can be approximated by a normal one, which allows determining confidence intervals for HH. Previous papers in the line of studying the underlying distribution of the Hurst exponent of random walks are Refs. [6] and [28]. It seems clear that HH, calculated using GM1 and GM2 is sensible to the series average value (in fact, to the variation coefficient), so this fact has to be considered in robust analysis, because this means that a random series could apparently show memory, when what really happens is that the mean is not zero. In financial series, it means that in large horizons there will be a positive (or negative if the mean was negative) gain. Regarding the methodology proposed to apply modified R/S analysis introduced by Anis and Lloyd [1], the obtained results show better accuracy than classic R/S analysis, but, as it can be observed in Table 4 and Table 5, GM2 gives better results, especially with short series. The empirical application shows that, once the influence of the average is deleted, there is no evidence of long memory in the analysed financial data, so we cannot conclude that the series are not random. If these results are accepted as valid, Indexes follows a random walk in which the mean of the returns can be different from 0. Finally, we would like to remark that the main goal of this paper is just to indicate that results obtained for HH using R/S analysis can lead to erroneous conclusions, as well as to provide simple tools for more consistent and accurate results in financial data.