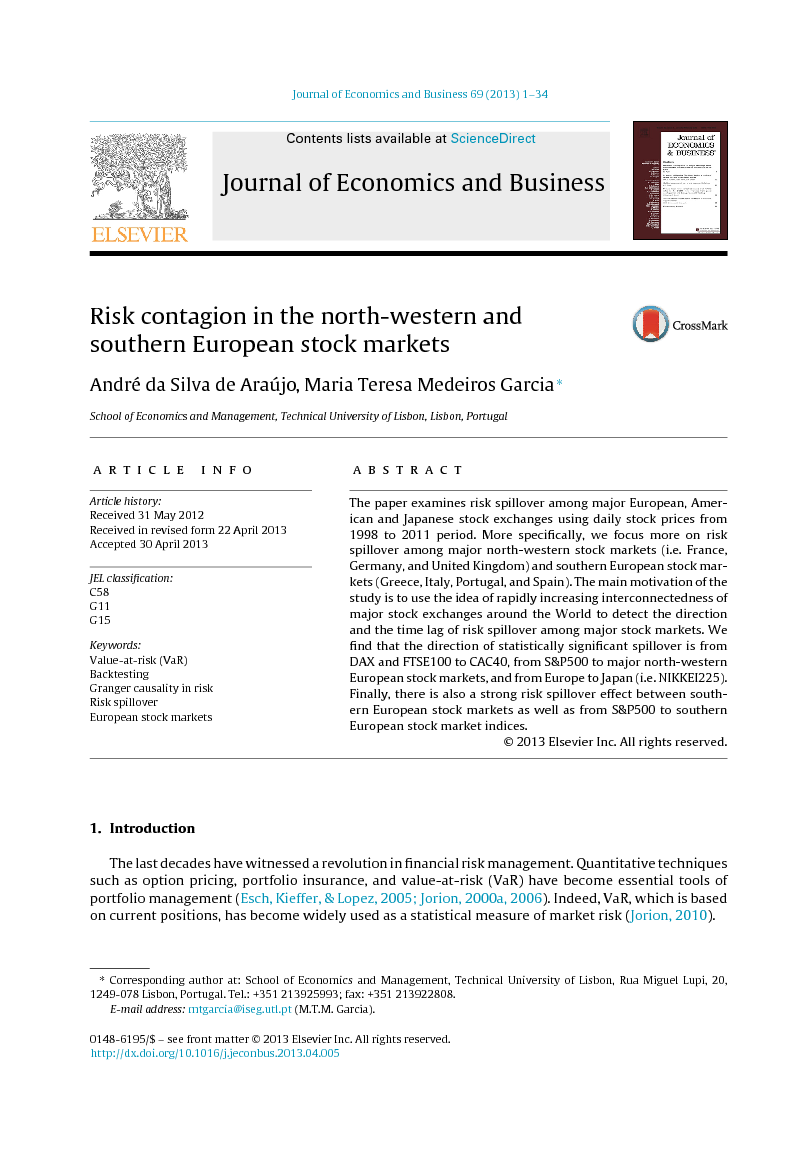 The last decades have witnessed a revolution in financial risk management. Quantitative techniques such as option pricing, portfolio insurance, and value-at-risk (VaR) have become essential tools of portfolio management (Esch et al., 2005, Jorion, 2000a and Jorion, 2006). Indeed, VaR, which is based on current positions, has become widely used as a statistical measure of market risk (Jorion, 2010). Increasingly, with globalization of the economy, it is likely that market risks will transfer from one market to another. This has become apparent especially since the 2008 global financial crisis period. The probability of a large adverse market movement is always of great practical concern when monitoring financial risk. Large market movements can occur due to market uncertainty, policy changes, surprising news or shocks, speculative attacks, and/or spillover from other markets (e.g. financial contagion). Extreme market movements lead large amounts of capital to change hands among investors. Some examples of such large market movements include the terrorist attacks in September 11, 2001, the bankruptcies of the Long Term Capital Management (Jorion, 2000b), Enron, Worldcom, Salomon Brothers, Citigroup, and Dexia (Groen, 2011), as well as the collapse of Lehman Brothers (De Haas & Van Horen, 2012). In addition, the outbreak of the Greek financial crisis in 2009–2010 and the resulting transmission of financing strains to other countries including Portugal, Ireland, and Spain are among the events that led to large market movements. In view of this situation, it is important to investigate the risk spillover effect among various international financial markets. A greater understanding of such risk would be of great significance to identify future trends of financial market returns, and thus help to aid policy makers. The motivations for this research are as follows. First, there are no published papers that have analyzed simultaneously the north-western European financial markets (France, Germany and the United Kingdom) and the southern European financial markets (Greece, Italy, Portugal, and Spain), despite concern over the recent developments in the European sovereign debt crisis, namely the risk spillover from Greece in the European and world economies (Blundell-Wignall & Slovik, 2011). In addition, this research takes into account the United States’ and the Japanese main stock markets on account of their link with European markets as a potential source of risk contagion. In fact, the severe global impact of the recent financial crises has intensified the need to understand how country specific shocks are transmitted to other countries. The only paper that addresses the risk of spillover between stock markets is that of Hong, Cheng, Liu, and Wang (2003). They examine whether and how extreme downside market risk is transmitted between the Chinese stock market and overseas capital markets. Their paper focuses on risk spillover among the Chinese stock markets, risk spillover among Greater China, risk spillover between the Chinese stock market and Asian capital markets, and risk spillover between the Chinese stock market and the international stock markets of the USA and Germany. Secondly, it is important to understand the mechanism of how risk spillover occurs across different markets for financial risk management. When monitoring financial risk, the effect of a large adverse market movement is always of great practical concern. Indeed, when a large loss has occurred in another market or portfolio, risk managers of relevant financial institutions – namely insurance companies and pension funds – should be concerned with whether an incurred loss for a portfolio will exceed a certain value. This issue is of paramount importance for the economic development of the European zone, and it therefore merits analysis. Thirdly, the present research encompasses the period 1998–2011, which enables us to focus on the impact of the 2008 crisis on the European stock market. Finally, the investigation of risk and causality in stock markets could contribute to enhancing the development of new methods and instruments of risk management. In this paper, we provide an empirical study on the spillover of extreme downside market risk among different stock markets in Europe, USA and Japan. We find that a strong risk spillover exists from DAX and FTSE100 to CAC40, and the occurrence of a large downside risk in S&P500 can help predict the occurrence of a similar future risk in the three main European stock markets. There is also a strong risk spillover from ATHEX20 to IBEX35 and PSI20. We also find contagion from S&P500 to ATHEX20 and IBEX35. By contrast, MIB and PSI20 affect S&P500. Our findings suggest that there is a contagion effect among the European countries. Moreover, countries with high deficits and in recession, as are the case of Italy and Portugal, may cause a contagion effect in the Eurozone, giving rise to concern in the USA. Given that the recent financial bailout of Greece aimed to contain the contagion and restore confidence in the system, systemic risk is real (Nanto, 2009). Our results also indicate that the crisis which originated in the USA market quickly spread to Europe, which suggests that, in terms of large adverse market movements, the European stock markets have ties with the American stock market. By contrast, the link with the Japanese equity market seems weak, resulting in a non constant risk spillover. This study is structured as follows. Section 2 reviews the literature on VaR and on extreme risk spillover. Section 3 presents the volatility methods and models to determine VaR. This section also introduces the backtesting concept as well as the concept of Granger causality in risk. Section 4 presents the data, the empirical results and a discussion of these. Section 5 provides some concluding remarks.

With the events that triggered the global financial crisis of 2008, financial markets around the world were at the centre of a most severe risk contagion. For this reason, the permanent control and monitoring of extreme risk in foreign markets becomes increasingly vital for successful risk management and, in most cases, for the survival of financial institutions, namely insurance companies and pension funds. Increasingly, the motivations for market risk modelling are evident. Indeed, risk modelling provides support for the market risk regulatory environment as well as for internal risk control. In order to guarantee effective financial risk management and investment diversification, it is important to understand the mechanism through which risk spillover has occurred between different financial markets. In fact, risk is expected to transmit across markets when they are integrated and suffer from a global shock. In addition, risk spillover can occur as a result of the attempts of market participants to infer price changes in other markets via high trading volumes. In this case, a large price change in one market may bring about a large price change in another market, regardless of the evolution of market fundamentals. In order to bring more evidence to the issue of risk spillover, we considered two groups of European stock markets as well as USA and Japan stock markets, due to the link between these countries. The period under analysis covers the financial crisis of 2008 and the sovereign debt crisis that has affected some Eurozone countries and which sparked further motivation for our research. The indices CAC40, DAX, FTSE100, S&P500, NIKKEI225, ATHEX20, IBEX35, MIB, and PSI20 display volatility clustering, which suggests the presence of heteroskedasticity. To accommodate these features we fitted AR processes to the conditional average, and three models were adopted to estimate the conditional variance: the GARCH, the EGARCH, and the TARCH models. Validation of the models was conducted through several measures. To this end, it was necessary to carry out daily forecasts. The performance evaluation shows that the assumption of normality produces very weak results. As expected, it seems that Student's-t is a better choice overall. The results concerning the detection of Granger causality in risk between financial markets show that the USA stock market is immune to the risk stemming from the three north-western European indices, but not to the risk stemming from southern Europe. Indeed, S&P500 affects European markets. This may be due to the large direct financial holdings of US banks and firms in most European counterparts. However, in the opposite direction, only MIB and PSI20 were found to affect S&P500. Unfortunately, the test used does not allow us to identify exactly when such contagion took place, and although a full explanation for the existence of this contagion is beyond the scope of the paper, there is surely no unique explanation. Possible factors may lie in investor reactions to news on the fragility of the euro and political uncertainty within the relevant countries. In addition, the sovereign debt crisis in several countries may have contributed. None of these factors should be seen in isolation. The extreme negative shocks in Japan do not affect the other markets although Japan is sensitive to all the European stock markets analyzed. Further research is necessary to shed more light on these results.