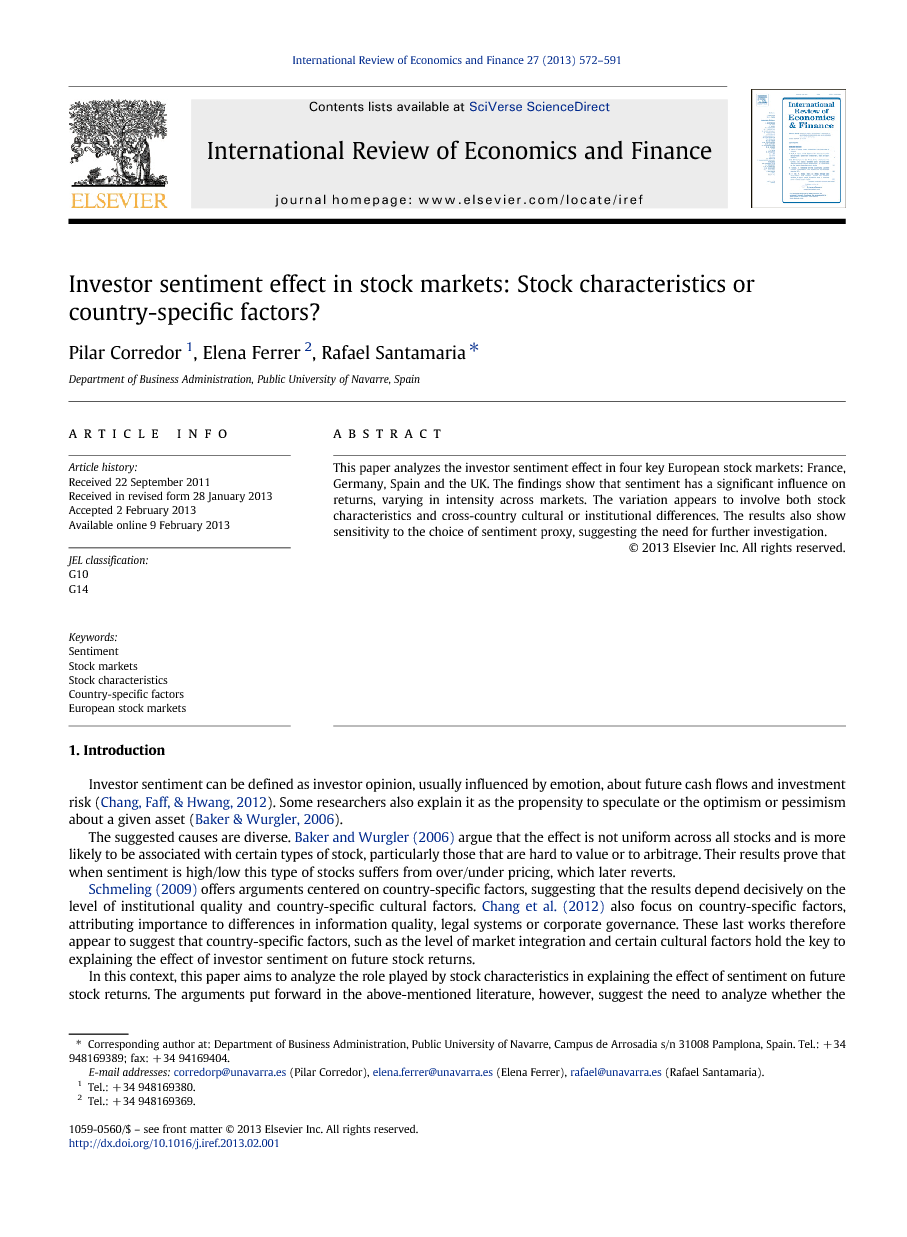 This paper analyzes the investor sentiment effect in four key European stock markets: France, Germany, Spain and the UK. The findings show that sentiment has a significant influence on returns, varying in intensity across markets. The variation appears to involve both stock characteristics and cross-country cultural or institutional differences. The results also show sensitivity to the choice of sentiment proxy, suggesting the need for further investigation.

Investor sentiment can be defined as investor opinion, usually influenced by emotion, about future cash flows and investment risk (Chang, Faff, & Hwang, 2012). Some researchers also explain it as the propensity to speculate or the optimism or pessimism about a given asset (Baker & Wurgler, 2006). The suggested causes are diverse. Baker and Wurgler (2006) argue that the effect is not uniform across all stocks and is more likely to be associated with certain types of stock, particularly those that are hard to value or to arbitrage. Their results prove that when sentiment is high/low this type of stocks suffers from over/under pricing, which later reverts. Schmeling (2009) offers arguments centered on country-specific factors, suggesting that the results depend decisively on the level of institutional quality and country-specific cultural factors. Chang et al. (2012) also focus on country-specific factors, attributing importance to differences in information quality, legal systems or corporate governance. These last works therefore appear to suggest that country-specific factors, such as the level of market integration and certain cultural factors hold the key to explaining the effect of investor sentiment on future stock returns. In this context, this paper aims to analyze the role played by stock characteristics in explaining the effect of sentiment on future stock returns. The arguments put forward in the above-mentioned literature, however, suggest the need to analyze whether the sentiment effect depends on stock characteristics, country-specific factors, or a combination of the two. The results of individual analyses by country or by stock characteristics can be difficult to interpret. Let us consider a characteristic-based analysis (size, btm, volatility, dividends,…) and two countries, A and B. If the results indicate, for example, that the impact of market sentiment on size portfolio returns is stronger in country A than in B, there is no way to know whether this result is to be attributed to the stock characteristic (size) or to the country effect. Clearer conclusions to support one explanation or the other could be drawn by using controls for country effects or, alternatively, if the characteristic (size) has the same dispersion in both countries. Otherwise, either cause is possible. The commonest solution for determining which effect is responsible involves the analysis of portfolios that are neutral to one of the variables, say the country, or the use of techniques to isolate the effect. Results obtained using methods such as these enable assessment of the specific role of each variable, in this case the stock characteristic (size). If the results do not indicate impact of investor sentiment on portfolio returns but the analysis by individual countries reveals a significant country effect, the latter is obviously the sole cause. Significant returns obtained after controlling for the country effect will be entirely attributable to the stock characteristic. In the latter case, strategies that track cross-market dispersion in the characteristic in question will help to test for an additional effect relating to country-specific cultural or institutional factors. This paper contributes in various ways to the financial literature. Firstly, it uses a set of tests, including country-neutral strategies and multilevel regression, in order to determine whether stock characteristics, country-specific factors, or a combination of the two can explain the intensity of the investor sentiment effect on future stock returns. As far as we are aware, this matter has not been addressed previously, since the literature has approached the problem by analyzing the two possible causes separately. Secondly, it performs separate analyses of four key European markets, France, Germany, Spain and the United Kingdom. Most previous studies on this subject have reported on sets of countries that are widely diverse in terms of financial development. Their findings may therefore be due to differences of this nature rather than to market-specific cultural and institutional factors. Our intention in considering four countries with similar levels of financial development is to enable us to eliminate any effects arising from disparities in this respect. Finally, another contribution of this paper is that it analyzes the role of the overall US and European investor sentiment and includes a robustness test of the importance of the choice of the sentiment indicators in the construction of the investor sentiment proxy. We performed further analyses using direct measures of investor sentiment. The remainder of the paper proceeds as follows. Section 2 presents the literature review. Section 3 describes the database and the basic structure of the investor sentiment proxy. Section 4 presents a parametric discussion of the results for the individual markets. Section 5 analyzes whether the investor sentiment effect depends on the stocks or country being analyzed. Section 6 contains a discussion of the various issues involved in the choice of proxies for investor sentiment, and comments on the influence on results. Finally, Section 7 outlines the main conclusions of the study.

In this paper, we focus only on European markets because we wish to control for the level of financial development. The separate analysis of these four markets shows that investor sentiment has a significant effect on the future returns of stocks that are hard to value and more costly and risky to arbitrage. Nevertheless, the results differ across the countries considered and they highlight the sensitivity of the results to the choice of sentiment index. The study subsequently analyzes the role played by stock characteristics and country-specific factors in explaining this effect. By controlling for country-specific effects, we find that stock characteristics are very relevant in explaining the effect of investor sentiment on stock returns. Nevertheless, we find that they are not the only variable underlying cross-country differences in sentiment effects, since other factors, such as cultural or institutional differences may also play a key role. This suggests potential bias in the results of studies that consider several countries without controlling for one or other of these dimensions, since both are sources of investor sentiment. The importance of the choice of sentiment proxy is also very evident. Overall, the results obtained using the proxy developed by Baker and Wurgler (2006) are the clearest in revealing the effect of investor sentiment on sentiment-sensitive stock. However, the choice of variables for the construction of the proxy also plays a key role, as revealed by the considerable difference in results that takes place after adding or removing certain variables. Due to some missing data for the European markets considered, there are differences in the construction of the BW and SENT EU indices. In light of the sensitivity of the results to the choice of index variables, therefore, we are unable to confirm whether the reason for the greater explanatory capacity of the BW index is that the US market is a greater generator and spreader of investor sentiment or simply that the data used to construct the European indices lacks sufficient richness. The results using direct measures of investor sentiment, while showing some sensitivity to the choice of proxy, lead to similar conclusions. The direction of future research needs to be towards obtaining an objective, uniformly constructed variable, particularly to investigate the way sentiment spreads and assess the explanatory capacity of global and local sentiment indices, since differences in variable construction can have considerable impact on the results obtained.