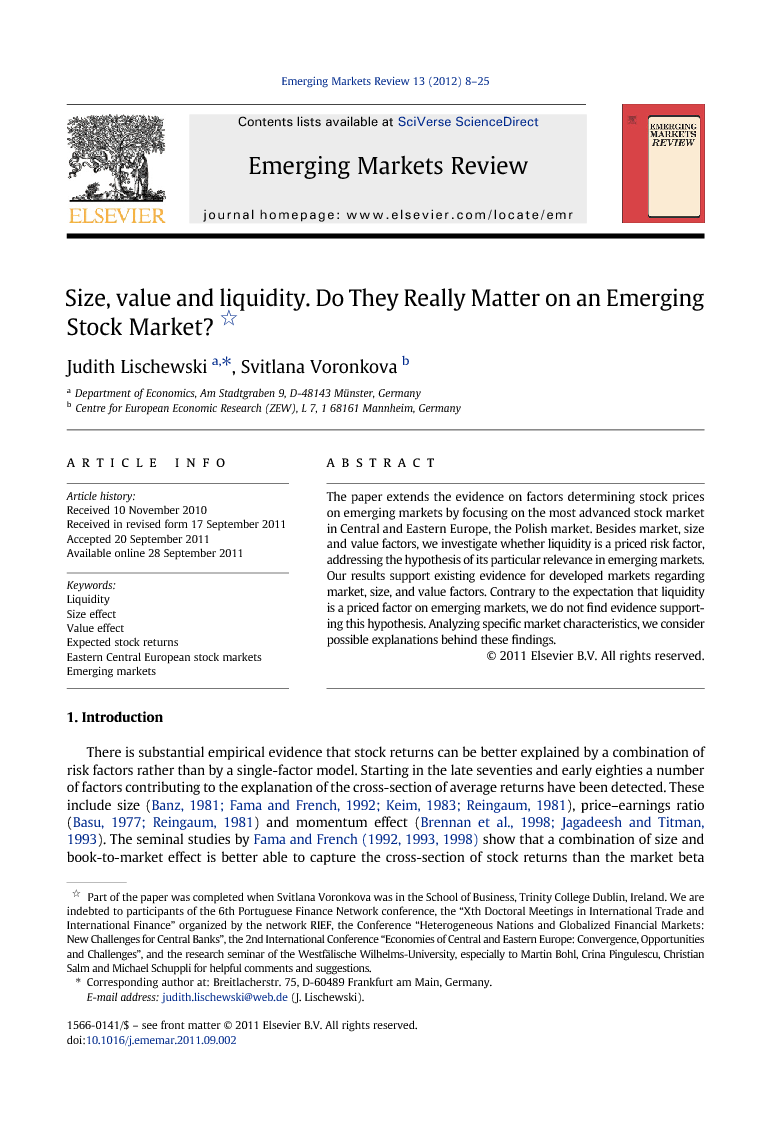 The paper extends the evidence on factors determining stock prices on emerging markets by focusing on the most advanced stock market in Central and Eastern Europe, the Polish market. Besides market, size and value factors, we investigate whether liquidity is a priced risk factor, addressing the hypothesis of its particular relevance in emerging markets. Our results support existing evidence for developed markets regarding market, size, and value factors. Contrary to the expectation that liquidity is a priced factor on emerging markets, we do not find evidence supporting this hypothesis. Analyzing specific market characteristics, we consider possible explanations behind these findings.

The empirical evidence of previous literature suggests that a number of factors may help to explain the pattern of asset returns. This paper extends this evidence by studying the return patterns of the largest and the most developed stock market in the Central and Eastern Europe. Despite the size and significance of the Polish stock market in the region, up to our knowledge, there have been no studies into risk factors affecting its stock returns. The present paper investigates whether the factors that are found to be important for the developed and other emerging markets also play a role for asset pricing in this market. In particular, we investigate the relevance of the market, size, book-to-market and liquidity factors. While the first three factors have been well-established in the empirical finance literature, liquidity as a risk factor has only very recently been studied for few emerging markets. Findings on the influence of liquidity on important emerging markets may potentially have relevant implications for making accurate inferences with regard to asset pricing. This is especially true for liquidity as a risk factor, as it is deemed to be particularly important in the context of emerging markets where the number of securities, number of traders and efficiency of trading mechanisms is likely to be lower than in the developed markets. We use a hand-collected and carefully compiled dataset. This helps us to avoid representation and survivorship biases which are often cited in relation to the price and company data on emerging equity markets. Our results confirm some of the existing evidence for developed markets, while challenge some of the other. We find that small stocks outperform large stocks and value stocks outperform growth stocks. The small value stocks show highest return while large growth stocks show the lowest return in the Polish stock market. We find evidence that the market factor, size, and book-to-market value factors all have explanatory power for the Polish stock returns. However, these three factors fail to fully capture the entire equity premium. The extension of the model by the liquidity factor, while reducing the occurrence of the statistically significant risk-adjusted excess returns, also fails to explain them fully. We therefore conclude that liquidity risk is less relevant for the Polish stock market. We leave the question about the other factors which may improve the explanatory power of the three-factor model for further research.