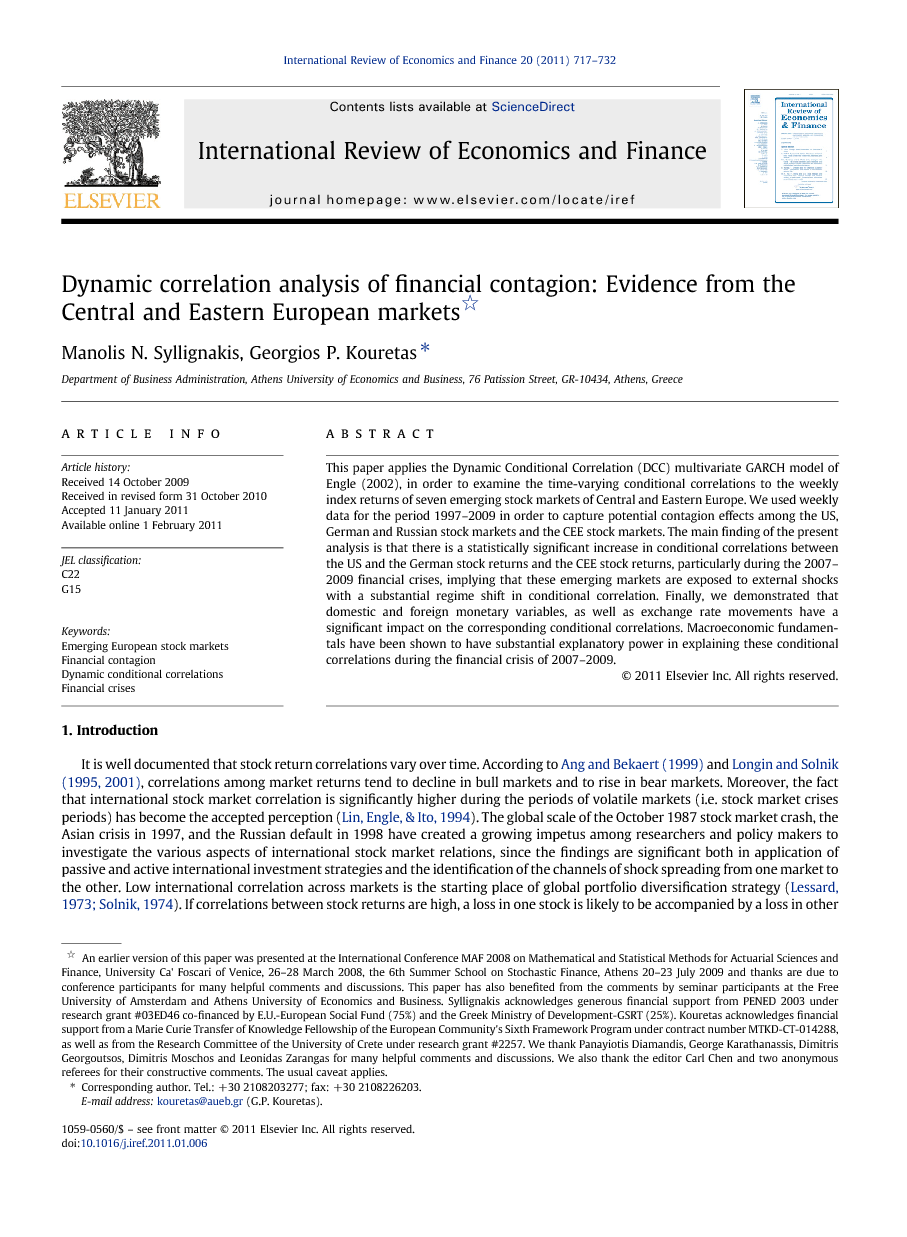 In this paper, we used the multivariate DCC–GARCH model to investigate the existence of short-run interrelationships between the stock market returns of the US, Germany and Russia and those of the Czech Republic, Estonia, Hungary, Poland, Romania, Slovakia and Slovenia, by employing weekly stock-price data for the period October 1997 to February 2009. The estimated conditional correlation coefficients demonstrate significant variation in the conditional correlations throughout the sample and particularly around periods of financial distress like the recent stock market crash (2007–2009). This finding supports the use of the Dynamic Conditional Correlations approach as the appropriate framework to investigate the existence of increased correlation patterns during periods of financial turmoil, as well as of the potential channels of contagion effects. The analysis of the dynamic correlation coefficients provided substantial evidence in favor of contagion effects due to herding behavior in the financial markets of the Central and Eastern European emerging markets, particularly around the 2007–2009 financial turmoil. On the contrary, for the cases of the Asian and Russian crises (1997–1998) and the dot-com bubble, the contagion effect hypothesis cannot be accepted throughout the cross section. The statistically highly significant effect on the conditional correlations during the recent stock market crash may be attributed to the increased participation of foreign investors in the CEE stock markets, as well as to increased financial liberalization, particularly after the accession of the CEE countries to the European Union in 2004. Further evidence in favor of contagion effects during the 2008 stock market crash was provided by the rolling regression analysis of the conditional correlations with the conditional volatility. The results reveal a significant positive βi coefficient, accompanied by an R2 of almost 100% on October 2008, when the volatility of the German market increased dramatically and correlation reached historically high levels. This result also implies that the usefulness of the Central and Eastern European stock markets as a diversification tool has diminished in the recent years. Finally, the rolling stepwise regression analysis of the conditional correlations applied to a set of variables that proxy the real and monetary convergence between the CEE economies and the German economy showed that there were periods like the recent financial turmoil (2007–2009) when the macroeconomic fundamentals played a key role in explaining the stock market correlations, while there were other periods in which the explanatory power of the fundamentals was limited. Specifically, we were able to detect strong evidence of a positive relationship between the monetary convergence and stock returns' correlation, while the impact of the factors that proxy the business cycle and the inflationary environment convergence were also found to be statistically significant but their sign varied substantially across the sample. These findings further suggest that the differences on the impact the 1997 Asian crisis and the 2007–2009 crisis had on the CEE stock markets may also be attributed to the different origin and type of the two crises. The 1997 Asian crisis started in Asia, specifically, in Thailand where the currency market collapsed, while the 2007–2009 global financial crisis started in the US when its sub-prime mortgage market, and subsequently banking markets, collapsed. The recent crisis was expected to be more related to the CEE markets than the earlier Asian crisis. The main findings of the paper are consistent with these different characteristics of the two crises.19