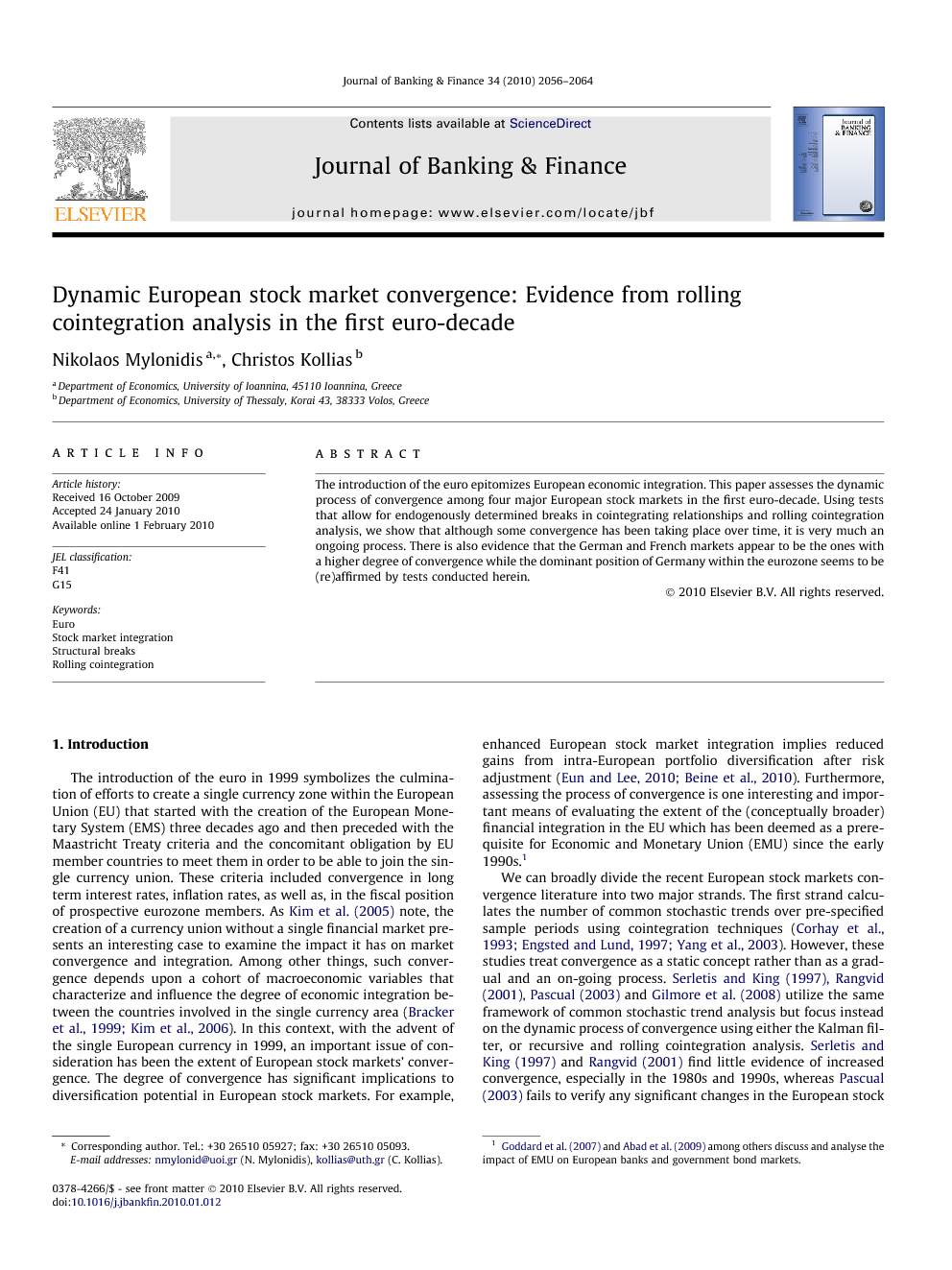 The introduction of the euro epitomizes European economic integration. This paper assesses the dynamic process of convergence among four major European stock markets in the first euro-decade. Using tests that allow for endogenously determined breaks in cointegrating relationships and rolling cointegration analysis, we show that although some convergence has been taking place over time, it is very much an ongoing process. There is also evidence that the German and French markets appear to be the ones with a higher degree of convergence while the dominant position of Germany within the eurozone seems to be (re)affirmed by tests conducted herein.

This study examines the time-varying long-run relationship among four major European stock market indices in the post-euro era. In general, the empirical results suggest that although some convergence has been taking place over time, it is still in the process of being achieved. The preliminary analysis indicates the presence of multiple structural breaks in the cointegrating relationships. To account for these breaks, we employ rolling cointegration techniques. The rolling trace statistics indicate some significant differences in the pattern of convergence throughout the sample period. We conjecture that major international economic, financial and political events and crises are likely to have caused upward- and downward-shifts in the trace statistics. Among the four European stock markets, the German and French markets seem to have experienced higher convergence as evidenced by the faster speed of adjustment to equilibrium coefficients. This probably reflects the increased role the two countries have in the process of European integration. At the same time, the rolling estimates of the weak exogeneity tests indicate Germany’s dominant position in Europe both in terms of its economy, as well as, in terms of its political importance in EU and eurozone affairs. These findings have important implications for both investors and policy makers. For investors, the finding of (weak) convergence implies that intra-European portfolio diversification has become less effective as stock market returns exhibit similar behaviour to internal and external shocks. Furthermore, since stock market prices are somehow interrelated, domestic markets are less immunized to external shocks, especially those originating from Germany. For policy makers, probably the most important implication of our findings is that European stock market convergence is time variant, especially around periods marked by financial turmoil. This evidence suggests that initiatives to further integrate the European stock markets should incorporate (i) enhanced vigilance in assessing the sources of financial uncertainty in the euro area and (ii) coordinated actions between national and community institutions to proactively ensure smooth functioning of the financial system.