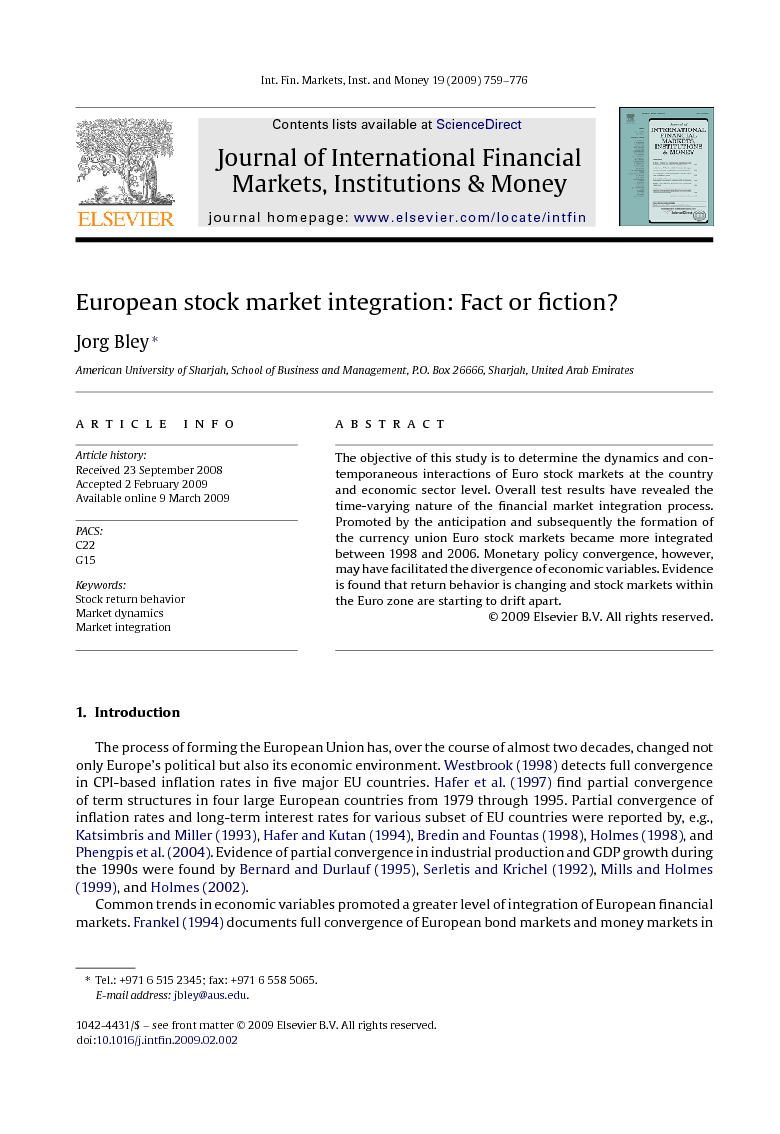 The objective of this study is to determine the dynamics and contemporaneous interactions of Euro stock markets at the country and economic sector level. Overall test results have revealed the time-varying nature of the financial market integration process. Promoted by the anticipation and subsequently the formation of the currency union Euro stock markets became more integrated between 1998 and 2006. Monetary policy convergence, however, may have facilitated the divergence of economic variables. Evidence is found that return behavior is changing and stock markets within the Euro zone are starting to drift apart.

The process of forming the European Union has, over the course of almost two decades, changed not only Europe's political but also its economic environment. Westbrook (1998) detects full convergence in CPI-based inflation rates in five major EU countries. Hafer et al. (1997) find partial convergence of term structures in four large European countries from 1979 through 1995. Partial convergence of inflation rates and long-term interest rates for various subset of EU countries were reported by, e.g., Katsimbris and Miller (1993), Hafer and Kutan (1994), Bredin and Fountas (1998), Holmes (1998), and Phengpis et al. (2004). Evidence of partial convergence in industrial production and GDP growth during the 1990s were found by Bernard and Durlauf (1995), Serletis and Krichel (1992), Mills and Holmes (1999), and Holmes (2002). Common trends in economic variables promoted a greater level of integration of European financial markets. Frankel (1994) documents full convergence of European bond markets and money markets in the mid- to late 1990s and Fratzscher (2002) reports that European stock markets have become highly integrated since 1996. While the removal of legal and non-legal barriers to capital flow within the European Union has led to a higher degree of integration (Bekaert and Harvey, 1995 and Ng, 2000), Longin and Solnik (1995) and Bodart and Reding (1999) have found traces of time variation in the process of integration of European stock markets. The level of integration seems to be the highest during times of economic contractions (Erb et al., 1994 and Ragunathan et al., 1999). Several authors have concluded that the main obstacle to achieving real integration is the existence of exchange rate uncertainty (Dumas and Solnik, 1995, Bodart and Reding, 1999 and Hardouvelis et al., 1999) and divergence in fiscal and monetary policies (Emerson, 1991; de Groof and van Tuijl, 1993; Corsetti and Pesenti, 1999). The drive towards a single European currency was harmonizing monetary and, to a lesser extent, fiscal policies, which promoted the stock market integration in the late 1990s (Fratzscher, 2002). The author's conclusion is in line with Fama and French (1989), Ferson and Harvey (1991), Jaganathan and Wang (1996), and Phengpis et al. (2004) who had already identified this real integration, that is the correlation of business cycles, as the main driver of stock market integration. This paper presents the argument that it was the expectation of monetary policy convergence and the elimination of barriers to capital flow that promoted stock market integration. However, with the introduction of the Euro came the “one size-fits-all” monetary policy approach of the European Central Bank that was ultimately detrimental to economic convergence. Since the introduction of the Euro, economic conditions have become less homogeneous. During 2000–2006, the mean annual GDP per capita growth rate was 2.0% for the Euro zone.1 This economic growth, however, was not evenly distributed among member countries. While Germany and Italy experienced below average GDP growth rates of 1.3%, Ireland, Greece, and Spain enjoyed mean annual growth rates of 6.0, 4.4, and 3.6%, respectively.2 Private consumption expenditures in the Euro zone grew by 4.2% annually over the last 5 years. While the highest growth rates are, again, found in Ireland (8.5%), Spain (6.3%), and Finland (5.1%). Italy (4.1%) and France (3.8%) outgrew Germany (2.1%). Since 1998, capital spending fell by 6.3% in Germany while in Spain it rose by 26.3%. Unemployment statistics for 2006 depict a range of 3.6% for the Netherlands followed by Ireland (4.3%), and Austria (4.6%) to 9.0% for Greece followed by Spain and France (8.6%). Germany, as the largest Euro zone economy, has an unemployment rate of 7.9% down from 9.3% in 2005. Germany, however, as well as Austria enjoys a solid growth in exports growth while Italy's and France's export growth has been quite weak.3 One possible explanation for the divergence in exports would be the difference in inflation rates across Euro member states. The combination of inflation rate divergence and fixed nominal exchange rates, gave rise to differences in real exchange rates, promoting, for example, Germany's exports to the detriment of other Euro countries.4 The divergence in nominal economic variables is in part the direct result of increasing monetary policy convergence and may lead to heightened economic uncertainty in financial markets (Kim et al., 2005).5 For example, while the single interest rate is too high for the German economy and stifles economic growth, it is too low to curb inflation in faster growing countries such as Ireland and Spain. Several authors (e.g., Chen and Jordan, 1993, King et al., 1994 and Dickinson, 2000) have suggested that stock markets tend to focus on nominal economic variables such as profits and GDP growth rates. Further integration of product and factor markets is needed to reinforce convergence of real sectors. In the long-run the convergence process of real, as opposed to nominal, economic variables is the important contributor to stock market returns (Phengpis et al., 2004). Eventually, the stock markets will likely be impacted by increasing business cycle disintegration.6 The main contribution of this paper is the discovery of traces of an already residing level of stock market cointegration among European stock markets by using country and economic sector index data until December 2006. These traces could not have been picked up in the comprehensive literature survey on international stock market integration by Kearney and Lucey (2004) nor by the authors of even the most recent papers on EU stock market integration (e.g., Phylaktis and Xia, 2006, Antoniou et al., 2007 and Syriopoulos, 2007) as they do not include stock market data beyond 2003. The detection of residing levels of cointegration has profound implications on the diversification benefits of European portfolios and questions the benefits of the bottom-up approach to investing that has gained popularity with the introduction of the Euro.7

The objective of this study is to determine the dynamics and contemporaneous interactions of Euro stock markets at the country and economic sector level. Overall test results have revealed the time-varying nature of the financial market integration process. The implementation of the Maastricht criteria may have led to a period of real convergence of European economies. The resulting increased synchronization of business cycles was reflected in a higher level of cross-country return correlations as investors expected a greater alignment of real corporate earnings. Promoted by the anticipation and subsequently the formation of the currency union, Euro markets became more integrated between 1998 and 2003. It appears, however, that monetary policy convergence has facilitated the divergence of economic variables. As a result stock markets’ return behavior is changing and stock markets are starting to drift apart. This may just be a temporary phenomenon, as periods of declining market integration have previously been identified (Fratzscher, 2002), but an ever increasing level of financial market integration in the Euro zone should not be taken for granted. Until more conclusive evidence is found, the presented results suggest the diversification benefits of the bottom-up approach to investing, that has gained vast popularity in the Euro zone with the introduction of the single currency, be questioned.