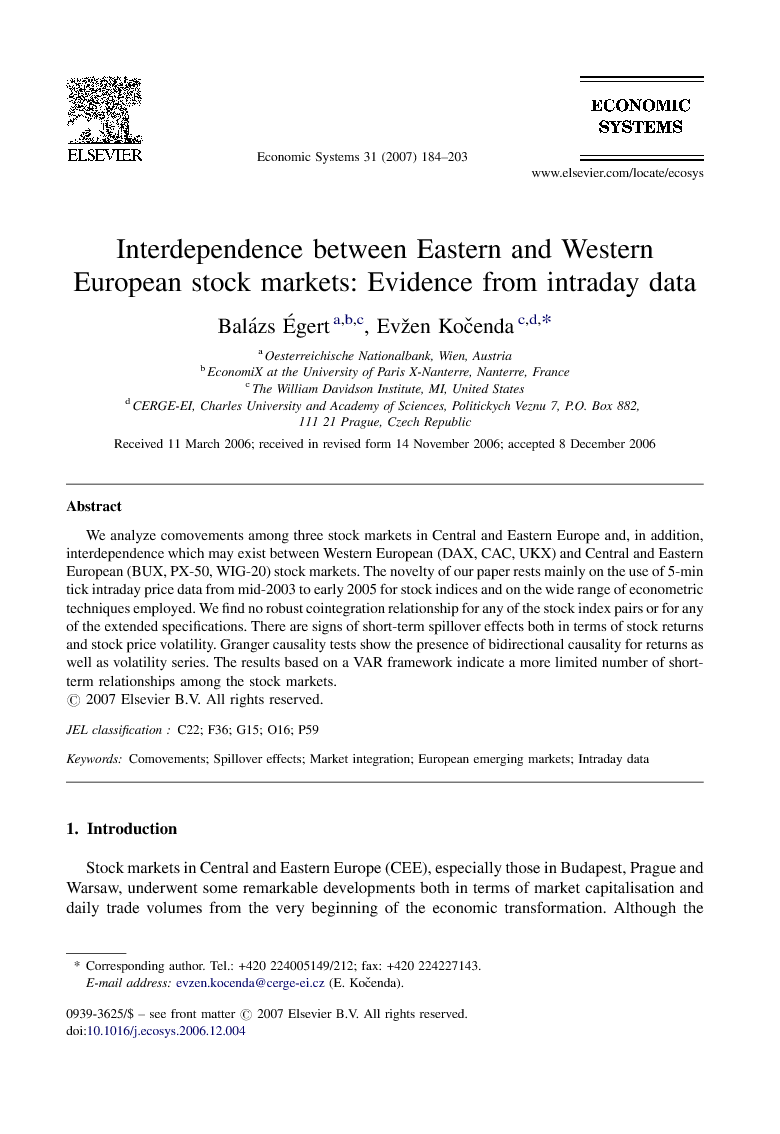 We analyze comovements among three stock markets in Central and Eastern Europe and, in addition, interdependence which may exist between Western European (DAX, CAC, UKX) and Central and Eastern European (BUX, PX-50, WIG-20) stock markets. The novelty of our paper rests mainly on the use of 5-min tick intraday price data from mid-2003 to early 2005 for stock indices and on the wide range of econometric techniques employed. We find no robust cointegration relationship for any of the stock index pairs or for any of the extended specifications. There are signs of short-term spillover effects both in terms of stock returns and stock price volatility. Granger causality tests show the presence of bidirectional causality for returns as well as volatility series. The results based on a VAR framework indicate a more limited number of short-term relationships among the stock markets.

Stock markets in Central and Eastern Europe (CEE), especially those in Budapest, Prague and Warsaw, underwent some remarkable developments both in terms of market capitalisation and daily trade volumes from the very beginning of the economic transformation. Although the financial system of these countries largely remains bank-dominated, the stock exchanges appear to be well integrated with world financial markets following the lifting of restrictions on portfolio capital movements. However, given that these markets are small compared to the stock exchanges of the largest OECD countries, they may be sensitive to shifts in regional and worldwide portfolio adjustments of large investment funds and other market participants, even though the amount of capital involved in such moves are not necessarily very large by global standards. Consequently, these markets may be more volatile than well-established stock markets. The literature distinguishes cross-market comovements during calm periods as opposed to periods before and after a crisis. Interdependence defines how strong the interlinkage between two markets is during normal times. By contrast, there is contagion if the interlinkage becomes stronger in the aftermath of a crisis than prior to a crisis (Forbes and Rigobon, 2002). An increasing number of papers investigate the short- and long-term linkages among the CEE stock exchanges both in terms of stock returns and stock market volatility. Regarding long-run relationships, Gilmore and McManus, 2002 and Gilmore and McManus, 2003 cannot establish any long-term relationship among the three CEE markets (Budapest, Prague and Warsaw; the “CEE-3”) and the US and German stock markets, whereas Voronkova (2004) shows the presence of long-run links among the Central European markets and between CEE and their mature counterparts once structural changes in the long-run links are properly accounted for. In a similar vein, Syriopoulos (2004) finds that CEE markets tend to display stronger linkages with their mature counterparts than with their neighbours. Regarding short-term linkages, Bohl and Henke (2003) show for daily stock market volatility for 20 Polish stocks that volatility persistence tends to disappear when trading volume is included in the conditional variance equation, a result that is in agreement with the findings of studies on developed stock markets. Scheicher (2001) finds evidence of limited interaction between the CEE-3 and major markets: in returns, both regional and global shocks are identified, but innovations to volatility chiefly exhibit a regional character. Tse et al. (2003) show that there is no volatility spillover between the US and the Polish markets and that short-term spillover goes from the US to the Polish stock market but not the other way around. Serwa and Bohl (2005) is the only study which analyzes changes in interdependence, i.e. whether there is contagion, for the CEE countries and finds that CEE stock markets are not more prone to contagion than more developed stock markets. The evidence in the literature is mostly based on data with daily or even lower frequencies, since historical intraday series from the CEE stock markets are usually unavailable. Yet developments in volatility and contagion effects that materialize during the trading day represent a finer picture that often cannot be extracted from daily observations. Another big advantage of using intraday data is that the estimates are more robust to structural breaks (Terzi, 2003) given the relatively short time horizon (2 years) as compared to studies employing daily data (up to 10 years). To our knowledge, the only paper that uses intraday stock market data for CEE stock markets is Černý and Koblas (2005). The authors use intraday data for an 8-month period from June 2003 to February 2004 at different frequencies and show the absence of any long-run (Engle or Granger type) relationship between Warsaw and Prague on the one hand and the DAX index on the other hand. The Granger causality tests reveal only a one-directional link running from the DAX to the two CEE stock markets. Against the general lack of empirical evidence for intraday stock market interlinkages between Eastern and Western European stock markets, our paper in fact aims to fill this gap in the literature by investigating the links and possible spillover effects for stock returns and stock volatilities among markets in Budapest, Prague and Warsaw from June 2003 to February 2005. We also study their interactions with selected major markets in the EU (Frankfurt, London and Paris) on the basis of intraday data recorded in 5-min intervals. Given that this period does not cover any major crisis, we focus on interdependence rather than on contagion. We do not find any robust cointegration relationship for any of the stock index pairs but we identify short-term spillover effects both in terms of stock returns and stock price volatility. The outline of the paper is as follows: Section 2 deals with data issues. Section 3 focuses on the testing procedure. Section 4 presents the estimation results. Finally, Section 5 provides some concluding remarks.

In this paper, we analyzed possible interdependences among three stock markets in Central and Eastern Europe and, in addition, interconnections which may exist between Western European stock markets on the one hand (DAX, CAC, UKX) and CEE stock markets (BUX, PX-50, WIG-20) on the other. The analysis was performed on a sample over which no major crisis occurred. The novelty of our paper rests mainly on the use of the 5-minute tick intraday data for stock indices and on the wide range of econometric techniques employed. Our estimation results indicate that for a common daily window adjusted for the observed U-shaped pattern running from mid-2003 to early 2005, no robust cointegration relationship could be established for any of the stock index pairs or for any of the extended specifications. Apart from the lack of any stable long-term relation between the stock market indices under study, there are signs of short-term spillover effects both in terms of stock returns and stock price volatility. Granger causality tests show the presence of bidirectional causality for the returns as well as volatility series. However, the overwhelming evidence for bidirectional causality is partly mitigated by the results based on a VAR framework which includes both stock returns and stock market volatility. The results from the VAR shed light on a more limited number of short-term relationships between the stock markets. In general, we find spillover effects from returns to returns among the CEE markets, among the Western markets and from Western Europe to CEE. However, no spillover seems to occur from the East to the West. Surprisingly, we are able to identify volatility spillover effects among the CEE markets, among the Western markets and from Western markets to CEE markets, but also from BUX and WIG-20 to DAX and UKX, respectively. This casts some doubt on the well-established position that only dominant markets can influence volatility on other markets. Our findings also indicate a peculiar pattern in CEE: the Prague and Warsaw stock exchanges seem to interact both in terms of returns and volatility with the Budapest stock exchange, but not with each other. As a result, short-term spillovers from Prague to Warsaw and vice versa are mostly likely to transit via Budapest. To conclude, our research bears two implications. First, the finding that smaller markets may impact dominant markets shows that the CEE markets may be considered by hedge funds and institutional investors as a separate “asset class” as compared to stocks in Western Europe. Second, the finding of only short-term but no robust long-term relationships between CEE and Western European stock markets – already shown in earlier research – may have positive importance for international portfolio diversification into CEE.