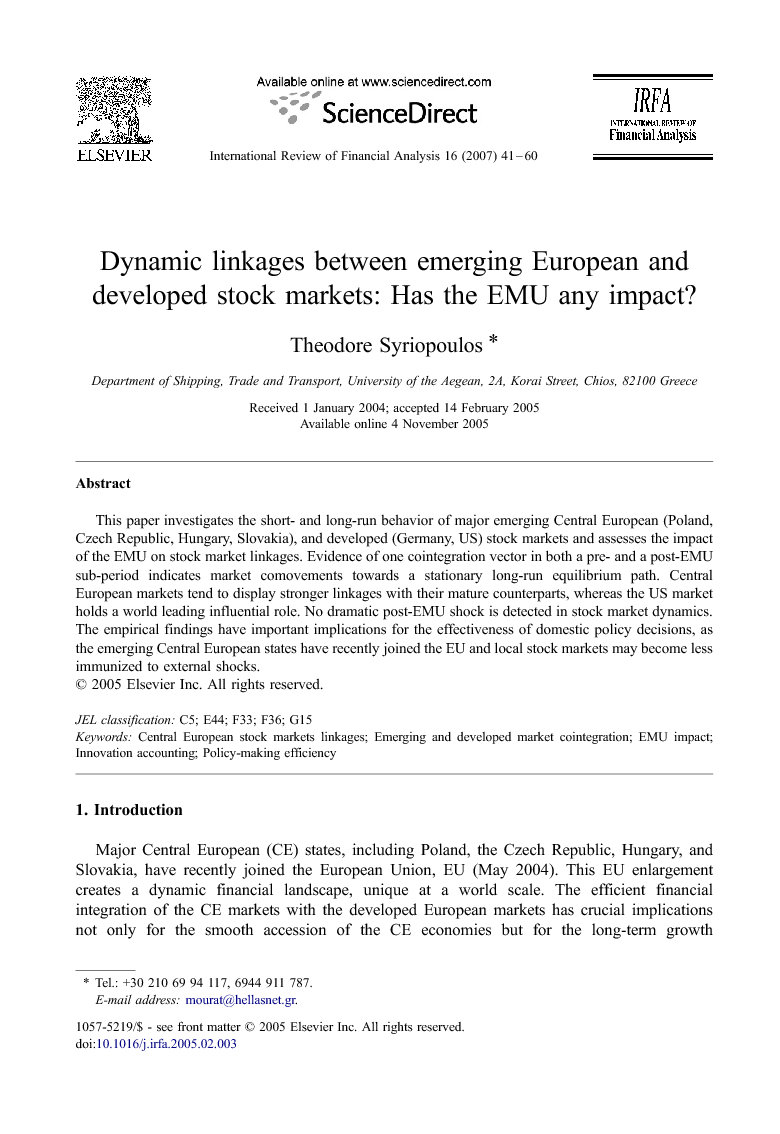 This paper investigates the short- and long-run behavior of major emerging Central European (Poland, Czech Republic, Hungary, Slovakia), and developed (Germany, US) stock markets and assesses the impact of the EMU on stock market linkages. Evidence of one cointegration vector in both a pre- and a post-EMU sub-period indicates market comovements towards a stationary long-run equilibrium path. Central European markets tend to display stronger linkages with their mature counterparts, whereas the US market holds a world leading influential role. No dramatic post-EMU shock is detected in stock market dynamics. The empirical findings have important implications for the effectiveness of domestic policy decisions, as the emerging Central European states have recently joined the EU and local stock markets may become less immunized to external shocks.

The short- and long-run linkages between major emerging Central European markets (Poland, Czech Republic, Hungary, Slovakia), and developed markets (Germany, US) have been investigated in depth. As the CE states have joined the EU recently, the examination of dynamic interdependencies with major international stock markets remains an important issue. Emphasis has been placed on the assessment of possible implications for the CE stock markets following the establishment of the EMU. The data generating process provides preliminary indications that some convergence between the CE and major developed financial markets may be taking place over time. The tests for cointegration using the Johansen procedure support the presence of one cointegrating vector between the CE, the US, and the German stock markets in both the pre-EMU and post-EMU sample periods, indicating a stationary long-run relationship. Granger ‘causal’ relationships and lead–lag effects have also been identified between the CE and the developed stock markets. The CE stock markets tend to display stronger linkages with their mature counterparts rather than with the other CE neighbors. This may be related to the short active life of the CE stock markets since their reopening in the early 1990s, and the absence of substantial market depth in terms of capitalization, turnover, and number of traded securities. There is, however, growing inflow of foreign portfolio investments and international investors increase trading activity in the CE stock markets. The US market holds a leading role, as it can induce strong movements in the CE markets but is not influenced by them. The Polish, Hungarian, and Czech stock markets appear more sensitive to shocks from the mature markets. The Slovakian stock market is found to exhibit a more autonomous behavior relative to its CE peers. Both domestic and external factors affect the CE stock markets, shaping their long-run equilibrium. Although no dramatic impact due to the EMU has been detected, the implications for the CE stock market comovements and linkages cannot be definitely assessed. Transition appears to be smooth, and this may be related to the fact that macroeconomic policies have already been adjusted to support convergence with the EU, and meet certain prerequisite economic criteria. The integration of the CE production and trade structures is already well advanced, and is anticipated to continue at a gradual pace (Havlik, 2003). However, the time span of the two sample sub-periods examined here may not be long enough to adequately cover a business (stock market) cycle. To conclude, the Central European markets follow a common path of growth, and become gradually more integrated with the international developed markets. These linkages are anticipated to strengthen as the CE economies have joined the EU. The presence of cointegrating relationships has important implications for the effectiveness of the domestic macroeconomic policies pursued, as domestic markets become less immunized to external shocks. In the EMU framework, monetary policies in the CE markets are to become more coordinated, which may bring about similar domestic economic conditions in the medium term. The dynamics of stock market comovements lead to converge towards a common long-run equilibrium path. This can affect asset valuations, and equity market risk limiting portfolio diversification opportunities. Further research in the CE stock market behavior following their actual participation into the EMU could enrich the present findings. The implementation of complementary quantitative tools, such as dynamic volatility GARCH models, and Markov-type regime switching non-linear models can bring fresh insight into these issues.