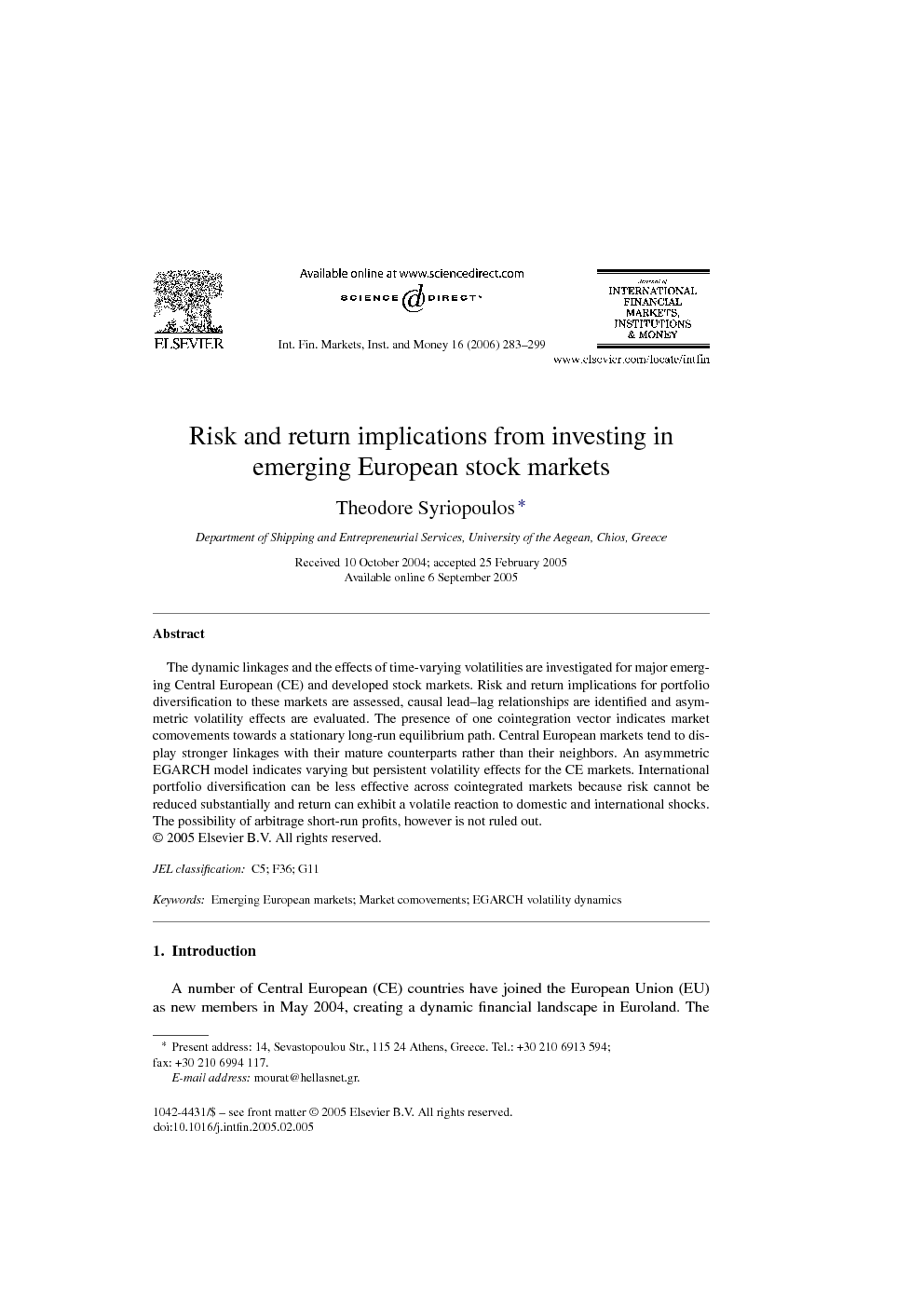 The dynamic linkages and the effects of time-varying volatilities are investigated for major emerging Central European (CE) and developed stock markets. Risk and return implications for portfolio diversification to these markets are assessed, causal lead–lag relationships are identified and asymmetric volatility effects are evaluated. The presence of one cointegration vector indicates market comovements towards a stationary long-run equilibrium path. Central European markets tend to display stronger linkages with their mature counterparts rather than their neighbors. An asymmetric EGARCH model indicates varying but persistent volatility effects for the CE markets. International portfolio diversification can be less effective across cointegrated markets because risk cannot be reduced substantially and return can exhibit a volatile reaction to domestic and international shocks. The possibility of arbitrage short-run profits, however is not ruled out.

A number of Central European (CE) countries have joined the European Union (EU) as new members in May 2004, creating a dynamic financial landscape in Euroland. The efficient financial integration of these markets with the developed European markets has important implications for the smooth accession of the CE economies but also for the long-term growth prospects of the enlarged EU. Despite high growth rates seen in the emerging CE stock markets, research remains surprisingly limited and the empirical findings appear sometimes ambiguous and contradictory. As further insight would be useful, this study attempts to fill some of the gaps in the topic and contribute a range of innovative conclusions. Major emerging CE stock markets, namely Poland, Czech Republic, Hungary and Slovakia, are examined and compared to representative mature markets, Germany and the US. Different stock market patterns are analyzed, potential dynamic linkages and interdependencies are assessed, cointegrating vectors and lead–lag relationships are identified, asymmetric time-varying volatility effects are detected and the implications of risk and return for portfolio diversification are evaluated. The presence of any cointegrating vector in the emerging CE stock markets would justify possible comovements between the region and developed markets. A six-dimensional vector error correction model (VECM) is employed to test for the temporal causal dynamics in the Granger framework and to gain insight into lead–lag relationships of the markets under study. Furthermore, an asymmetric exponential generalized autoregressive conditional heteroscedasticity (EGARCH) model explores the implications of potential asymmetric time-varying volatility effects for asset allocation to the CE markets. Past literature in stock market interrelations has concentrated mainly on developed markets neglecting emerging stock markets but the conclusions have not always been consistent (e.g. Lai et al., 1993, Fratzscher, 2001, Chen et al., 2002, Bessler and Yang, 2003, Chaudhuri and Wu, 2003 and Yang et al., 2003). The impact of stock market integration and volatility effects has considerable implications for international investors and active asset management in the CE stock markets. Although international portfolio diversification can lead to efficient asset allocation and reduce risk, assets associated with similar levels of risk are anticipated to have similar levels of return in integrated markets. If the CE stock markets share common trends, no particular gains should be anticipated from diversification because the presence of common factors limits the amount of independent variation. Cointegrated markets exhibit comovements and a stable long-run behavior, although potential short-run profits should not be ruled out. In case that the CE stock markets are not found interrelated, profitable opportunities from international portfolio diversification can be exploited, leading to superior portfolio returns for long-term investors. However, it is also important to assess the pattern of volatility dynamics, as highly volatile markets increase the equity risk premium and have an adverse impact on efficient portfolio diversification. The rest of the paper is organized as follows. Section 2 discusses briefly key characteristics of the major CE stock markets under study. Section 3 presents the empirical methodology and findings. The final section concludes.

The risk and return implications from investing in emerging Central European stock markets have been studied in depth. Emphasis has been placed on the short- and long-run linkages of major CE and developed stock markets (Poland, Czech Republic, Hungary, Slovakia, Germany and the US), employing cointegration methodology. The time-varying volatility behavior of these markets has also been investigated, incorporating asymmetric EGARCH models. The CE states have recently joined the EU and examination of these issues remains important and timely. The empirical findings enrich the thin body of literature on the emerging CE stock markets and have direct implications for the assessment of risk and return in portfolio diversified to these markets. The evidence supports the presence of one cointegration vector and indicates a stationary long-run relationship. The relevant VEC model showed some Granger causal effects and lead–lag relationships between emerging and mature stock markets. Short-run deviations from equilibrium are found to exert a feedback effect on the CE markets, resulting to reversion towards their long-run path. Although both domestic and external forces have an impact on that, this process appears to be slow. The individual CE markets tend to display stronger linkages with their mature counterparts rather than the other CE neighbors. This may be related to the short active life of the CE stock markets and the absence of substantial market depth, in terms of capitalization, turnover and listed companies. Direct foreign investment inflows and asset allocation by international portfolios towards the CE markets have also increased recently. The US market holds a leading influential role, as it can induce strong movements in the CE markets but is not influenced by them, whereas a feedback impact is seen between the US and German markets. The Polish, Czech and Hungarian stock markets are more sensitive to shocks transmitted from the mature markets and short-term causal linkages are found between these CE markets. In case of short-run departures from the long-run path, it is mainly responses from the Polish and Czech stock markets that adjust in order to clear the disequilibrium. The Slovakian stock market remains small in terms of capitalization and turnover and exhibits an autonomous behavior relative to its CE peers and the mature counterparts. The EGARH model was found to be a statistically satisfactory representation to study the implications of volatility effects for CE stock market returns. The empirical findings support persistent volatility effects, since once volatility increases it can remain high over several periods in the future. However, the impact of volatility on the CE stock market returns is not uniform, and Poland exhibits relatively lower reactions. This may indicate that sectoral and/or market-specific fundamentals can also be important when investors decide on asset allocation to the CE markets. Portfolio diversification to the CE stock markets may not present an attractive low risk investment opportunity, as CE market returns can exhibit persistent volatility over time. The (negative) asymmetric (leverage) effects are found to be significant mainly for the developed stock markets, indicating that a negative shock is anticipated to potentially cause volatility to rise more than a positive shock of the same magnitude. The Central European markets follow a common path of adjustment and growth and become gradually more integrated with the international developed markets. These linkages are anticipated to strengthen in the medium term, especially following participation in the European Monetary Union (EMU). Evidence indicates that stock market cointegration has strengthened in the countries that have adopted the euro, despite volatility effects (e.g. Fratzscher, 2001). Major driving forces for that have been monetary policy convergence and reduction of exchange rate risk. The presence of cointegrating relationships has important implications for active portfolio management. In the short-run, the CE stock markets may offer opportunities for short-run arbitrage profits. In the long-run however market comovements imply that the potential for attaining superior portfolio returns may be limited. International portfolio diversification is less effective across the cointegrated markets because the investment risk cannot be reduced and portfolio returns can exhibit a volatile behavior to internal and external shocks. This outcome was reinforced by the findings that the risk level for assets allocated to the CE markets appears relatively high, as persistent volatilities may adversely affect investment returns. Further research in the CE stock markets following their accession in the EU could enrich the present findings.