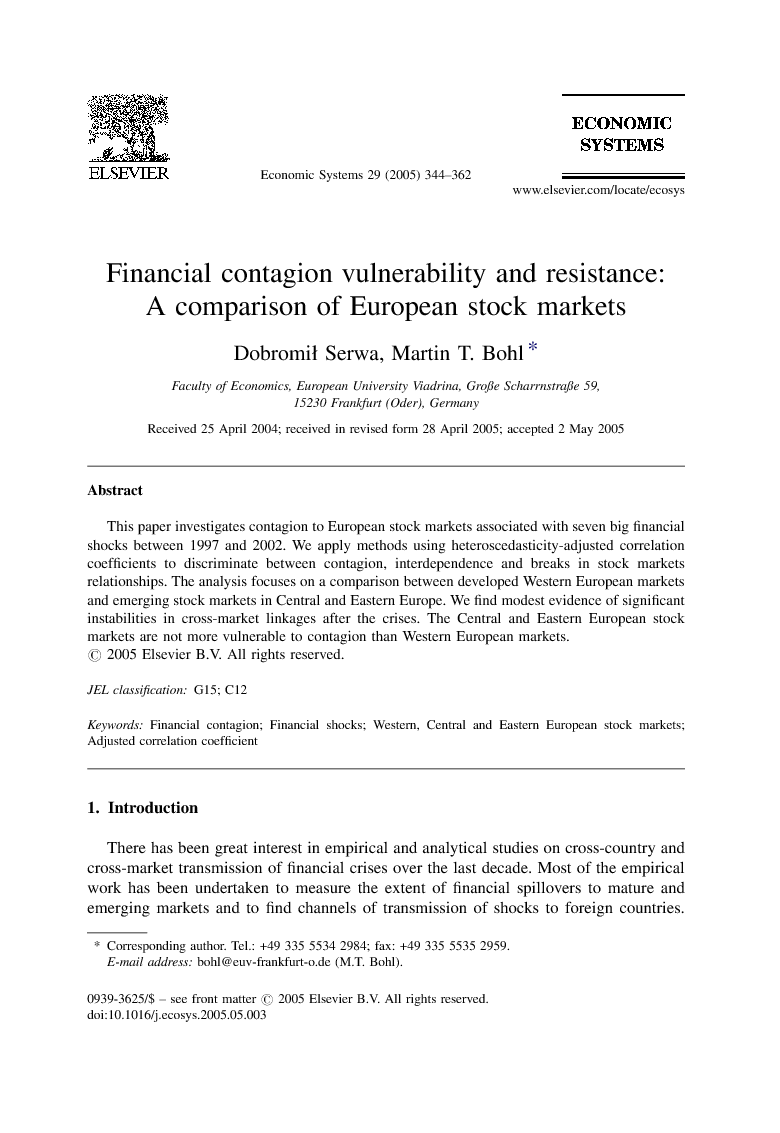 There has been great interest in empirical and analytical studies on cross-country and cross-market transmission of financial crises over the last decade. Most of the empirical work has been undertaken to measure the extent of financial spillovers to mature and emerging markets and to find channels of transmission of shocks to foreign countries. Earlier studies have often focused on contagion to emerging stock markets in South America and Asia due to the crises in the U.S. in 1987, Mexico in 1994, East Asia in 1997 and Russia in 1998.1 Recently, the discussion regarding the enlargement of the European Union (EU) shifted attention to transition countries in Central and Eastern Europe (CEE). However, until now very few empirical studies have concentrated on contagion to CEE markets. Darvas and Szapáry (2000) provide evidence that spillovers from the Russian crisis to CEE were due to shifts in market sentiments and Krzak (1998) argues that the CEE countries have been hit by the Russian crash most heavily through trade rather than through any financial linkages. Gelos and Sahay (2001) outline that the behavior of the emerging CEE markets after the Russian crisis was similar to that of their counterparts in Asia and Latin America during the Asian crisis. Furthermore, they observe increasing correlations across CEE stock markets during the 1994–1999 period. Fries et al. (1999) find that CEE stock markets were generally not as vulnerable to financial contagion during the Asian and Russian crashes as the less developed stock markets from the former Soviet Union. Contagion has been commonly defined as a transmission of shocks from a crisis-country to other countries, which can be observed through co-movements of different financial indices on multiple markets or rising probabilities of default. In this paper, we apply the definition put forward by Forbes and Rigobon (2002) and distinguish between common shocks and contagion.2 Accordingly, contagion requires a change in the structure of stock market linkages. The increase in cross-market linkages during the crisis must be significant to be called contagion, not just interdependence. Contagion is then an excessive transmission of shocks from one crisis stock market to others, beyond any idiosyncratic disturbances and fundamental links among them. Fundamental financial links constitute interdependence. Many empirical methods measuring contagion are based on cross-market correlation coefficient estimates.3Forbes and Rigobon (2002) demonstrate that the rise in correlation does not necessarily imply contagion as defined above. The authors propose a test to distinguish between contagion and co-movement of stock index returns driven by bilateral linkages. Their most striking empirical result from using this procedure is that in the majority of countries one cannot observe contagion during the 1987 U.S. crash, the 1994 Mexican collapse and the 1997 Asian crisis. Gelos and Sahay (2001) also apply a simplified version of this methodology and find no contagion from the Czech Republic, Asia and Russia to CEE stock markets. The method is attractive because it does not assume any specific structure of financial spillovers and allows for a straightforward interpretation of empirical results on cross-market interdependence. Furthermore, some recent testing methodologies extend or are based on the Forbes-Rigobon approach (e.g., Corsetti et al., in press, Bekaert et al., 2005 and Rigobon, 2003).4 Although some new definitions and approaches to test contagion have appeared in the literature (for example, Chan-Lau et al., 2004 and Bae et al., 2003), we concentrate on a correlation-based analysis. As noted by Billio and Pelizzon (2003) and Forbes and Rigobon (2002), this concept suits better than other approaches the issues of international diversification, the role of international institutions and bail-out funds, as well as propagation mechanisms. We utilize the methodologies introduced by Forbes and Rigobon (2002) and Corsetti et al. (in press) and extend their empirical investigation in three directions. First, a different timeframe to explore new crises is used. To our best knowledge, no investigation has focused on spillover effects of new financial crashes to transition countries in CEE. Studying these crises provides new evidence on financial spillovers to emerging stock markets. Second, it is of considerable interest to investors and financial market regulators to examine how vulnerable the European stock markets are to different financial shocks. Therefore, in contrast to most previous studies related to contagion, we provide additional evidence on breaks in linkages between crisis and non-crisis capital markets (Billio and Pelizzon, 2003). Third, our investigation focuses on a comparison between emerging CEE and mature Western European stock markets. The process of integration between the fast developing and well-developed markets in Europe is an example of successful financial liberalization in terms of macroeconomic and institutional fundamentals. Thus, the emerging stock markets appear as an interesting option for diversification of international capital portfolios (Chen et al., 2002, Bekaert and Harvey, 2002 and Bekaert and Harvey, 2003). Our empirical results offer new evidence of whether emerging stock markets in Europe are more vulnerable to financial crises than well-developed European markets and which recent crises were most contagious. In the next section we describe the methods applied to investigate the existence of contagion following Forbes and Rigobon (2002) and Corsetti et al. (in press). In Section 3 we present the data and a method to identify the crises. Section 4 contains our empirical results and Section 5 concludes.

Forbes and Rigobon (2002) showed that higher stock return volatility on a crisis market induces higher correlation between this market and other non-crisis markets even when there is no shift in fundamental relationships between any of them (Ronn, 1998, Boyer et al., 1999 and Loretan and English, 2000). They call such behavior of international stock market returns “interdependence”. In contrast, “contagion” is caused by a significant change in fundamental linkages between the crisis market and non-crisis markets. We utilize the methodologies introduced by Forbes and Rigobon (2002) and Corsetti et al. (in press), as well as an extension of the Corsetti–Pericoli–Sbracia approach to determine whether several financial shocks have any impact on linkages between crisis markets and European stock markets. We focus our investigation on a comparison between the behavior of Western and CEE stock markets during the period prior to the entrance of the first CEE countries to the EU. Crises in East Asia (1997), Russia (1998), Brazil (1999), Turkey (2000), Argentina (2001) and the U.S. (2001, 2002) are analyzed. They originate from macroeconomic fundamentals as well as from political affairs (e.g., terrorist acts). Our main conclusion is that contagion to CEE stock markets was not more frequent than to Western European stock markets. Depending on the model specification, contagion occurred hardly ever or not frequently during the investigated crises and it is rather interdependence than contagion that characterizes co-movements between the crisis and non-crisis stock markets. This result is important for investors willing to allocate their financial capital to emerging markets in Europe. During the analyzed period the CEE stock markets appeared to be quite robust against different external shocks. One explanation of this result could be poor integration of CEE stock markets with world capital markets. Measures of integration like the rate of volatility on the local market explained by U.S. or world market volatility (Baele, in press), indicate that Portugal, Greece and Ireland were not notably more integrated with the world stock market, but the other Western European markets were. In the analyzed period, CEE emerging stock markets did not always react in the same manner to important financial shocks as more developed markets in Western Europe. However, the direction of change in heteroscedasticity-adjusted correlation coefficients between crisis and non-crisis markets is common for both groups of countries. In this sense, the behavior of CEE stock markets had a regional character. The examples of Russia and Argentina show that crises in some emerging capital markets may have an opposite effect on other developing countries. The main reason for the lack of financial contagion between these countries might be the limited importance of the crisis markets. The crises on financial markets in the U.S. and Hong Kong had the most significant impact on the non-crisis European stock markets. In addition, we investigate breaks in relationships between crisis and non-crisis capital markets during turmoil periods. The results for European stock markets show that cases of breaks in linkages are usually as frequent as cases of contagion. This evidence may suggest that some stock markets are independent of certain crises or even benefit from crises elsewhere. The explanation of this phenomenon could be the flow of capital from the crisis market to the non-crisis market and, therefore, further studies in this direction are certainly needed.