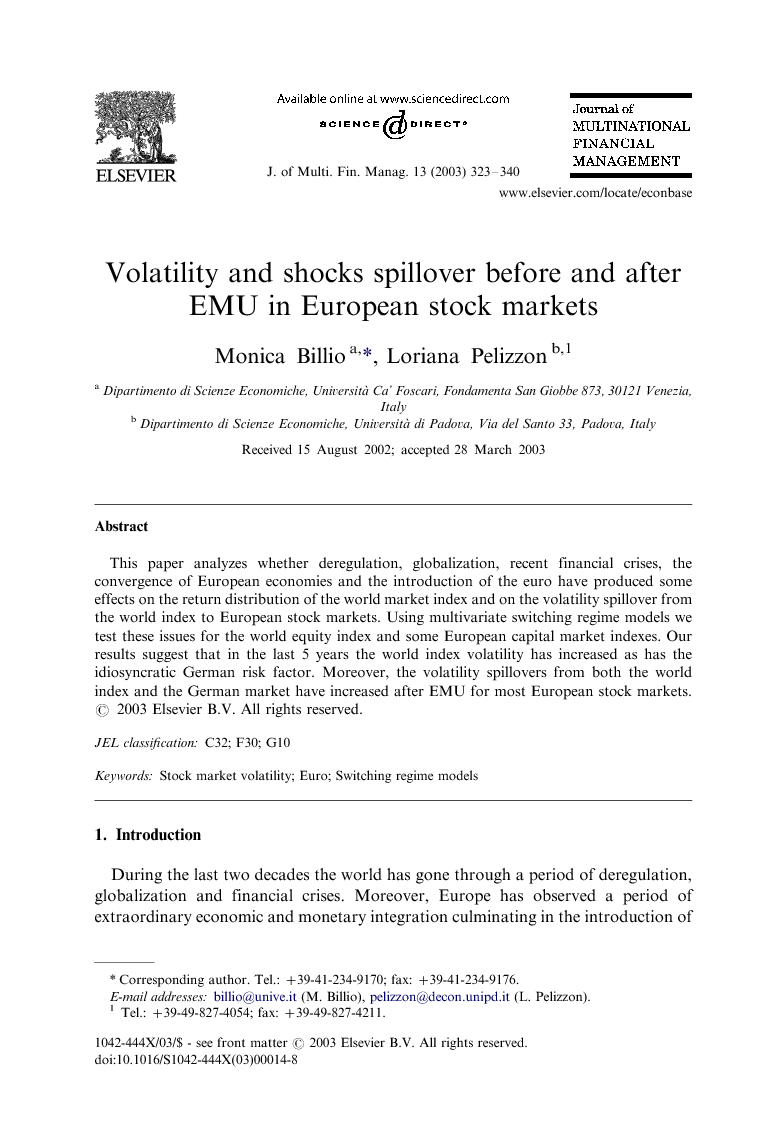 This paper analyzes whether deregulation, globalization, recent financial crises, the convergence of European economies and the introduction of the euro have produced some effects on the return distribution of the world market index and on the volatility spillover from the world index to European stock markets. Using multivariate switching regime models we test these issues for the world equity index and some European capital market indexes. Our results suggest that in the last 5 years the world index volatility has increased as has the idiosyncratic German risk factor. Moreover, the volatility spillovers from both the world index and the German market have increased after EMU for most European stock markets.

During the last two decades the world has gone through a period of deregulation, globalization and financial crises. Moreover, Europe has observed a period of extraordinary economic and monetary integration culminating in the introduction of the euro in January 1999. In addition, significant progress has been made in strengthening and deepening the various European capital markets. The main objective of this study is to shed some light on whether recent financial crises and the efforts for a greater economic, monetary and financial integration have fundamentally altered the sources and intensity of shock spillover to the individual European stock markets in terms of the links (i) with the rest of the world and (ii) between one another. Concerning the first issue, we would like to analyze whether the EMU has been associated with: (i) a different link with the rest of the world, and (ii) an overall change in the stochastic volatility process of the market. Concerning the second issue, we would like to analyze whether the convergence of European economies and the EMU have been associated with: (i) a convergence of European stock returns, and (ii) a change in the stochastic volatility process of stock returns. A good understanding of the origins and transmission intensity of shocks is necessary for many financial decisions including optimal asset allocation, the construction of global hedging strategies, as well as the development of various regulatory requirements, such as capital requirements or capital controls. In the rest of the paper we refer to the sources of financial integration only in terms of euro introduction. However, since we are unable to perform such case study without considering also the implication of globalization, deregulation and financial crises, our analysis implicitly considers all these effects. The implications of the EMU on the variances and covariances of European capital market excess returns and with the rest of the world could be studied with standard (linear) econometric methods. Nevertheless, it is a well-established fact that financial volatility is a stochastic process with a non-negligible degree of persistence. To understand the implications of the EMU on volatility spillover more knowledge of the processes that drive volatility is required. For this reason we suggest a new and relatively simple method of analyzing the impact of the EMU on European stock market volatilities: the ‘switching regime beta approach’. This approach is able to allow shifts in the stochastic volatility model driving stock market return and analyze the link between markets, taking into consideration time-varying volatility characterized by persistence. Apart from the focus on Europe, this paper distinguishes itself from other papers (King and Wadhwani, 1990, Hamao et al., 1990, Lin et al., 1994, Karolyi, 1995, Koutmos, 1996, Kanas, 1998, Ng, 2000 and Fratzscher, 2001) by analyzing shock spillover using switching regime models. There are several reasons why regime switching models represent a good approach to analyze volatility spillover. First, this technique makes it possible to take into account the shifts between high and low states of volatility and correlations due to changes in the economic and financial context. Second, using this methodology, the persistence in second moments is reduced so that the problem of underestimated volatility in the high volatility state or the one of overestimated volatility in the low volatility state are overcome. Third, it allows for the fact that the time-varying character of conditional correlations, which is stressed in several studies (e.g. Bekaert and Harvey, 1995 and Bekaert and Harvey, 1997, Xiong, 2001 and Kyle and WeiXiong, 2001), is due also to regime switches in the spillover parameters. In the literature there are two previous works that use switching regime models to analyze volatility in the European stock markets: Beltratti and Morana, 2000 and Baele, 2002. However, these authors are not able to investigate whether most recently after the EMU, Asian crisis and globalization we do observe a break in the structure of volatility spillover from the world market index to European market indexes. In this paper we allow for the presence of a structural break in all or part of the parameters estimated. In particular we do not just investigate whether more recently the market indexes are characterized by high volatility regime but whether, respectively, in the high or low volatility regime we observe a structural break, that is if the high or low volatility parameters have been changed. To anticipate the main empirical results, the structure of the estimated volatility distribution suggests that in the last 4 years the world index distribution has observed an increase in the volatility parameter of the low regime. This means that in recent years, when markets are stable they present an higher volatility than before. Concerning the German idiosyncratic risk, the transition probabilities indicate an increase of the frequency of visiting the high volatility regime. Moreover, the link between European countries, which is usually higher when the volatility is high, in recent years has been increased. This means that the importance of the world market index shocks and of the German shocks spillover have increased for the EMU countries. However, the introduction of the euro has reduced the idiosyncratic volatility and increased the frequency of visiting the low volatility regime for the French and Italian idiosyncratic risk. The outline of the paper is as follows. We start by presenting the econometric methodology in Section 2. In Section 3 we discuss theoretical models and present in detail the economic meaning of our analysis. In Section 4 we describe the data and present our empirical results. Section 5 concludes.