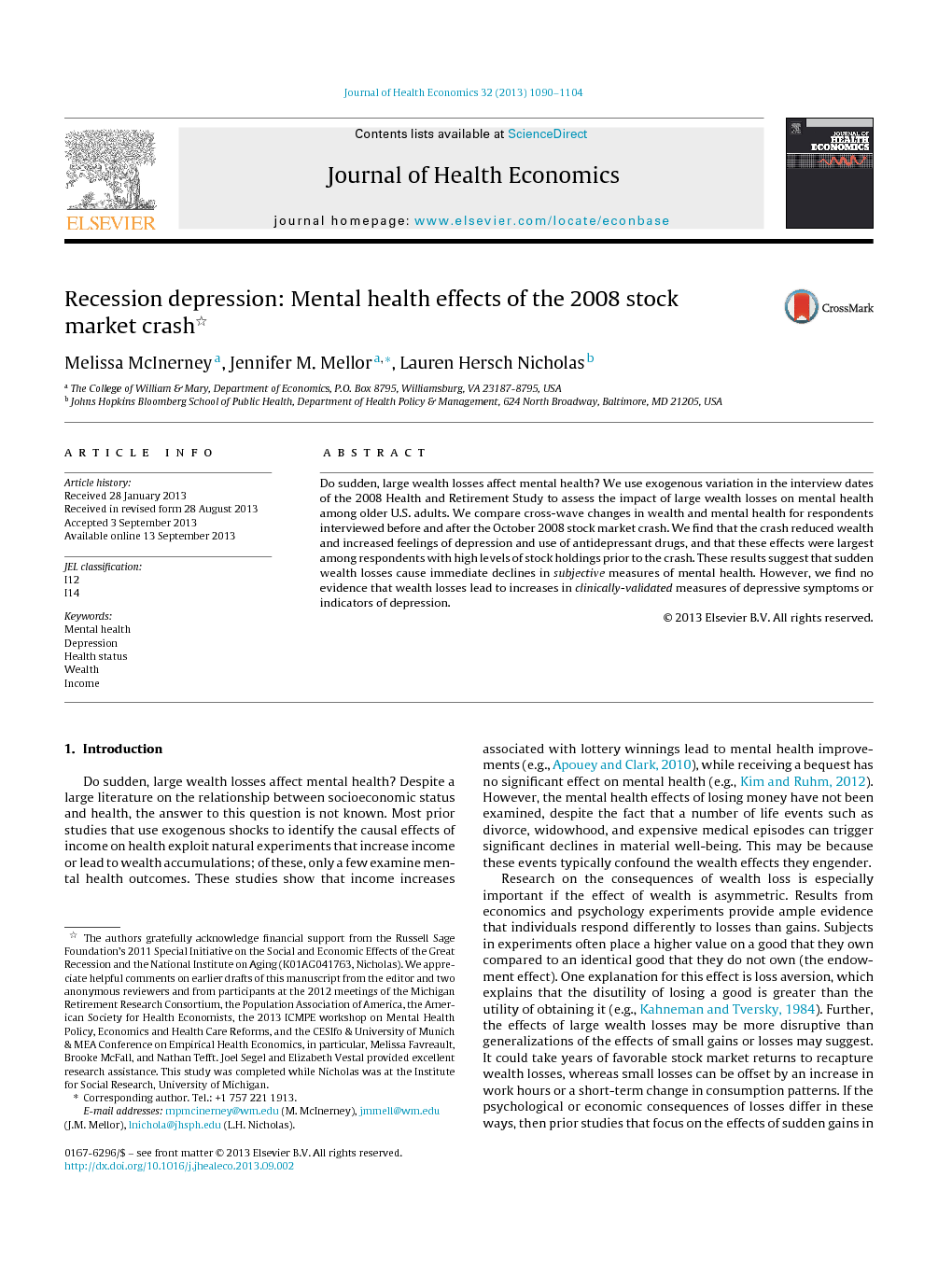 Do sudden, large wealth losses affect mental health? We use exogenous variation in the interview dates of the 2008 Health and Retirement Study to assess the impact of large wealth losses on mental health among older U.S. adults. We compare cross-wave changes in wealth and mental health for respondents interviewed before and after the October 2008 stock market crash. We find that the crash reduced wealth and increased feelings of depression and use of antidepressant drugs, and that these effects were largest among respondents with high levels of stock holdings prior to the crash. These results suggest that sudden wealth losses cause immediate declines in subjective measures of mental health. However, we find no evidence that wealth losses lead to increases in clinically-validated measures of depressive symptoms or indicators of depression.

Do sudden, large wealth losses affect mental health? Despite a large literature on the relationship between socioeconomic status and health, the answer to this question is not known. Most prior studies that use exogenous shocks to identify the causal effects of income on health exploit natural experiments that increase income or lead to wealth accumulations; of these, only a few examine mental health outcomes. These studies show that income increases associated with lottery winnings lead to mental health improvements (e.g., Apouey and Clark, 2010), while receiving a bequest has no significant effect on mental health (e.g., Kim and Ruhm, 2012). However, the mental health effects of losing money have not been examined, despite the fact that a number of life events such as divorce, widowhood, and expensive medical episodes can trigger significant declines in material well-being. This may be because these events typically confound the wealth effects they engender. Research on the consequences of wealth loss is especially important if the effect of wealth is asymmetric. Results from economics and psychology experiments provide ample evidence that individuals respond differently to losses than gains. Subjects in experiments often place a higher value on a good that they own compared to an identical good that they do not own (the endowment effect). One explanation for this effect is loss aversion, which explains that the disutility of losing a good is greater than the utility of obtaining it (e.g., Kahneman and Tversky, 1984). Further, the effects of large wealth losses may be more disruptive than generalizations of the effects of small gains or losses may suggest. It could take years of favorable stock market returns to recapture wealth losses, whereas small losses can be offset by an increase in work hours or a short-term change in consumption patterns. If the psychological or economic consequences of losses differ in these ways, then prior studies that focus on the effects of sudden gains in socioeconomic status may offer little guidance on the effects of losses on mental health. In this study, we identify the effect of large wealth losses on mental health by focusing on the immediate and largely unexpected declines in the net worth of U.S. households brought on by the stock market crash that occurred in the fall of 2008. In the 8-day trading period that began on October 1, 2008, the closing value of the Dow Jones Industrial Average (DJIA) fell by nearly 2400 points or roughly 22%. After a small uptick, the DJIA fell throughout the month; by the end of October, the index had reached its lowest level since 2003. By December 2008, retirement accounts had lost almost one-third of their value on average, and total losses were estimated at $2.8 trillion (Soto, 2008). Our identification strategy uses variation in the timing of interview dates for the 2008 wave of the Health and Retirement Study (HRS). Specifically, we examine respondent-specific changes in wealth and mental health between the 2006 and 2008 waves of the HRS, comparing changes for respondents whose 2008 interview took place before October of that year with the changes experienced by those interviewed after the October 2008 stock market crash. We allow the effects of the crash to vary by respondent's exposure, which we measure in pre-crash wealth in stocks and individual retirement accounts. Respondents interviewed post-crash lost significantly more non-housing wealth between the two survey waves than respondents interviewed before the crash. Results from several falsification and placebo tests suggest that our post-crash indicator identifies the effects of the stock market crash separately from the effects of changes in the housing market or the unobservable traits of respondents interviewed later in the year. We find mixed evidence of an effect of the crash on mental health. Subjective measures of mental health, such as “feeling depressed” and self-rated health, worsened among respondents interviewed post-crash compared to those interviewed prior to October 2008. These effects were concentrated among those respondents who lost more wealth in the crash (i.e., the wealthier half of stockholders). Although the crash had no effect on clinically-validated measures of depression, respondents who lost more wealth in the crash also showed large increases in antidepressant use.

In this study we exploit the exogenous variation in wealth created by the crash to address a question of long-standing interest in the health economic and social epidemiology literatures: what is the causal effect of wealth on different dimensions of health? Our study adds to a number of careful studies in the area but is unique in that we examine the immediate effects of sudden wealth losses on mental health. In comparison, the prior studies on the effects of income losses focus on mortality, and the prior studies on mental health effects examine increases in income. We find new evidence that the stock market crash of 2008 altered subjective measures of mental health for respondents with large holdings of stock. In reduced form specifications, we estimate that respondents whose wealth was most affected by the crash (and who lost nearly $250,000 as a result), had a nearly 50% increase in the likelihood of feeling depressed and a nearly 20% reduction in the likelihood of reporting excellent or very good health. However, we find no evidence that the wealth losses associated with the crash affected clinically-validated measures of depressive symptoms and indicators of depression. Respondents whose wealth was most affected by the crash experienced no significant changes in a summary score from the CES-D scale for depression or in a binary indicator of depression based on having three or more symptoms. Despite there being no change in signs of clinical depression, respondents who experienced large wealth losses and reductions in subjective health also exhibited a sizeable 35% increase in the likelihood of taking antidepressants. One explanation for this pattern of findings is that respondents who experience wealth losses deal with the resulting bad feelings by using antidepressant drugs inappropriately, i.e., when clinical symptoms of depression are not present. If so, this suggests a need for additional studies to support clearer guidelines for antidepressant use and prescribing practices, particularly pharmacological treatments for patients who have experienced shocks such as job loss or death of a loved one, a controversial clinical area (e.g., Mazure et al., 2000 and Simon, 2013). Alternatively, the increased medication use may reflect prophylactic prescription use that staved off major depressive episodes; a growing literature suggests that use of mental health treatments increases among groups exposed to adverse macroeconomic conditions. A limitation of our study is that we use an identification strategy that permits us to examine only the short-term mental health effects of the crash. Prior studies have found that subjects interviewed nearly two years after devastating events that result in large financial losses (e.g., involuntary job loss and bank fraud) showed increased rates of clinical depression (Gallo et al., 2000 and Ganzini et al., 1990). Even though we do not observe immediate increases in clinically-validated measures of depression following large wealth losses, there may be more severe long-term consequences that we are unable to quantify. Finally, this study contributes to the literature on the health consequences of adverse economic shocks, which includes studies of the recent U.S. foreclosure and economic crises by Currie and Tekin (2011), Deaton (2012) and Burgard et al. (2012) and research on Iceland's financial crisis by Ásgeirsdóttir et al. (2012). Like these other works, our study finds that severe macroeconomic events have important consequences for health, in addition to their effects on retirement plans and expectations (Coile and Levine, 2009 and McFall, 2011).