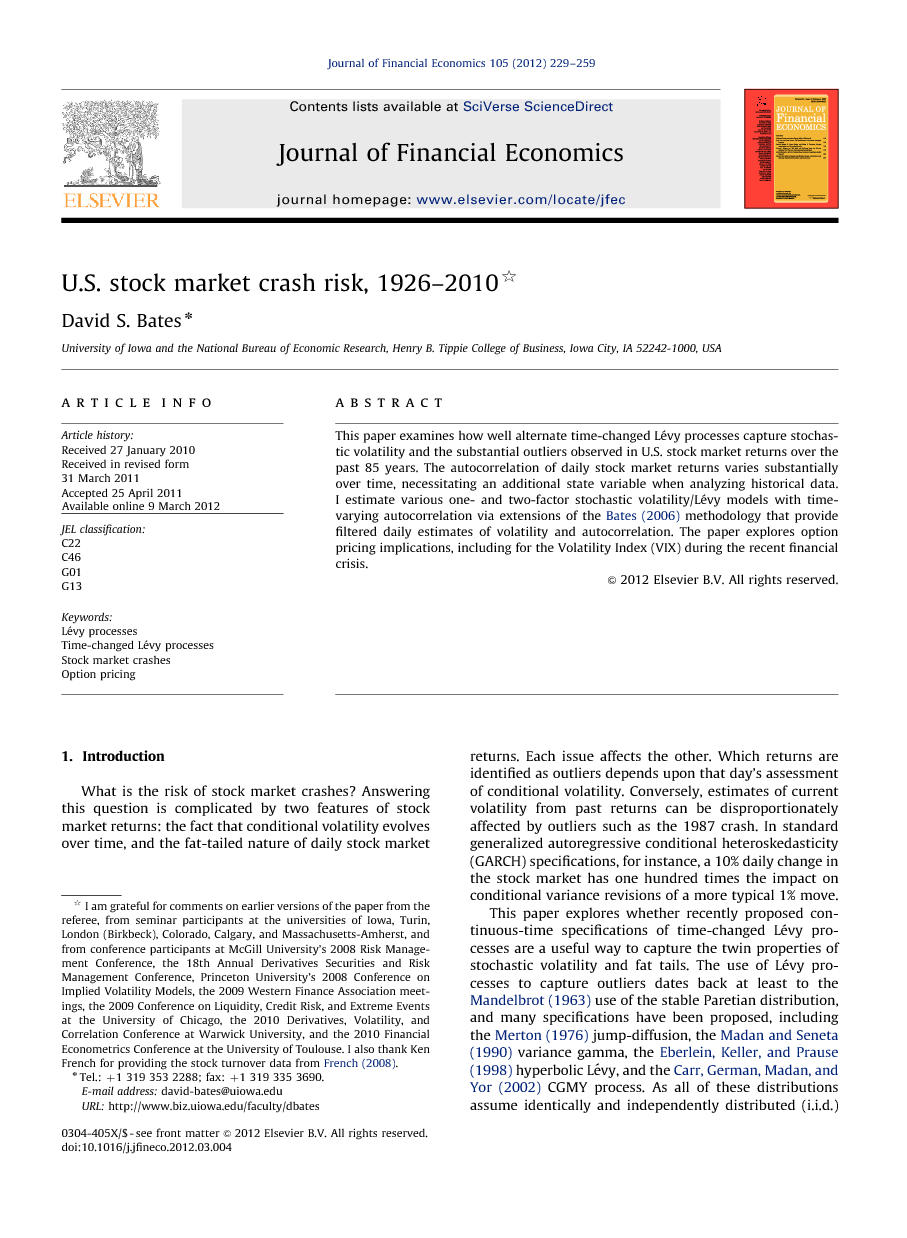 This paper examines how well alternate time-changed Lévy processes capture stochastic volatility and the substantial outliers observed in U.S. stock market returns over the past 85 years. The autocorrelation of daily stock market returns varies substantially over time, necessitating an additional state variable when analyzing historical data. I estimate various one- and two-factor stochastic volatility/Lévy models with time-varying autocorrelation via extensions of the Bates (2006) methodology that provide filtered daily estimates of volatility and autocorrelation. The paper explores option pricing implications, including for the Volatility Index (VIX) during the recent financial crisis.

This paper provides estimates of the time-changed Carr, Geman, Madan, and Yor (2003) CGMY Lévy process based on stock market excess returns, and compares them to the time-changed finite-activity jump-diffusions previously examined by Bates (2006). I draw the following three conclusions. First, it is important to recognize the fat-tailed properties of returns when filtering latent variables. Failure to do so makes latent variable estimates excessively sensitive to daily outliers larger than three standard deviations and affects parameter estimates—especially the parameters of the volatility process. However, such major outliers are relatively rare. Conditional volatility estimates from the less fat-tailed distributions [the Heston (1993) stochastic volatility model; the Carr and Wu (2003) log-stable model] diverge substantially from those of other distributions only in the weeks following large outliers. Second, it is not particularly important which fat-tailed distribution one uses. Estimates of the volatility process parameters and realizations are virtually unchanged across most specifications, while the option pricing implications are virtually identical for all but the deepest out-of-the-money options. Third, conditional upon no recent outliers, even the Heston stochastic volatility model fits option prices similarly to the jump models for all but deep out-of-the-money options. For these stochastic volatility or stochastic intensity models, the estimated tilt of the volatility smirk for near-the-money options (±2 standard deviations) appears primarily driven by the leverage effect. I also present evidence of some structural shifts over time in the data generating process. Most striking is the apparently nonstationary evolution of the first-order autocorrelation of daily stock market returns, which rose from near-zero in the 1930s to around 35% in 1971 before drifting down again to near-zero values at the end of the 20th century, and even negative in the 21st. The high autocorrelation estimates in the 1960s and 1970s are clearly attributable to a stale-price problem from low stock turnover and are of substantial importance when assessing historical stock market volatility. The paper develops methods of dealing with time-varying autocorrelation, by treating it as an additional latent state variable to be filtered from observed data. Furthermore, the paper develops a nonaffine model (Model 2) of evolving autocorrelation that can nevertheless be easily estimated on time series data. The model generates an affine risk-neutral process for pricing index options and is consistent with the inverse relationship between autocorrelation and volatility found by LeBaron (1992). Finally, the paper also shows longer-term swings in volatility, which are modeled using a two-factor concatenated volatility model. Estimating a latent variable (the central tendency) underlying another latent variable (spot variance) underlying daily stock market returns is perforce imprecise. Nevertheless, the two-factor model usefully highlights the misleading precision of multi-period forecasts from one-factor variance models. One-factor models erroneously predict tight confidence intervals for implicit volatility at longer maturities, given hypothesized volatility mean reversion to an identifiable mean. The two-factor model estimates spot volatilities and term structures of implicit volatilities more accurately than the one-factor model—with, however, substantial gaps remaining on average between observed and estimated at-the-money implicit volatilities. Alternate data sources could yield more accurate assessments of spot variance and of its central tendency: intradaily realized variances, for instance, or the high-low range data examined by Alizadeh, Brandt, and Diebold (2002). This paper has focused upon daily returns because of its focus on daily crash risk, but the AML methodology can equally be applied to estimating conditional volatilities from those alternative data. Realized variances are noisy signals of latent conditional variance when intradaily jumps are present, indicating the need for filtration methodologies such as AML. Such applications are potential topics for future research.