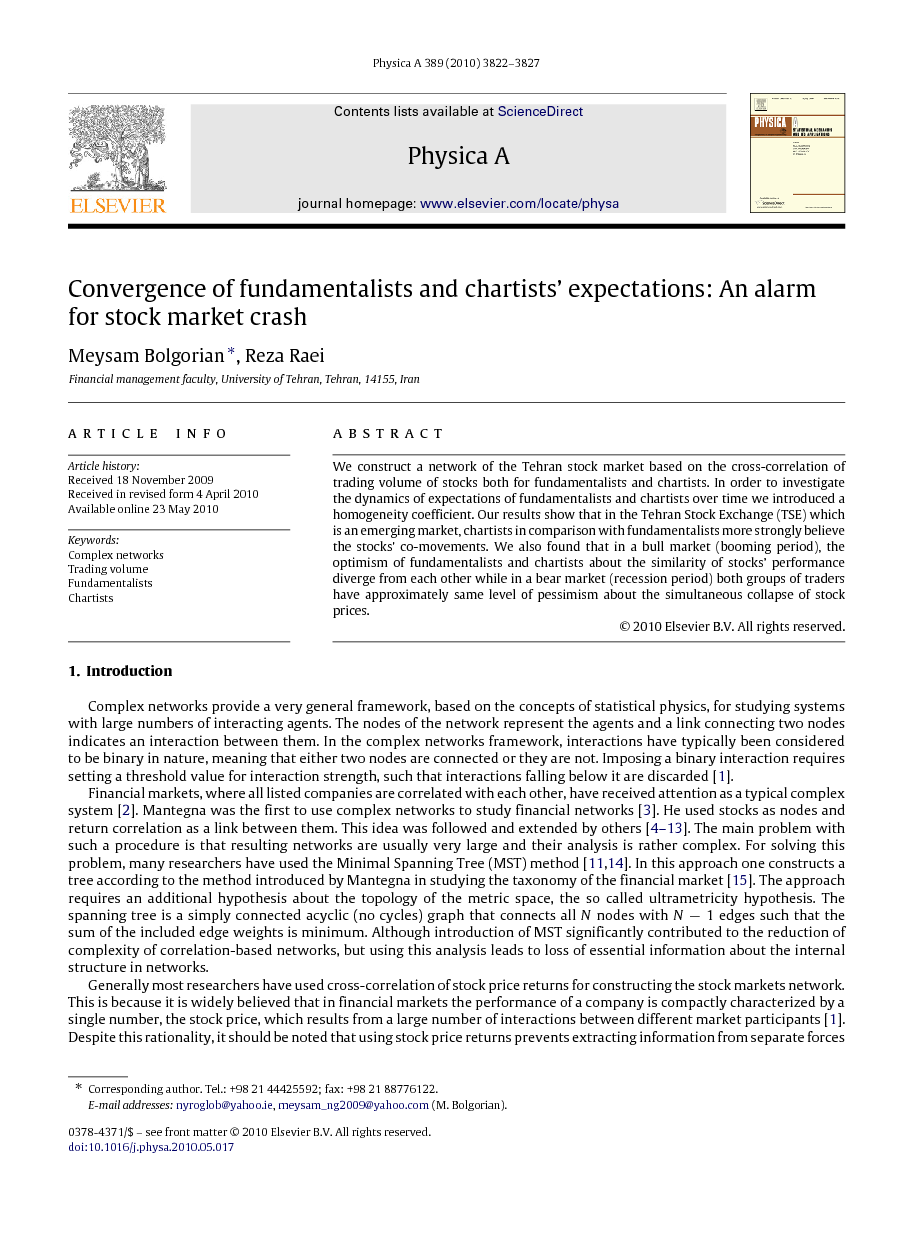 Complex networks provide a very general framework, based on the concepts of statistical physics, for studying systems with large numbers of interacting agents. The nodes of the network represent the agents and a link connecting two nodes indicates an interaction between them. In the complex networks framework, interactions have typically been considered to be binary in nature, meaning that either two nodes are connected or they are not. Imposing a binary interaction requires setting a threshold value for interaction strength, such that interactions falling below it are discarded [1]. Financial markets, where all listed companies are correlated with each other, have received attention as a typical complex system [2]. Mantegna was the first to use complex networks to study financial networks [3]. He used stocks as nodes and return correlation as a link between them. This idea was followed and extended by others [4], [5], [6], [7], [8], [9], [10], [11], [12] and [13]. The main problem with such a procedure is that resulting networks are usually very large and their analysis is rather complex. For solving this problem, many researchers have used the Minimal Spanning Tree (MST) method [11] and [14]. In this approach one constructs a tree according to the method introduced by Mantegna in studying the taxonomy of the financial market [15]. The approach requires an additional hypothesis about the topology of the metric space, the so called ultrametricity hypothesis. The spanning tree is a simply connected acyclic (no cycles) graph that connects all NN nodes with N−1N−1 edges such that the sum of the included edge weights is minimum. Although introduction of MST significantly contributed to the reduction of complexity of correlation-based networks, but using this analysis leads to loss of essential information about the internal structure in networks. Generally most researchers have used cross-correlation of stock price returns for constructing the stock markets network. This is because it is widely believed that in financial markets the performance of a company is compactly characterized by a single number, the stock price, which results from a large number of interactions between different market participants [1]. Despite this rationality, it should be noted that using stock price returns prevents extracting information from separate forces acting in financial markets, say fundamentalists and chartists investors, i.e. traders who act on the basis of fundamental analysis and those who act on the basis of technical analysis. The importance of the interplay of these two classes of investor has been stressed by several recent works to be essential in order to retrieve the important stylized facts of stock market price statistics [16], [17], [18], [19], [20], [21], [22], [23] and [24]. Fundamental analysts watch deviations from an equilibrium level of the price as implied by a fundamental model. If the prices are above the equilibrium level the asset is sold and leads to a decline in the prices. This is while the chartists are more rely on trends. For example, if the technical analysts believe that there is no indication of a trend reversal they will keep on buying the asset which supports the price of that asset. What happens to the price of asset depends on the net effect of the forces supply and demand by fundamental and technical analysts. The most significant aspect of this paper is using the separate data of trading volume of fundamentalists (institutional investors such as large funds) and chartists (individual investors) for each stock for constructing the stock market network. In other words, the cross-correlation of trading volume of each kind of investor (fundamentalist and chartist) for each stock is used as a connection criterion. The rationale behind this approach is that studying the topological differences of these two networks over time provides a better understanding of the attitudes of these two groups of traders toward the stocks co-movement. The rest of the paper is organized as follows. In Section 2 the network construction procedure is described. Description of method and empirical results will be presented in Section 3 and finally the paper closes with the conclusion.

In this paper we investigated the Tehran Stock Exchange network using daily trading volume of fundamentalists and chartists. To measure the dynamics of belief of these two groups of investors about the co-movement of stock prices, a homogeneity coefficient is defined. Examining this coefficient over time, we observed a general increasing trend of this coefficient. Another important finding of the present work is that generally chartists more strongly believe the co-movement of stock performance, although the elimination of overall market behavior leads to an increase in the number of links in chartists’ networks. We also reported an interesting feature of Tehran stock exchange which indicates that in booming periods expectations of fundamentalists and chartists diverge from each other, while in bear markets a convergence of opinions about the similarity of stocks’ performance has been observed.