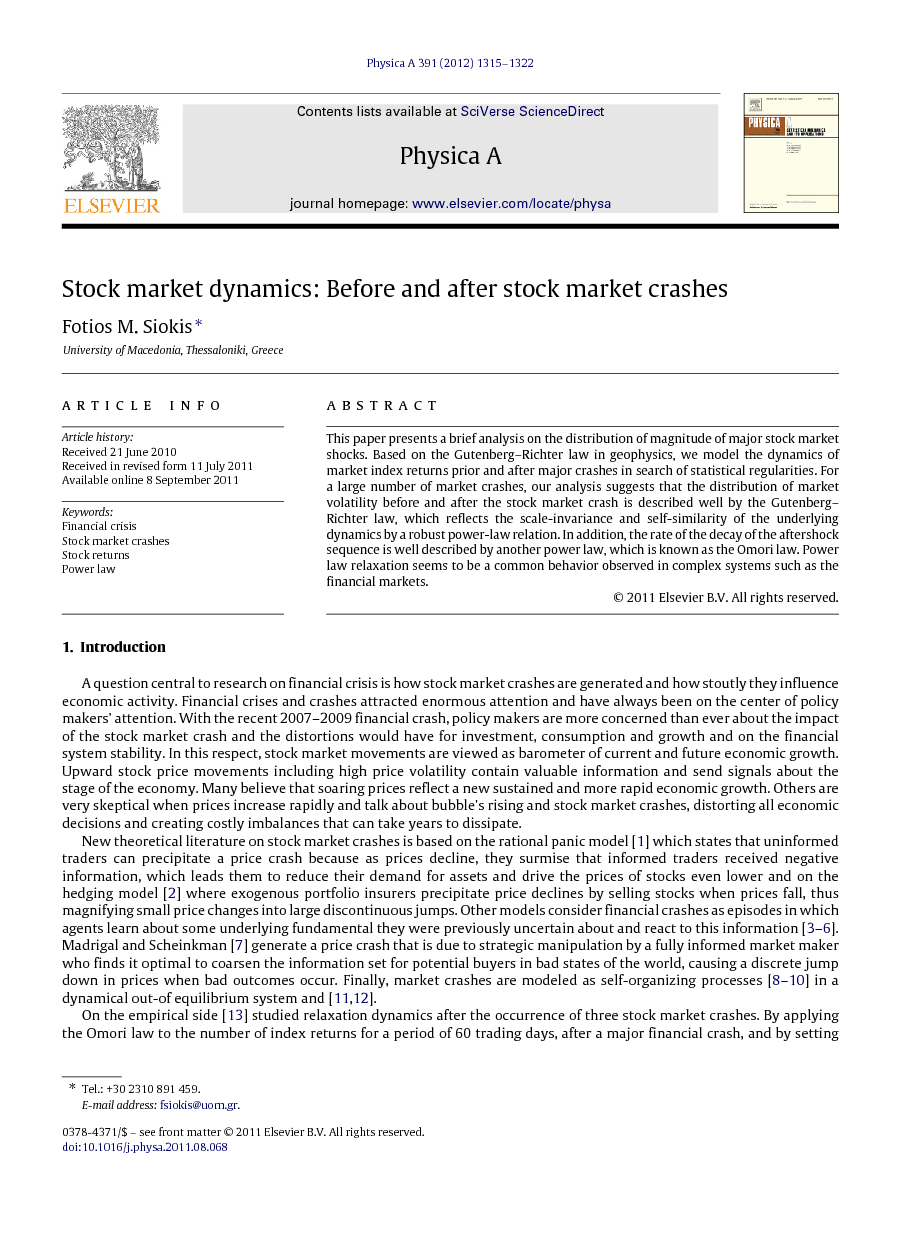 This paper presents a brief analysis on the distribution of magnitude of major stock market shocks. Based on the Gutenberg–Richter law in geophysics, we model the dynamics of market index returns prior and after major crashes in search of statistical regularities. For a large number of market crashes, our analysis suggests that the distribution of market volatility before and after the stock market crash is described well by the Gutenberg–Richter law, which reflects the scale-invariance and self-similarity of the underlying dynamics by a robust power-law relation. In addition, the rate of the decay of the aftershock sequence is well described by another power law, which is known as the Omori law. Power law relaxation seems to be a common behavior observed in complex systems such as the financial markets.

A question central to research on financial crisis is how stock market crashes are generated and how stoutly they influence economic activity. Financial crises and crashes attracted enormous attention and have always been on the center of policy makers’ attention. With the recent 2007–2009 financial crash, policy makers are more concerned than ever about the impact of the stock market crash and the distortions would have for investment, consumption and growth and on the financial system stability. In this respect, stock market movements are viewed as barometer of current and future economic growth. Upward stock price movements including high price volatility contain valuable information and send signals about the stage of the economy. Many believe that soaring prices reflect a new sustained and more rapid economic growth. Others are very skeptical when prices increase rapidly and talk about bubble’s rising and stock market crashes, distorting all economic decisions and creating costly imbalances that can take years to dissipate. New theoretical literature on stock market crashes is based on the rational panic model [1] which states that uninformed traders can precipitate a price crash because as prices decline, they surmise that informed traders received negative information, which leads them to reduce their demand for assets and drive the prices of stocks even lower and on the hedging model [2] where exogenous portfolio insurers precipitate price declines by selling stocks when prices fall, thus magnifying small price changes into large discontinuous jumps. Other models consider financial crashes as episodes in which agents learn about some underlying fundamental they were previously uncertain about and react to this information [3], [4], [5] and [6]. Madrigal and Scheinkman [7] generate a price crash that is due to strategic manipulation by a fully informed market maker who finds it optimal to coarsen the information set for potential buyers in bad states of the world, causing a discrete jump down in prices when bad outcomes occur. Finally, market crashes are modeled as self-organizing processes [8], [9] and [10] in a dynamical out-of equilibrium system and [11] and [12]. On the empirical side [13] studied relaxation dynamics after the occurrence of three stock market crashes. By applying the Omori law to the number of index returns for a period of 60 trading days, after a major financial crash, and by setting a large threshold, they found that the index return is well described by a power law function. Selcuk [14] investigated daily stock market data for a number of emerging markets and concludes that all crashes tested follow the Omori law [15]. Also, [16] tested Power-law relaxation of aftershocks for long periods following several other intermediate-size crashes. Omori processes after market crashes exist not only on very large scales, but on less significant shocks as well. Moreover, they show that such Omori processes on different scales can occur within the same time period. This leads to self-similar features of the volatility time series, meaning that some of the aftershocks of a large crash can be considered as subcrashes that themselves initiate Omori processes on a smaller scale. Mu and Zhou [17] on the other hand, studied four stock market crashes of the Shanghai Stock Exchange Composite index and concluded that although volatility decays as a power law it deviates significantly from the Omori law. Lastly, Petersen et al. [18] investigated cascading dynamics immediately before and after 219 market crashes with the use of three different empirical laws, i.e. the Omori law, the productivity law and the Bath law. Their findings quantitative relate the main shock magnitude and the parameters quantifying the decay of volatility aftershocks as well as the volatility preshocks. In this study we aim to better understand market shocks and to model the dynamics of a market’s index returns before and after of a major crash, by looking at the activity of the stock market index in order to arrive at a statistical regularity with respect to the number of times the absolute value index return exceeds a given threshold value. Most of the previous studies have focused on the applicability of the Omori law in order to document the relaxation dynamics of aftershocks. In our study we make use of Gutenberg–Richter law (G–R law) formulated in 1944 [19]. We analyze a large number of US stock market crashes, based on daily data of the Dow Jones Industrial Index (DJIA) and compare two distinct crashes, namely the great crash of 1929 and the crash of 1987. As a robustness test and in line with Lillo and Mantegna and Weber et al., we also compare the results with two other shocks, the 1997 and 1998 crashes. We identify common regularities and derive valuable results with policy making implications. To best of our knowledge this is the first attempt made to test the validity of G–R law in U.S. stock market, by using daily data and for a large number of stock market shocks. Finally, we test power law relaxation of aftershocks by introducing another empirical power law, the Omori law.

Firstly, in this present work we attempt to analyze the scaling properties of a number of sequences generated by crashes /mainshocks in the NY Stock Exchange. We study the frequency–magnitude distribution of aftershocks and foreshocks caused by mainshocks. In our attempt to find any statistical regularity we conclude that all sequences generated by the crashes obey a power law and can be accurately depicted by the G–R law. The frequency–magnitude distribution exhibits scale invariability and appears to be self-similar. Furthermore, we find that the bb-values of the magnitude–frequency distribution are different among earlier aftershocks and later ones and between the 1929 and 1987 crashes. The 1987 aftershock sequence is characterized by a shorter but higher volatility period. In addition, a comparison between foreshocks and aftershocks reveals different magnitude–frequency distributions. If this is valid, it should have important implications for financial crash prediction. But in order to test this proposition a construction of a complete financial crash catalog is required. Lastly, in line with Lillo and Mantegna and Weber et al., we test the Omori law for 1929, 1987, 1997 and 1998 crashes. Instead of minute-to-minute scale, we test the Omori law on a daily scale and we find that the power law holds for at least 100 days after the mainshock. These findings reinforce the results derived by Lillo and Mantegna and Weber et al., showing that the Omori law for earthquakes holds after crashes of very large magnitude in the NYSE. The stock market volatility above a certain threshold shows a power law decay well described by the Omori law.