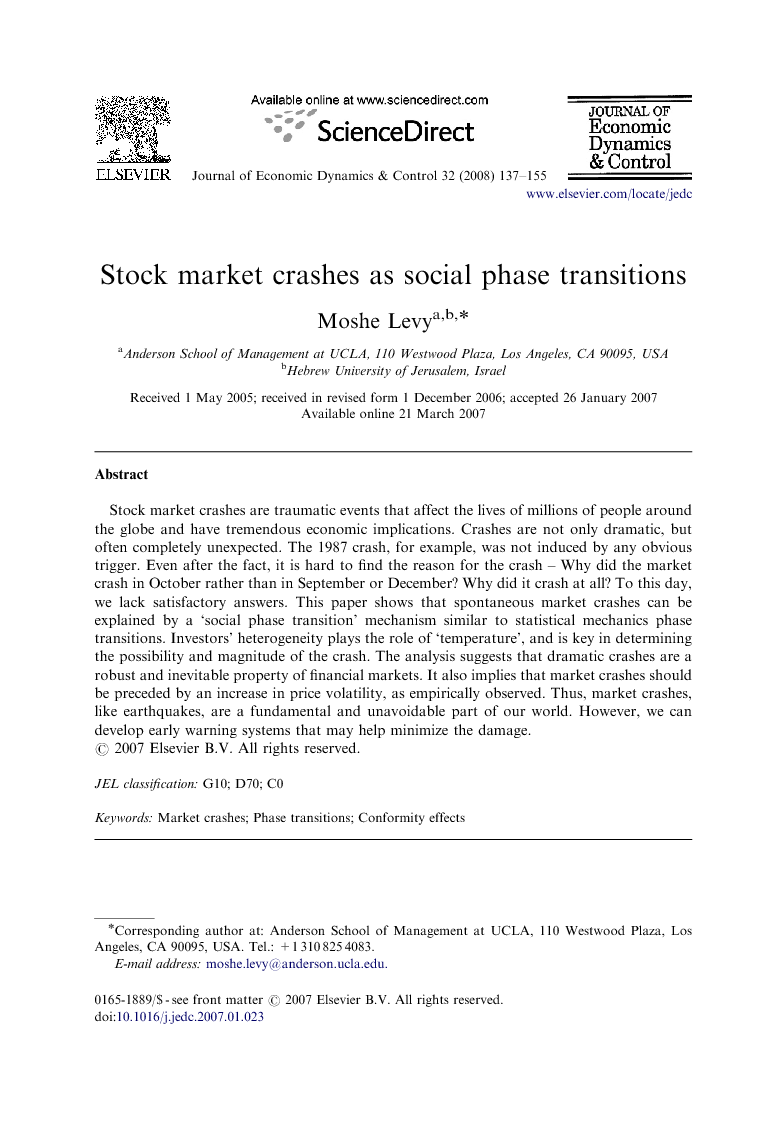 Stock market crashes are traumatic events that affect the lives of millions of people around the globe and have tremendous economic implications. Crashes are not only dramatic, but often completely unexpected. The 1987 crash, for example, was not induced by any obvious trigger. Even after the fact, it is hard to find the reason for the crash – Why did the market crash in October rather than in September or December? Why did it crash at all? To this day, we lack satisfactory answers. This paper shows that spontaneous market crashes can be explained by a ‘social phase transition’ mechanism similar to statistical mechanics phase transitions. Investors’ heterogeneity plays the role of ‘temperature’, and is key in determining the possibility and magnitude of the crash. The analysis suggests that dramatic crashes are a robust and inevitable property of financial markets. It also implies that market crashes should be preceded by an increase in price volatility, as empirically observed. Thus, market crashes, like earthquakes, are a fundamental and unavoidable part of our world. However, we can develop early warning systems that may help minimize the damage.

The daily fluctuations of the S&P500 index have a standard deviation of approximately 1%. On October 19, 1987, this index fell by more than 20%, a very dramatic event notoriously known as the ’87 crash. If the crash would have been a response to a 9/11 type of catastrophe, it would not have been an economic puzzle. However, no significant event triggered the crash. It appears to have been spontaneous. This phenomenon is very difficult to explain with standard economic models (see Roll, 1988a).1 In statistical mechanics, phase transitions where a very small parameter change leads to a dramatic change in the system's macroscopic properties have been extensively studied (see, for example, Stanley, 1987; Anderson, 1997). Thus, in searching for an explanation for market crashes, it is natural to look for analogies between stock markets and statistical mechanics systems. Indeed, stock market systems have some fundamental features in common with statistical mechanics systems, such as a system of spins in a magnet. Both systems are composed of many interacting elements (investors or spins) that have an inclination to conform with one another. For spins, this ‘inclination’ is driven by the magnetic force. Investors also have various economic and psychological reasons to conform with each other. For instance, investors may take the ‘average investor behavior’ as an informational signal: If an investor observes a buying ‘frenzy’, he may interpret this as everybody else having some positive information, which may lead him to join the frenzy (and the opposite for selling; see Welch, 2000; Bikhchandani et al., 1992).2 Investors may also rationally choose to conform with the actions of their peers in order to hedge against changes in consumer prices that may decrease their buying power (DeMarzo et al., 2004). Psychological and social reasons, such as peer pressure, may also drive investors to conform (Duflo and Saez, 2002; Hong et al., 2003; Madrian and Shea, 2000). We show here that just as the magnetic interaction plays a key role in spin system phase transitions, the conformity effects play an analog central role in market crashes. The idea of modeling social interactions in a way similar to interactions in many-body statistical mechanics systems has fascinated many researchers, and has led to important insights. Some of the main studies taking this approach are Weidlich, 1972 and Weidlich, 1991, Föllmer (1974), Haken (1977), Topol (1991), Brock (1993), Lux, 1995 and Lux, 1997, Durlauf (1999), and Brock and Durlauf (2001). Most of these studies typically model the social system investigated as a system of identical interacting ‘particles’ or ‘spins’ with stochastic dynamics. While this approach has proven extremely useful, it has been criticized on the grounds that spin systems and financial markets are fundamentally different in some key aspects (Hors and Lordon, 1997). Spins are identical, while investors are different one from another, and this heterogeneity has been shown to be important in economics (see Kirman, 1992; Milgrom and Stokey, 1982; Levy and Levy, 1996). Furthermore, the state of a spin is inherently stochastic due to the system temperature. In contrast, investors are typically modeled as rational agents who act deterministically to maximize their objective (or utility) function (as in von Neuman and Morgenstern, 1944; Arrow, 1965; Kahneman and Tversky, 1979). This paper shows that despite these important differences, the analogy between stock markets and spin systems is very deep, and that spontaneous market crashes can be interpreted as a social phase transition phenomenon. We show that the phase transition intuition carries through, even when investors are heterogeneous and there is no ‘noise’ or temperature in the system. We find that, regardless of the motivation for conformity, when the inclination to conform is strong enough relative to the investors’ heterogeneity the market is susceptible to undergo a crash, even with no exogenous trigger. A strong conformity effect may lead to multiple equilibria: The observation of high market participation justifies high market participation by investors who are inclined to conform, and could therefore be a consistent equilibrium; similarly, the observation of low market participation justifies low market participation, and could therefore also be an equilibrium, and so on. We show that when multiple equilibria exist market crashes may occur. We then provide the formal conditions for the existence of multiple equilibria, discuss the possible discontinuous transition from one equilibrium to another, and relate the magnitude of the transition, or crash, to the strength of the conformity effects and to the degree of investors’ heterogeneity. Furthermore, we show that in this framework a crash is expected to be preceded by increased volatility. This implication of the model is consistent with empirical observation (see, for example, Leland and Rubinstein, 1988; Schwert, 1990). It also offers the possibility to predict, and perhaps even mitigate, market crashes. The structure of this paper is as follows. In Section 1, we present the framework of the analysis. Section 3 discusses the possibility of crashes, and the relation between the crash magnitude and the strength of the conformity effects and the degree of investor heterogeneity. Section 3 theoretically shows that volatility is expected to increase preceding a crash and thus can be used as an early warning sign. The magnitude of the increased volatility effect is investigated via simulation. Section 4 discusses the implications of the results and suggests further lines of investigation.

Every day information flows into the market inducing price changes. On days with typical information flow market returns are in the neighborhood of ±1%. However, on October 19, 1987, the same typical information flow caused the market to crash by more than 20%. This represents an observation which is about 20 standard deviations away from the daily mean, an event that one would never expect to observe in random drawings from a normal distribution. How can this dramatic and surprising phenomenon be understood? This study shows that dramatic and spontaneous market crashes, crashes that are not triggered by a significant exogenous trigger, are a natural and robust property of markets with conformity effects. There are many motives, rational, social and psychological which make investors in the stock market inclined to conform with their peers. A necessary condition for crashes is that the strength of the conformity effects is large relative to investors’ heterogeneity. Furthermore, the stronger the conformity effects and the more homogeneous the investors are, the larger the magnitude of the crash. It should be emphasized that the analysis presented here does not hinge on special assumptions regarding preferences, particular trading strategies, the information process, the origin of the conformity effect, etc. No ‘fine tuning’ of the parameters is required to generate market crashes. On the contrary, the results are very general and robust. This implies that crashes are a natural and inevitable part of markets with conformity effects. While it may be impossible to predict the next change in price in a market where the flow of new information is random, it is possible to indicate whether the market is close to a crash point by observing the market's volatility. Our framework yields a theoretical prediction that even if the random process generating new information is constant, volatility is expected to peak just before the crash. This effect may be quite pronounced, as illustrated by numerical simulation, and conforms with the empirical findings. In this study, we take the function f that characterizes the conformity and heterogeneity factors, as given. However, it is clear that the inclination to conform and investors’ heterogeneity may themselves depend on the market conditions. In other words, the shape of the function f may also change dynamically. Studying the magnitude of the conformity effects and their dependence on market conditions empirically and experimentally may yield further insight and better tools for the understanding and prediction of market crashes. The concept of spontaneous market crashes as a manifestation of a social phase transition is rooted in the deep relationship between statistical mechanics systems and economic systems of interacting agents. In recent years, more and more evidence of this deep relationship has been revealed,18 and has greatly contributed to our understanding of economic markets as complex interacting systems.