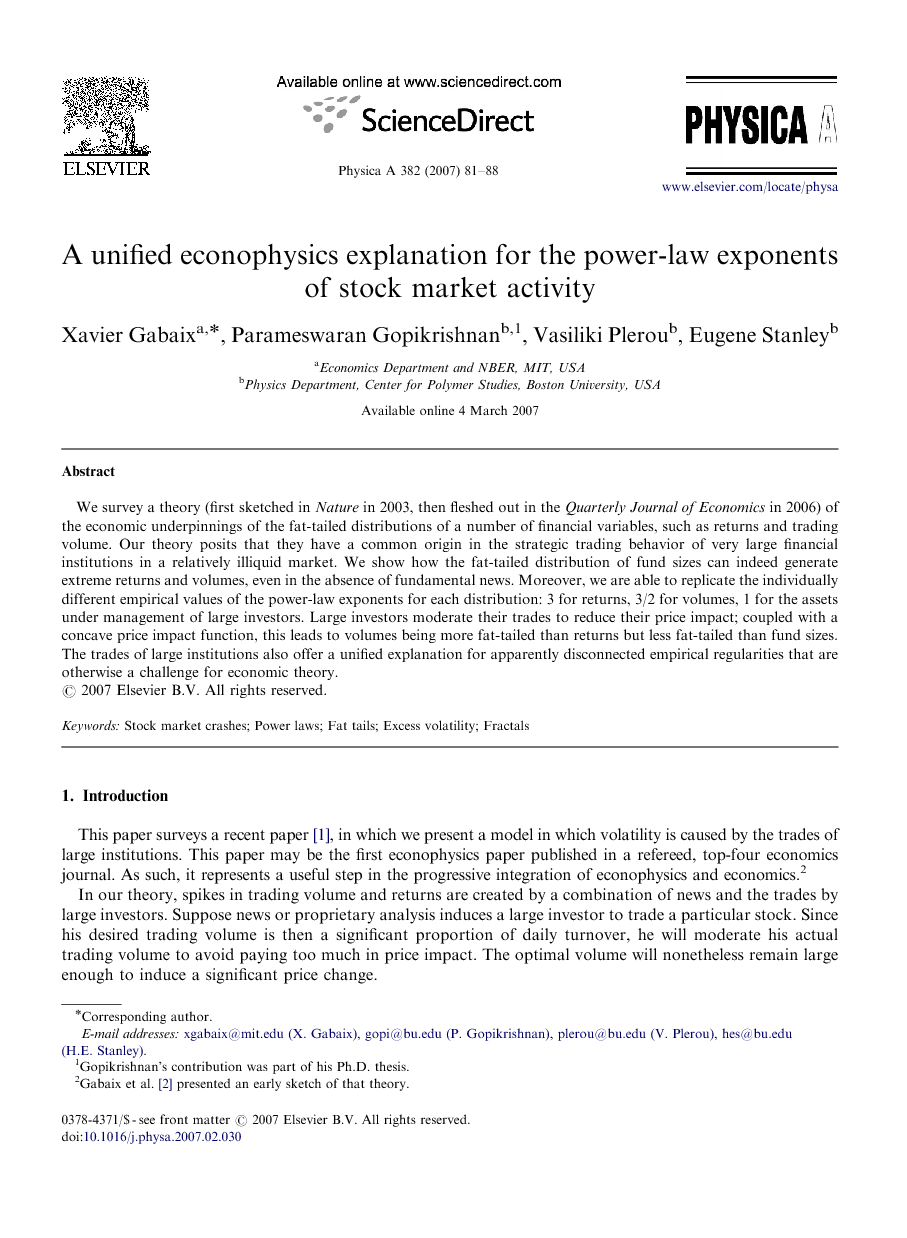 We survey a theory (first sketched in Nature in 2003, then fleshed out in the Quarterly Journal of Economics in 2006) of the economic underpinnings of the fat-tailed distributions of a number of financial variables, such as returns and trading volume. Our theory posits that they have a common origin in the strategic trading behavior of very large financial institutions in a relatively illiquid market. We show how the fat-tailed distribution of fund sizes can indeed generate extreme returns and volumes, even in the absence of fundamental news. Moreover, we are able to replicate the individually different empirical values of the power-law exponents for each distribution: 3 for returns, 3/2 for volumes, 1 for the assets under management of large investors. Large investors moderate their trades to reduce their price impact; coupled with a concave price impact function, this leads to volumes being more fat-tailed than returns but less fat-tailed than fund sizes. The trades of large institutions also offer a unified explanation for apparently disconnected empirical regularities that are otherwise a challenge for economic theory.

This paper surveys a recent paper [1], in which we present a model in which volatility is caused by the trades of large institutions. This paper may be the first econophysics paper published in a refereed, top-four economics journal. As such, it represents a useful step in the progressive integration of econophysics and economics.2 In our theory, spikes in trading volume and returns are created by a combination of news and the trades by large investors. Suppose news or proprietary analysis induces a large investor to trade a particular stock. Since his desired trading volume is then a significant proportion of daily turnover, he will moderate his actual trading volume to avoid paying too much in price impact. The optimal volume will nonetheless remain large enough to induce a significant price change. Traditional measures, such as variances and correlations, are of limited use in analyzing spikes in market activity. Many empirical moments are infinite; moreover, their theoretical analysis is typically untractable. Instead, a natural object of analysis turns out to be the tail exponent of the distribution, for which some convenient analytical techniques apply. Furthermore, there is much empirical evidence on the tails of the distributions, which appears to be well approximated by power laws. For example, the distribution of returns r over daily or weekly horizons decays according to P(|r|>x)∼x-ζrP(|r|>x)∼x-ζr where ζrζr is the tail or Pareto exponent. This accumulated evidence on tail behavior is useful to guide and constrain any theory of the impact of large investors. Specifically, our theory unifies the following stylized facts: (i) the power-law distribution of returns, with exponent ζr≃3ζr≃3; (ii) the power-law distribution of trading volume, with exponent ζq≃1.5ζq≃1.5; (iii) the power law of price impact; (iv) the power-law distribution of the size of large investors, with exponent ζS≃1ζS≃1. Existing models have difficulty in explaining facts (i)–(iv) together, not only the power-law behavior in general, but also the specific exponents. For example, efficient market theories rely on news to move stock prices and thus can explain the empirical finding only if the news is power-law distributed with an exponent ζr≃3ζr≃3. However, there is nothing a priori in the efficient markets hypothesis that justifies this assumption. Similarly, GARCH models generate power laws, but need to be fine-tuned to replicate the exponent of 3.3 We rely on previous research to explain (iv), and develop a trading model to explain (iii). We use these facts together to derive the optimal trading behavior of large institutions in relatively illiquid markets. The fat-tailed distribution of investor sizes generates a fat-tailed distribution of volumes and returns (see also Refs. [22], [23] and [24]). When we derive the optimal trading behavior of large institutions, we are able to replicate the specific values for the power-law exponents found in stylized facts (i) and (ii).4 In addition to explaining the above facts, an analysis of tail behavior may have a number of wider applications in option pricing,5 and risk management.