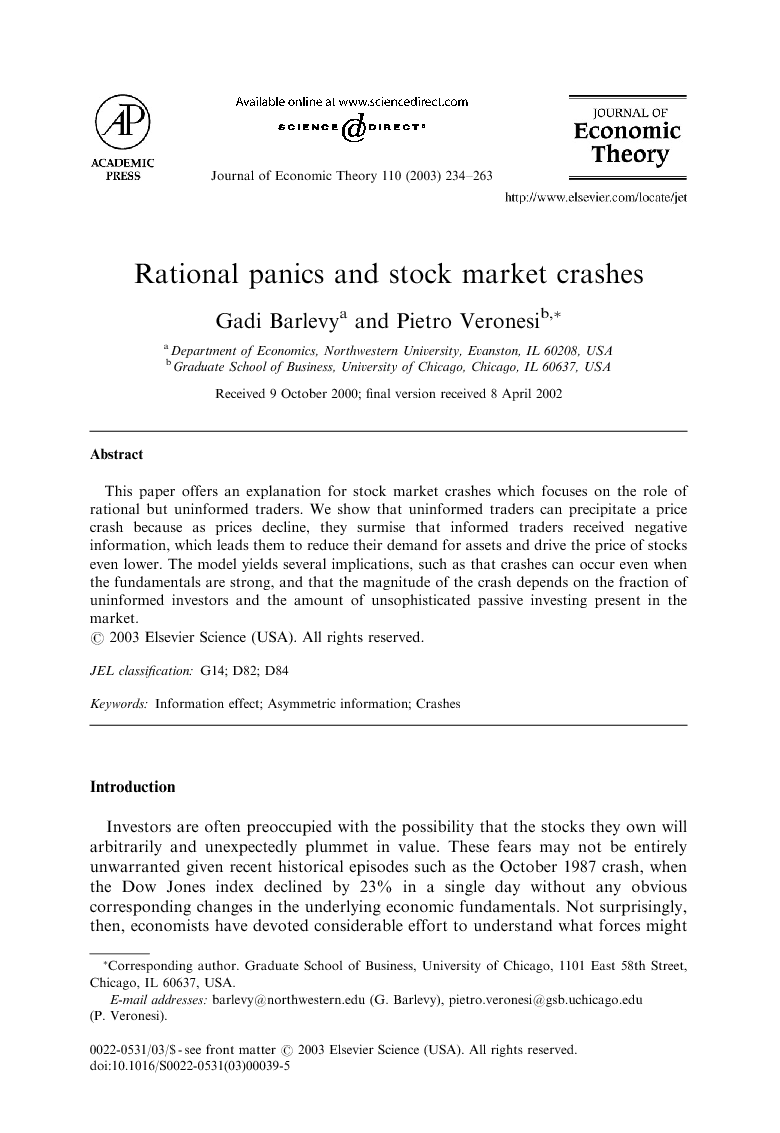 This paper offers an explanation for stock market crashes which focuses on the role of rational but uninformed traders. We show that uninformed traders can precipitate a price crash because as prices decline, they surmise that informed traders received negative information, which leads them to reduce their demand for assets and drive the price of stocks even lower. The model yields several implications, such as that crashes can occur even when the fundamentals are strong, and that the magnitude of the crash depends on the fraction of uninformed investors and the amount of unsophisticated passive investing present in the market.

This paper constructs a model that formalizes the notion that crashes—abrupt changes in the price of a stock that occur despite the absence of any corresponding change in the economic fundamentals of the underlying asset—could arise because of the behavior of uninformed traders who panic and cause the price of stocks to plummet. The mechanism we describe is identical to the one developed by Gennotte and Leland [8] in which exogenous portfolio insurers precipitate price declines by selling stocks when prices fall, thus magnifying small price changes into large, discontinuous jumps. In our framework, it is uninformed traders who sell stocks at low prices, but this is rational for them since they try to read information they know is available to other traders who are active in the market. Thus, there is no need to appeal to exogenous trading motives or systematic misperception among traders about the motives of others in order to sustain this mechanism for crashes. While we view our model as a theoretical contribution of how this explanation can be formally modelled, we believe our story has some empirical plausibility for actual stock trading, and so we conclude with short remarks why our explanation can accord with actual crashes. Previous authors have ascribed as an important role to uninformed traders in precipitating price crashes. For example, White [21] writes During the tulipmania, Garber notes that the middle classes and even monied workers began to speculate in the market for tulips, which previously had been the province of specialists. In their enthusiasm to participate, new investors seem incredibly incautious... In 1873, new German investors played a prominent role. They busily acquired new, untested foreign securities for their portfolios. In the 1920s the shift in business financing from short-term commercial bank loans to bonds and stocks meant that instead of commercial banks who had considerable experience in evaluating firms, the general investing public became the chief creditors of corporations. Americans who had never owned stocks before were now buying. Given the increased difficulty of evaluating fundamentals and the general optimism from the decade of prosperity, it is not surprising that prices were pushed above fundamentals. Similarly in the 1980s, new financial instruments drew in new investors from both at home and abroad. (p. 238) The role of nervous investors was even noted in the original Brady report [4] as one of the causes of the 1987 crash. As quoted by Wyatt [24], the report notes that “to the market, [mutual fund investors’] behavior looked much like that of the portfolio insurers, that is, selling without primary regard to price.” Our paper is the first to our knowledge to provide a formal model that rationalizes these observations. Given that stock market participation has increased over the past decade, particularly among small investors who are more likely to be uninformed about economic fundamentals in real time, our analysis suggests that stock markets today may be vulnerable to crashes, despite the fact that the use of stocks for portfolio insurance has largely disappeared. Moreover, the recent shift from passive investing strategies to more aggressive trading practices such as day-trading, which are more reactive to prices, might very well serve to magnify the magnitude of price crashes if they were to occur, since passive traders tend to mitigate price crashes by blindly buying up the stocks from those who panic and sell them.