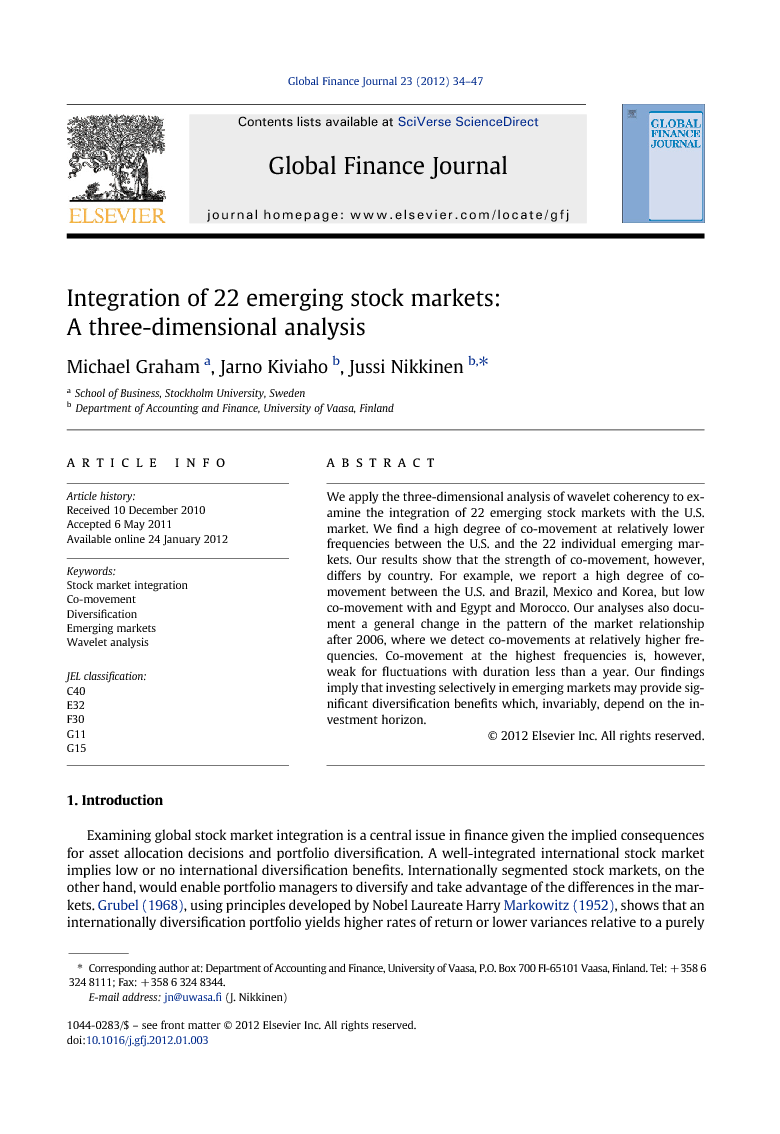 We apply the three-dimensional analysis of wavelet coherency to examine the integration of 22 emerging stock markets with the U.S. market. We find a high degree of co-movement at relatively lower frequencies between the U.S. and the 22 individual emerging markets. Our results show that the strength of co-movement, however, differs by country. For example, we report a high degree of co-movement between the U.S. and Brazil, Mexico and Korea, but low co-movement with and Egypt and Morocco. Our analyses also document a general change in the pattern of the market relationship after 2006, where we detect co-movements at relatively higher frequencies. Co-movement at the highest frequencies is, however, weak for fluctuations with duration less than a year. Our findings imply that investing selectively in emerging markets may provide significant diversification benefits which, invariably, depend on the investment horizon.

The assessment of the co-movements of stock returns in global equity markets is important in asset allocation and risk management. In this paper we re-assess the integration of 22 emerging stock markets located in the Americas, Europe, Asia and Middle East/Africa with the U.S. market by utilizing the powerful wavelet analysis tool. The study is of interest because it is now a stylized fact that the degree of co-movement in stock returns changes over time and a distinction must be made between the short term and the long term investor. Wavelet coherency allows for the examination of the time-and-frequency varying co-movements of stock markets within a unified framework. Generally, we find that the co-movements of stock market returns between the U.S and emerging regions occur for low frequencies (long-term fluctuations). The strength of the co-movement, however, varies by country. An important implication of our findings is that, consistent with prior literature, the degree of stock market integration is changing over time. We detect a consistent change in the pattern of the relationship for all stock market pairs after 2006 where we note co-movements at relatively higher frequencies from prior frequency levels. Consequently, the co-movement of U.S. stock returns with emerging capital markets also reflects the documented time-varying characteristics of global equity markets. Interestingly, the change in co-movement to relatively higher frequencies coincides with the onset on the current global financial crisis. The temporal instability of correlation coefficients over time could result in structural breaks in the asset price series when there are external shocks like financial crises. It may be that the co-movement at relatively higher frequencies after 2006 reflects new stock market relationship during and after the economic shock. Co-movement is, however, weaker for fluctuations with duration less than a year at the highest frequencies. From a risk management point of view, we infer from our evidence that it would be beneficial for U.S. investors to invest in emerging markets, especially for short-term investment horizons. Although some recent studies suggest that the co-movement in global equity markets may have increased over time, some short-term diversification benefits are still apparent.