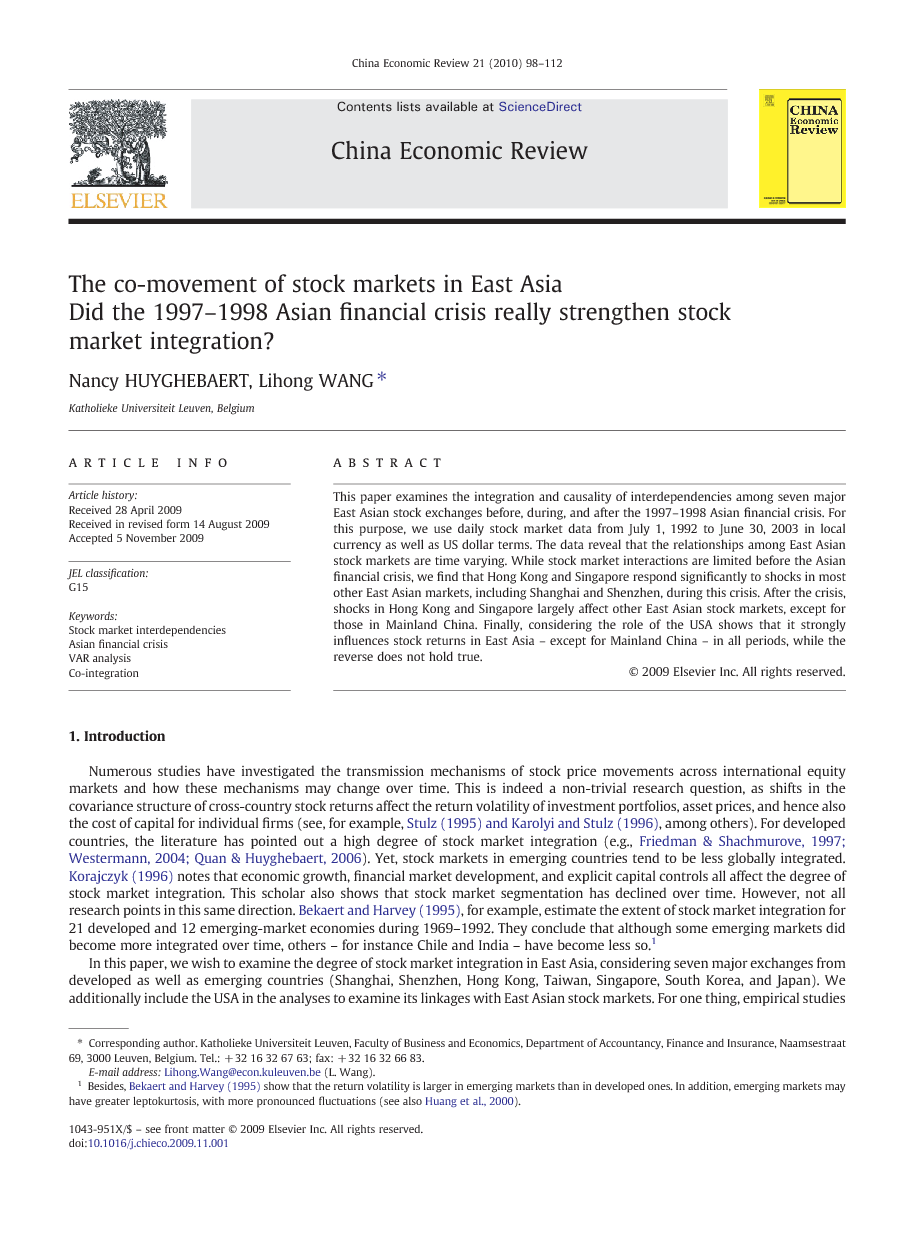 This paper examines the integration and causality of interdependencies among seven major East Asian stock exchanges before, during, and after the 1997–1998 Asian financial crisis. For this purpose, we use daily stock market data from July 1, 1992 to June 30, 2003 in local currency as well as US dollar terms. The data reveal that the relationships among East Asian stock markets are time varying. While stock market interactions are limited before the Asian financial crisis, we find that Hong Kong and Singapore respond significantly to shocks in most other East Asian markets, including Shanghai and Shenzhen, during this crisis. After the crisis, shocks in Hong Kong and Singapore largely affect other East Asian stock markets, except for those in Mainland China. Finally, considering the role of the USA shows that it strongly influences stock returns in East Asia – except for Mainland China – in all periods, while the reverse does not hold true.

This paper examines the long-run and short-term causal relationships among seven major stock exchanges in East Asia, while also considering their interactions with the USA. We build multivariate VAR models to examine the degree of integration among these stock markets. Thereby, we pay special attention to the effects that the 1997–1998 Asian financial crisis has engendered. We first run co-integration tests to figure out whether a long-run equilibrium relationship(s) exists among the sample markets before, during, and after this crisis. Thereafter, we implement Granger causality tests to examine their time-varying lead–lag relationships. Finally, we conduct generalized impulse response analyses to decide on the short-term causal relationships in the different subperiods. The above analyses all use daily data in local currencies as well as in US dollars, revealing that the denominating currency is only of minor importance. We find that before the 1997–1998 Asian financial crisis, stock markets in East Asia – except for Shanghai and Shenzhen – generally respond to worldwide shocks; regional innovations indeed have only a limited effect on stock prices. Yet, the Asian financial crisis has strengthened the linkages among stock markets in East Asia, except for those in Mainland China. However, this outcome turns out to be only a temporary phenomenon, thereby pointing out that the increased interdependencies during the crisis likely result from a market contagion effect. Also, East Asian stock markets do not always react in a very efficient manner to shocks during this period, as a one unit shock in one market sometimes leads to a response that spans several days in another market. Our results further demonstrate that the Hong Kong and Singaporean stock markets play an important role in spreading the crisis in East Asia and in the world. In more recent years, stock market integration has strengthened again. Yet, unlike Yang et al. (2003), our results do not support the idea that stock markets are co-integrated as of the 1997–1998 Asian financial crisis. Also, China's stock market isolation remains, despite its huge economic growth and financial market development. The influence of the Hong Kong stock market – which was substantial during the crisis – has declined somewhat over time, while interdependencies among other East Asian stock markets have become more eminent. More recently, the Singaporean stock market has become at least as important as that in Hong Kong. While the influence of Japan has increased over time, our results do not support a leading role for Japan in the region. Shocks in Hong Kong, Singapore, and Japan do have a significant effect on share prices in Taiwan and especially South Korea, whereas the latter markets still hardly affect the other East Asian stock markets in our sample. Besides, US stock market returns help to explain returns in East Asia – except in Mainland China – and vice versa. We do have to point out that the latter relation, although increased over time, is still relatively small in magnitude. Arguably, our results stress an enhanced integration of capital markets in East Asia, with each other and with the USA, which is in line with the stronger macro-economic linkages among countries worldwide.