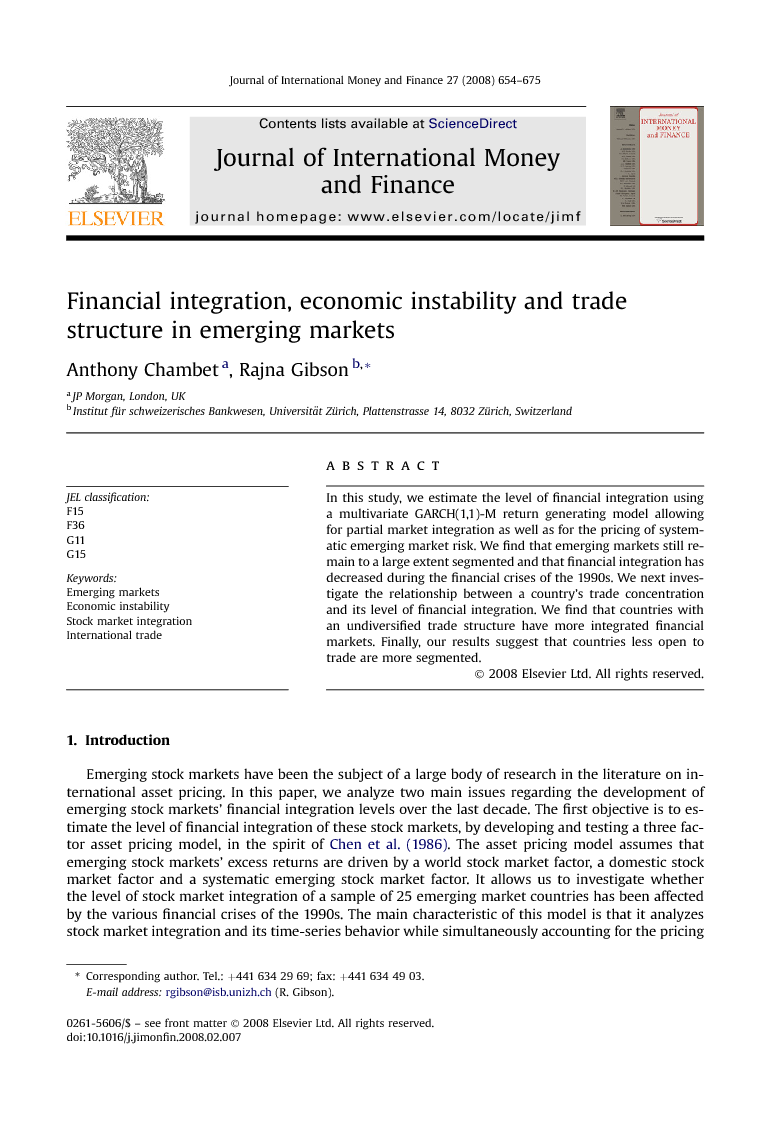 In this paper, we first study the behavior of emerging markets' excess stock returns in a multi-factor model that takes into account potential market segmentation as well as emerging markets' systematic risk. For that purpose, we propose and estimate a multivariate GARCH(1,1)-in-mean excess stock returns' generating model which allows for the pricing of time-varying domestic and world stock market risks as well as for the pricing of a time-varying non-diversifiable emerging market risk reflecting these countries' level of economic instability. Our second contribution is to study the impact of the trade structure of emerging economies on the evolution of the time-varying levels of financial integration generated by our empirical model. Our empirical results lead to the following conclusions. First, we find that emerging stock markets remained partially segmented during the 1990s. Our model generates levels of stock market integration that typically range between 13% (Morocco) and 55% (Mexico) for 25 countries under study over the period extending from January 1st, 1995 to June 30th, 2004. Second, we find that non-diversifiable emerging market risk is significantly priced. This reflects investors' concerns about emerging countries' level of economic instability. This emerging markets' risk premium is non-negligible, representing on average 20.25% of the total risk premium demanded by investors to hold emerging markets' stocks. Third, the level of integration as well as the unitary risk premia are found to be time-varying over the sample period, which is consistent with previous results in the empirical finance literature, see, for instance, Bekaert and Harvey (1995). Fourth, we find that during the financial crises of the 1990s, the levels of financial integration in emerging markets dropped sharply, well beyond Asian countries, but recovered quickly afterwards. In the second part of the study, we investigate whether the structure of emerging economies trade policies influences the observed evolution of their levels of financial integration. After having decomposed a measure of countries' trade openness into its natural and residual components, we observe that these two trade openness variables positively contribute to stock market integration. These empirical results shed new light on the relationship between trade openness and financial integration by suggesting that these two development factors are complementary rather than substitutes. However, we go one step further in characterizing emerging markets' trade policies and show that the structure of international trade matters too: countries that are less diversified with respect to their foreign trade partners policy have more integrated stock markets. In other words, we find evidence of a substitution effect between trade partner concentration and stock market integration. We explain this relationship based on the historical bilateral development of goods trade and by the fact that it is less costly – given technological progress in securities trading mechanisms, in particular – for countries to engage in the multilateral trading of financial securities. These results could be extended in several ways. It would be interesting to examine whether the relationship between the structure of foreign trade partner and financial integration also extends to developed stock markets. Furthermore, exchange rate uncertainty could also be introduced in the model given the extreme sensitivity of international trade to currency fluctuations. Finally, the positive relationship between trade partner concentration and financial integration documented in our study deserves further conceptual grounding as far as its causes and policy implications are concerned.