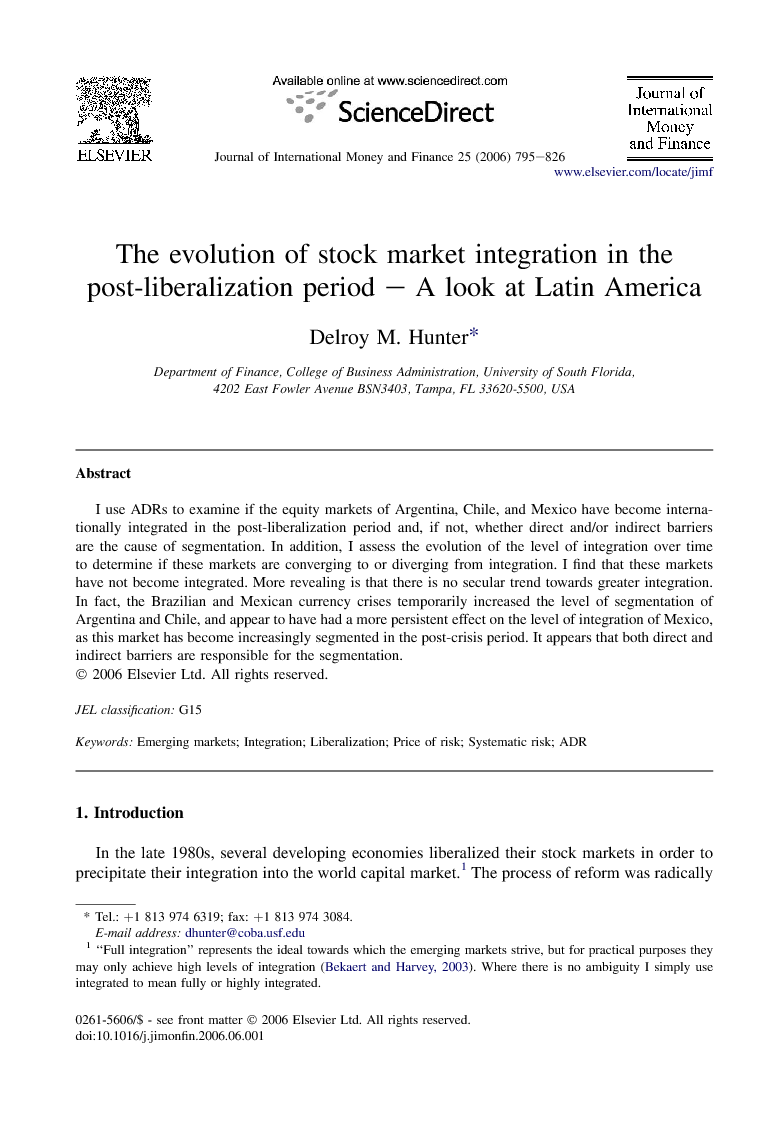 I use ADRs to examine if the equity markets of Argentina, Chile, and Mexico have become internationally integrated in the post-liberalization period and, if not, whether direct and/or indirect barriers are the cause of segmentation. In addition, I assess the evolution of the level of integration over time to determine if these markets are converging to or diverging from integration. I find that these markets have not become integrated. More revealing is that there is no secular trend towards greater integration. In fact, the Brazilian and Mexican currency crises temporarily increased the level of segmentation of Argentina and Chile, and appear to have had a more persistent effect on the level of integration of Mexico, as this market has become increasingly segmented in the post-crisis period. It appears that both direct and indirect barriers are responsible for the segmentation.

In this paper, I use ADRs to examine if the equity markets of Argentina, Chile, and Mexico have become integrated into the world equity market in the decade after liberalization and, if not, whether direct and/or indirect barriers are the cause of segmentation. In addition, I assess the evolution of the level of integration of these markets over the post-liberalization period to determine if they are converging to or diverging from integration. The test is based on the null hypothesis that if the markets are integrated, then the prices of systematic risks of portfolios of the region's ADRs are the same as the risk prices of the U.S. market portfolio. I find that liberalization has not successfully led to a high and sustained level of integration of these Latin American markets into the international capital market. This is unlike the experience of industrialized markets such as Canada (Mittoo, 1992), Germany and the U.K. (Cumby, 1990), and Japan. For instance, Japan became fully integrated with the U.S. within five years after opening up their market through the implementation of the Foreign Exchange Law in 1980 (Gultekin et al., 1989 and Campbell and Hamao, 1992). However, despite the failure of liberalization to lead to full integration, the emerging markets, as a whole, have experienced a small increase in economic growth rates (Bekaert et al., 2001), a small reduction in the cost of capital (Bekaert and Harvey, 2000), a temporary rise in stock prices (Henry, 2000a), and a short-term increase in private physical investments (Henry, 2000b) as a result of liberalization. Unfortunately, these benefits are not as significant as expected, prompting Bekaert and Harvey (2000, p. 601) to proclaim that the reduction in the cost of capital is “… less than we expected.” The results also indicate that there is no tendency towards an increase in the level of integration over the sample period and that the level of integration in all three markets is negatively affected by currency crises. In fact, Mexico has become less integrated following the peso crash of December 1994. Further, it appears that though many government-imposed impediments and other barriers have been lifted, there are remaining binding direct and indirect barriers. The results have implications for foreign investors seeking international portfolio diversification by investing in the emerging markets. Foreign investors must be cognizant of the fact that these markets have evolved to the point where the pricing of their securities is substantially influenced by international factors. However, that they are segmented suggests that they continue to be influenced also by local factors. Additionally, emerging and transitional economies contemplating opening their markets to foreign investors for the first time are to be aware that liberalization does not necessarily lead to full integration and its potential benefits. Moreover, when currency crises occur they negatively affect the level of integration. It appears that the type of exchange rate regime is immaterial, as the level of integration of markets with fixed and floating rate regimes is affected by these crises. This raises the issue of whether or not the increased inflow of capital following liberalization is worth the potential devastation of currency crises. No doubt this will be the subject of future studies.