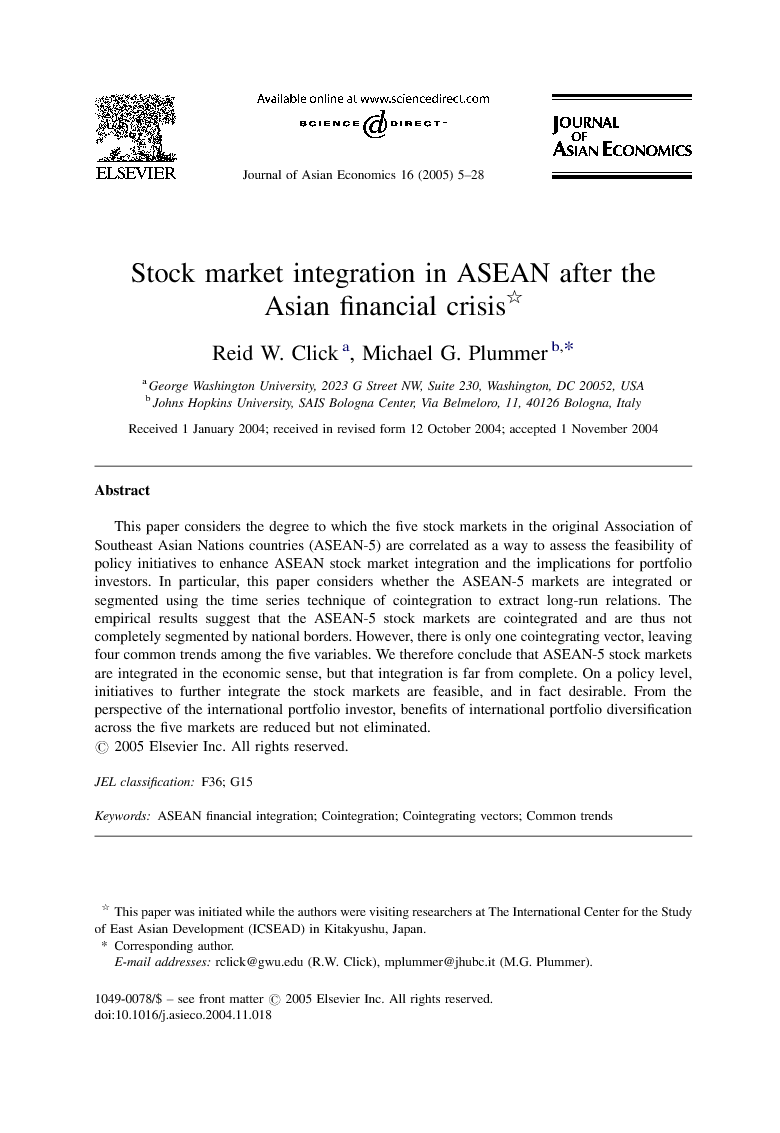 This paper considers the degree to which the five stock markets in the original Association of Southeast Asian Nations countries (ASEAN-5) are correlated as a way to assess the feasibility of policy initiatives to enhance ASEAN stock market integration and the implications for portfolio investors. In particular, this paper considers whether the ASEAN-5 markets are integrated or segmented using the time series technique of cointegration to extract long-run relations. The empirical results suggest that the ASEAN-5 stock markets are cointegrated and are thus not completely segmented by national borders. However, there is only one cointegrating vector, leaving four common trends among the five variables. We therefore conclude that ASEAN-5 stock markets are integrated in the economic sense, but that integration is far from complete. On a policy level, initiatives to further integrate the stock markets are feasible, and in fact desirable. From the perspective of the international portfolio investor, benefits of international portfolio diversification across the five markets are reduced but not eliminated.

The empirical results in this paper demonstrate that the stock markets of Indonesia, Malaysia, Philippines, Singapore, and Thailand in the period after the Asian financial crisis (July 1, 1998 through December 31, 2002) are cointegrated whether analyzed using daily data or weekly data, and whether analyzed in local currencies, the US dollar, or the Japanese yen. In addition, the finding does not depend on the number of lags used in estimation over a reasonable range. The stock markets are thus not completely segmented by national borders. However, there is only one cointegrating vector among the five stock markets, leaving four common trends among the five variables. We therefore conclude that ASEAN-5 stock markets are integrated in the economic sense, but that integration is not complete. Exclusion tests of the variables suggest that each country index participates in the long-run cointegrating vector, so no market should be removed from the analysis. In addition, the coefficients in the cointegrating vector are remarkably similar across all versions of the models, and are reasonable in magnitude and interpretation. One implication of cointegration is that there is less long-run diversification benefit from investing in all five countries than the short-run correlation coefficients indicate. On a policy level, cointegration suggests that initiatives to further integrate the stock markets are quite feasible, and in fact desirable from the standpoint of efficiency. In particular, since there is less long-run diversification benefit from investing across all five countries, a regional stock exchange will nudge investors to spread their money into smaller markets where they otherwise may not. In fact, investors from outside the region may value the benefits of a regional stock exchange (such as higher liquidity and lower transaction costs) and allocate more capital to the region than they otherwise would. This will allow ASEAN companies to expand their shareholder base and lower their cost of capital. From the stock market perspective, regional integration suggests that even currency unification would be feasible. Although this issue needs to consider other financial and macroeconomic issues as well,15 the point here is that efficient flows of capital across borders within the region have the capacity to mitigate the effects of any asymmetric macroeconomic shocks. The inverse relationships in cointegrating vectors among some stock market pairs suggest that such cross-border flows are already occurring. Stock market integration is thus an important component of overall economic integration and might be a useful precondition for monetary unification.