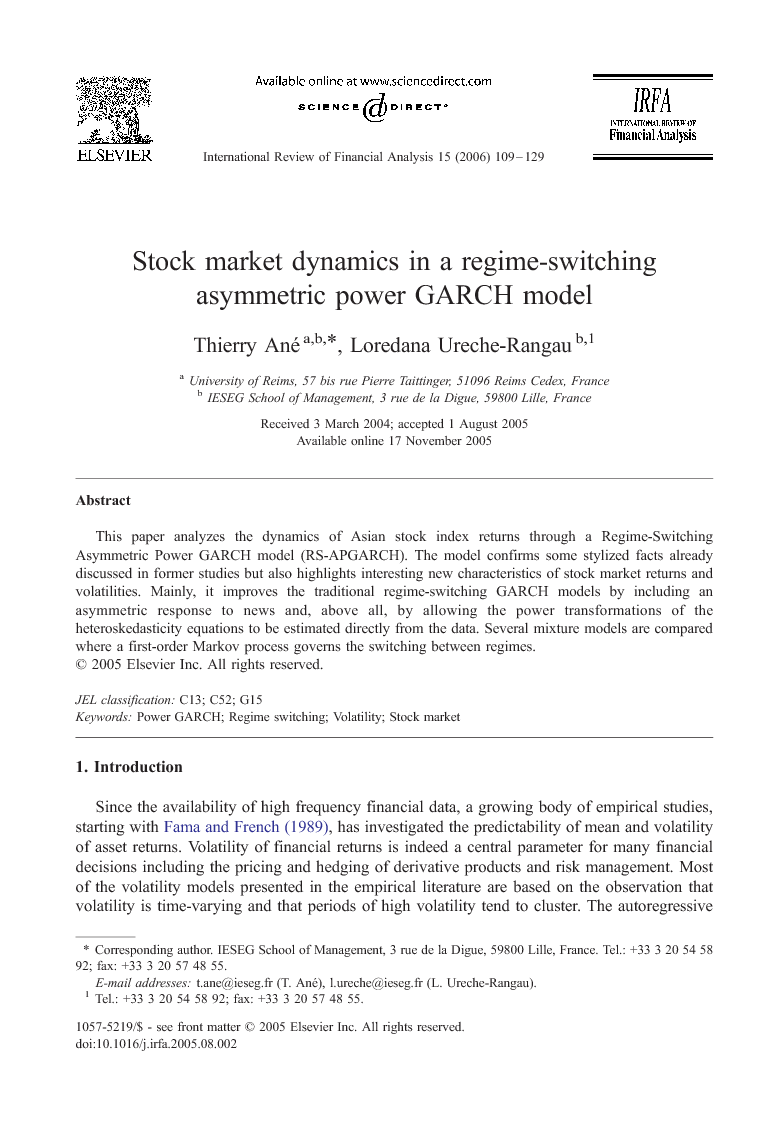 This paper analyzes the dynamics of Asian stock index returns through a Regime-Switching Asymmetric Power GARCH model (RS-APGARCH). The model confirms some stylized facts already discussed in former studies but also highlights interesting new characteristics of stock market returns and volatilities. Mainly, it improves the traditional regime-switching GARCH models by including an asymmetric response to news and, above all, by allowing the power transformations of the heteroskedasticity equations to be estimated directly from the data. Several mixture models are compared where a first-order Markov process governs the switching between regimes.

This paper develops a new general class of regime-switching models called Regime-Switching Asymmetric Power GARCH model. It allows a free power term for the GARCH specification of each regime rather than assuming an absolute or squared term like most of the classical models. Since this type of APGARCH model has not yet been considered in a regime switching context, an important contribution of the current paper is to augment our understanding of whether and to what extent these types of more flexible models are statistically superior to their less sophisticated counterparts. The empirical investigation uses four Asian stock market indices corresponding to various market situations and provides interesting conclusions about how to understand time variations in stock index returns. Most obviously, it seems that commonly used single-state specifications for stock index returns that adopt the same model for recessions and expansions are misspecified and can be strongly rejected against a two-state model. We also find that the APGARCH structure provides a considerable improvement over the classical GARCH structure in both regimes. The empirical results do indicate that all generalizations brought by our model are statistically and economically significant. More specifically, a variety of new stylized facts about the dynamics of stock index returns has emerged from this RS-APGARCH model. We first recover, but with a higher level of significance however, a now classical result of the regime-switching literature: one regime could be regarded as modeling expansion periods while the second regime is clearly identified to recessions. Expansions are characterized by a positive conditional mean and a low-volatility regime while recessions exhibit a negative conditional mean and are always synonym of a much higher volatility level. Even if a basic regime-switching model with constant parameters would result in a leptokurtic process, we tried several conditional distributions for each regime to investigate the within-regime level of leptokurtosicity. The classical conditional Gaussian densities are shown not to be sufficient, even in a two-state framework, to incorporate all the kurtosis of the underlying series. We find that, whatever the investigated stock market index, both regimes are best modeled with a conditional Student-t distribution. However, we do recover, to some extent, the interesting result obtained by Perez-Quiros and Timmermann (2001) on U.S. stock returns using a mixture of Gaussian and Student-t densities. Indeed, it seems that for developed markets, the estimated degree of freedom of one Student-t distribution is large enough to statistically accept the convergence to conditional normality in this regime. The second regime, however, exhibits a strong leptokurtosicity and captures all extreme returns. Presenting both developed and emerging markets in this study, we are able to refine the result. Indeed, the “convergence” of one regime to normality is not obtained for emerging markets where the level of leptokurtosicity remains very strong and even comparable for recession and expansion cycles. This result should of course be tested on a larger sample of stock market indices. If it were confirmed, this would indicate that the degree of leptokurtosicity of the regime representing the good market condition (expansions) could be used to assess the level of development of a financial market. The RS-APGARCH model also introduces the possibility of within-regime asymmetric response to news. It is found that the introduction of such parameters is strongly significant and that asymmetries are important in both states of the economy. Although the classical leverage effect of stock market returns is obtained for both regimes, the asymmetric response to news is consistently stronger in the low-volatility regime. Market participants thus seem to differentiate less between good and bad news during extremely volatile periods. The unusually high level of volatility in the latter periods could bias the market participants perception of news and reduce their ability of differentiating between good and bad news. When markets evolve more smoothly, however, the information process may be less noisy and market participants may recover their ability to assess the content of new information and to react accordingly. If confirmed by other empirical studies, this result should open a challenging avenue of research for microstructure models of agent behavior and price formation in financial markets. Moreover, the improvements of the RS-APGARCH model are mainly due to the endogenous determination of the power transformation term used in the GARCH structure of each regime. Using Gray's RS-GARCH model, we find that the within-regime volatility persistence is consequently reduced relative to the single-state GARCH model. Such result gives credit to Lamoureux and Lastrapes (1990) thesis that structural breaks account for most of the volatility persistence observed with a single-state model through the regime persistence (very high P and Q). When the power GARCH term is introduced, however, we observe that not only the ARCH and GARCH parameters become statistically much more significant, but also that the within-regime heteroskedasticity increases strongly compared to the RS-GARCH level. This seems to indicate that the squared terms arbitrarily used in the traditional RS-GARCH models are sub-optimal and do not allow to fully capture the within-regime clustering effects. Lastly, as explained in Ding and Granger (1996) the APGARCH class of model we use on both regimes has no memory in return themselves, but long memory in absolute returns and their power transformations. The estimated power terms δst are significant and different in both regimes, implying the existence of long memory in both states of the economy. Again, this shows that the existing long memory in stock returns does not only result from structural breaks as it has often been argued in the single-state literature: we do find the existence of within-regime long memory. Nevertheless, the values of δst obtained for all stock indices are too close from one regime to the other to conclude that one regime predominantly captures short-run dependencies while the other regime exhibits long memory.