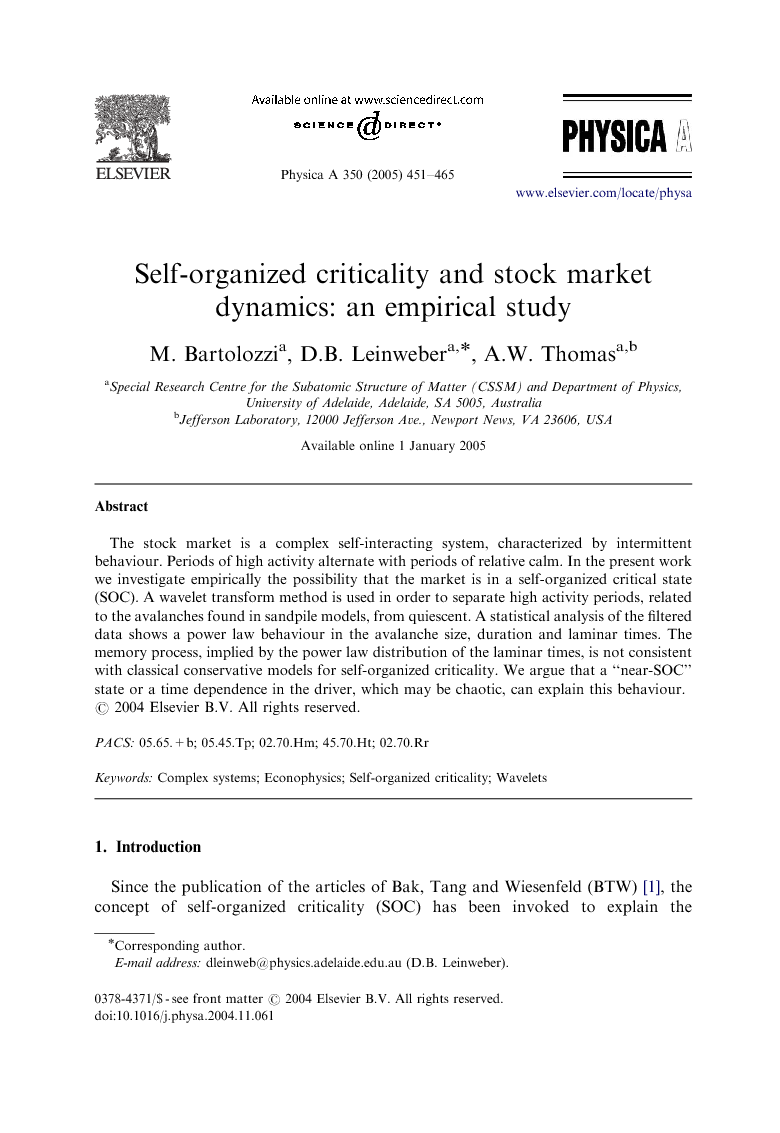 The stock market is a complex self-interacting system, characterized by intermittent behaviour. Periods of high activity alternate with periods of relative calm. In the present work we investigate empirically the possibility that the market is in a self-organized critical state (SOC). A wavelet transform method is used in order to separate high activity periods, related to the avalanches found in sandpile models, from quiescent. A statistical analysis of the filtered data shows a power law behaviour in the avalanche size, duration and laminar times. The memory process, implied by the power law distribution of the laminar times, is not consistent with classical conservative models for self-organized criticality. We argue that a “near-SOC” state or a time dependence in the driver, which may be chaotic, can explain this behaviour.

Since the publication of the articles of Bak, Tang and Wiesenfeld (BTW) [1], the concept of self-organized criticality (SOC) has been invoked to explain the dynamical behaviour of many complex systems, from physics to biology and the social sciences [2] and [3]. The key concept of SOC is that complex systems, that is systems constituted by many interacting elements, although obeying different microscopic physics, may exhibit similar dynamical behaviour. In particular, the statistical properties of these systems can be described by power laws, reflecting a lack of any characteristic scale. These features are equivalent to those of physical systems during a phase transition, that is at the critical point. It is worth emphasizing that the original idea [1] was that the critical state was reached “naturally”, without any external tuning. This is the origin of the adjective self-organized. In reality a certain degree of tuning is necessary: implicit tunings like local conservation laws and specific boundary conditions seem to be important ingredients for the appearance of power laws [2]. The classical example of a system exhibiting SOC behaviour is the 2D sandpile model [1], [2] and [3]. Here the cells of a grid are randomly filled, by an external random driver, with “sand”. When the gradient between two adjacent cells exceeds a certain threshold a redistribution of the sand occurs, leading to more instabilities and further redistributions. The benchmark of this system, indeed of all systems exhibiting SOC, is that the distribution of the avalanche sizes, their duration and the energy released, obey power laws. The framework of self-organized criticality has been claimed to play an important role in solar flaring [4], space plasmas [5] and earthquakes [6] in the context of both astrophysics and geophysics. In the biological sciences, SOC, has been related, for example, with biodiversity and evolution/extinction [7]. Some work has also been carried out in the social sciences. In particular, traffic flow and traffic jams [8], wars [9] and stock-market [3], [10], [11] and [12] dynamics have been studied. A more detailed list of subjects and references related to SOC can be found in the review paper of Turcotte [3]. In the present work we will provide empirical evidence for connections between self-organized criticality and the stock market, considered as a complex system constituted of many interacting individuals. We analyze the tick-by-tick behaviour of the Nasdaq100 index, P(t)P(t), from 21/6/1999 to 19/6/2002 for a total of 219219 data. A sample of this data is illustrated in Fig. 1(a). In particular, we study the logarithmic returns of this index, which are defined as R(t)=ln(P(t+1))-ln(P(t))R(t)=ln(P(t+1))-ln(P(t)) and plotted in Fig. 1(b). Full-size image (29 K) Fig. 1. Sample of the tick-by-tick time series of the Nasdaq100 (a), as well as the corresponding returns (b). Figure options To examine the extent to which our findings apply to other stock market indices we also studied the S&P ASX50 (for the Australian stock market) at intervals of 30 min over the period 20/1/1998 to 1/5/2002, for a total of 214214 data points. Possible differences between daily and high-frequency data have also been taken into consideration though the analysis of the Dow Jones daily closures from 2/2/1939 to 13/4/2004. The results are presented in Section 3. From a visual analysis of the time series of returns, Fig. 1(b), we observe long periods of relative tranquility, characterized by small fluctuations, and periods in which the index goes through very large fluctuations, equivalent to avalanches, clustered in relatively short time intervals. These may be viewed as a consequence of a build-up process leading the system to an extremely unstable state. Once this critical point has been reached, any small fluctuation can, in principle, trigger a chain reaction, similar to an avalanche, which is needed to stabilize the system again.

In the present work we have investigated empirically the possible relations between the theory of self-organized criticality and the stock market. The existence of a SOC state for the market would be of great theoretical importance, as this would impose some constraints on the dynamics of this complex system. A bounded attractor in the state space would be implied. Moreover, we would have a better understanding of business cycles. From the wavelet analysis on a sample of high-frequency data for the Nasdaq100 index, we have found that the behaviour of high activity periods, or avalanches, is characterized by power laws in the size, duration and laminar times. The power laws in the avalanche size and duration are a characteristic feature of a critical underlying dynamics in the system, but this is not enough to claim the self-organized critical state. In fact, the power law behaviour in the laminar time distribution implies a memory process in the triggering driver that is absent in the classical BTW models, where an exponential behaviour is expected. This does not rule out completely the hypothesis of underlying self-organized critical dynamics in the market. Non-conservative systems, as for the case of the stock market, near the SOC state can still show power law dynamics even in presence of temporal correlations of the avalanches [28] and [33]. Another possible explanation is that the memory process, possibly chaotic, is intrinsic in the driver. In this case the power law behaviour of the waiting time distribution would be explained and the realization of a SOC state preserved [34] and [35]. These findings extend beyond the Nasdaq100 index analysis. A similar quantitative behaviour has been observed in the S&P ASX50 high-frequency data for the Australian market and the daily closures of the Dow Jones index for the American market. At this point it is important to stress that this does not imply that all the markets must display the same identical characteristics. In the case of a near-SOC dynamics, for example, the power law shape of the distribution can be influenced by the degree of dissipation of the system which may change from market to market, implying a non-universal behaviour. In conclusion, a definitive relation between SOC theory and the stock market has not been found. Rather, we have shown that a memory process is related with periods of high activity. The memory could result from some kind of dissipation of information, similar to turbulence, or possibly a chaotic driver applied to the self-organized critical system. Of course, a combination of the two processes can also be possible. Our future work will be devoted to the study of new tests for self-organized criticality and the implementation of numerical models [36].