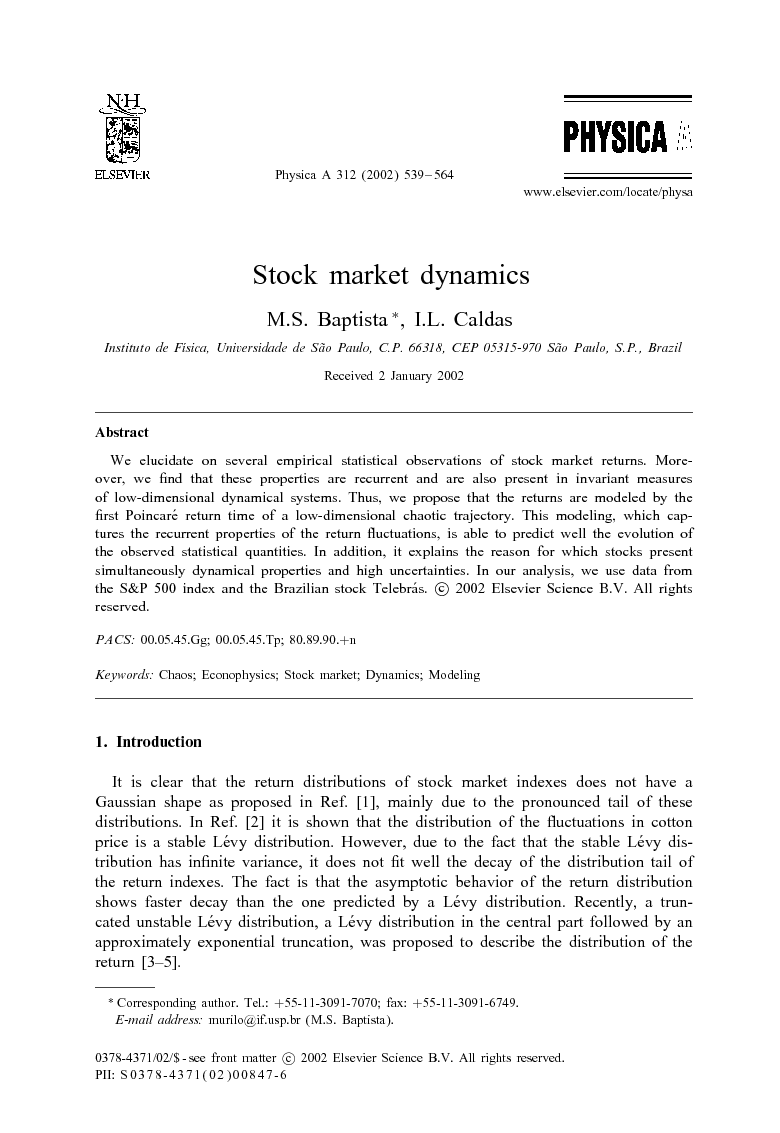 We elucidate on several empirical statistical observations of stock market returns. Moreover, we find that these properties are recurrent and are also present in invariant measures of low-dimensional dynamical systems. Thus, we propose that the returns are modeled by the first Poincaré return time of a low-dimensional chaotic trajectory. This modeling, which captures the recurrent properties of the return fluctuations, is able to predict well the evolution of the observed statistical quantities. In addition, it explains the reason for which stocks present simultaneously dynamical properties and high uncertainties. In our analysis, we use data from the S&P 500 index and the Brazilian stock Telebrás.

We demonstrate that several empirical statistical evidences observed in the stock market are also present in the first Poincaré return time of a low-dimensional trajectory. Therefore, this dynamical measurement can be used as the basis of a model for the stock market return. As important as describing the distribution of the return index Rn properly, there is a need to understand more the variations of the average quantities 〈Rn〉 and 〈Rn+〉 with respect to the observation time τ. In case these variations are almost constant, 〈Rn〉 should scale with τ following a linear law, as described by Eq. (30). We showed that there is an equivalence between the temporal measures, the return Rn, and spacial measures, the recurrent time of the return, Tn. This means information on the recurrent cycles of stocks in the stock market gives information on the volatility of this same stock, and vice versa. This equivalence was proven to exist in dynamical systems that are typically “fully” chaotic (as it is the case for Eq. (13)). For a system to be “fully” chaotic, there must exist a homoclinic or heteroclinic orbit in the surroundings of the chaotic set. Also, by “fully” one can think of a dynamics at the chaos-stochastic border, where the dynamical system behaves either as a chaotic or as a stochastic system. Therefore, if this proposed model describes correctly the stock market dynamics, a stock fluctuation should have some statistical properties similar to those observed in randomic fluctuations. We could relate the average time interval that we expect some return value to be observed with respect to the average return (volatility) of the index. This theoretical observation, also observed to happen in the stock market, guide us on how much time one should keep some stock in order to obtain some desired gain. This equation, in fact, can be seen as a test for the existence of properties in the data as observed in dynamically recurrent oscillation. In [29] and [30] the common characteristics of the stock market oscillations with turbulence are proposed. We also found that the empirical observations (i,ii,iv,vii,viii,ix) described in this work are also present in edge turbulence of tokamak plasma [11]. Therefore, we believe the empirical properties, explained to be common of chaotic dynamical systems, could be seen as a set of characteristics to turbulence. In Ref. [6] it is argued that the scaling behavior observed in the distribution of the returns may be connected to the slow decay of the volatility correlations. We do not disagree with this affirmation, but we prefer to emphasize that the scaling behavior is connected to the variations of the averages of the return (tendency) and the variation of the amplitude of the returns (volatility) with time. One example of this is based on a peculiar observation regarding differences in the scaling laws of the average amplitude of the recurrent time, and the amplitude variation of the return with respect to time. The difference is that the recurrent time has a linear scaling law (very small linear correlation decay) and the return has a power-scaling law. This difference is due to the fact that the recurrent time is not affected by time variations of the averages of the return (tendency) and the variation of the amplitude of the returns (volatility) with time. Any stock that verify the empirical properties described in this work should be a candidate to have its dynamics modeled by the proposed model. So, this model is not limited to a specific stock market of any country.