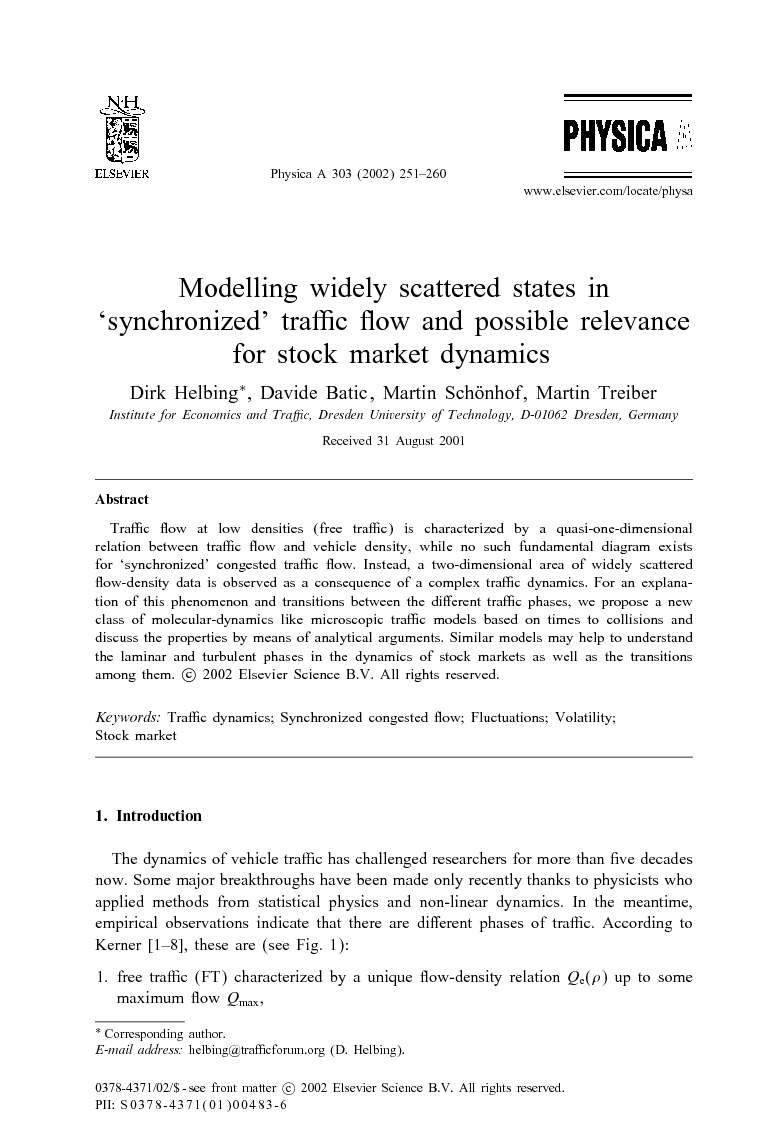 Traffic flow at low densities (free traffic) is characterized by a quasi-one-dimensional relation between traffic flow and vehicle density, while no such fundamental diagram exists for ‘synchronized’ congested traffic flow. Instead, a two-dimensional area of widely scattered flow-density data is observed as a consequence of a complex traffic dynamics. For an explanation of this phenomenon and transitions between the different traffic phases, we propose a new class of molecular-dynamics like microscopic traffic models based on times to collisions and discuss the properties by means of analytical arguments. Similar models may help to understand the laminar and turbulent phases in the dynamics of stock markets as well as the transitions among them.

The dynamics of vehicle traffic has challenged researchers for more than five decades now. Some major breakthroughs have been made only recently thanks to physicists who applied methods from statistical physics and non-linear dynamics. In the meantime, empirical observations indicate that there are different phases of traffic. According to Kerner [1], [2], [3], [4], [5], [6], [7] and [8], these are (see Fig. 1): 1. free traffic (FT) characterized by a unique flow-density relation Qe(ρ) up to some maximum flow Qmax, 2. wide moving clusters (traffic jams) characterized by a jam line J(ρ) and ‘natural constants’ such as the propagation velocity C<0 and the outflow Qout<Qmax of wide clusters, and 3. ‘synchronized’ congested flow, characterized by a synchronization of average vehicle speeds among neighboring lanes and a wide scattering of flow-density data. Full-size image (7 K) Fig. 1. Schematic illustration of measurements of flow-density data (View the MathML source averages) after Kerner. Figure options Synchronized flow has three subtypes: (i) stationary and homogeneous states, (ii) oscillatory states, and (iii) homogeneous-in-speed states, where the velocity is constant, i.e., the flow is proportional to the density. While the transitions among these subtypes are continuous, the transitions between free traffic, wide moving jams, and synchronized flow are hysteretic in nature [4], [5], [6], [7] and [8]. Most simulation models show different traffic states as well [9], [10], [11], [12], [13] and [14]. Usually, one finds free and stable traffic at low densities. At higher densities, traffic is unstable in most models, which can give rise to emergent traffic jams due to the slow relaxation to some density-dependent equilibrium velocity Ve(ρ). The delayed adaptation leads to overbraking and chain reactions of the following drivers, finally resulting in a standstill of cars. In addition to traffic jams, these models can reproduce congested traffic states of homogeneous and oscillatory type behind bottlenecks reminding of ‘synchronized’ congested traffic of types (i) and (ii) [15] and [16]. The resulting state depends on the flow on the freeway and on the bottleneck strength, but it is also history dependent, as traffic flow can be multi-stable. Despite this success, some people believe that the observation of the wide scattering of congested flow-density data has not yet been fully understood. Many researchers in the field of traffic physics have, therefore, published their own theories of ‘synchronized’ flow, but none of them is generally accepted, and the on-going debate on this hot topic is still very controversial. The proposed explanations include mixtures of different vehicle types (cars and trucks) [17], a heterogeneity in the time headways [18], changes in the behavior of “frustrated” drivers [19], anticipation effects [20], [21] and [22], non-unique equilibrium solutions [23] and [24], and multiple metastable oscillating states [25]. Only the hypotheses of mixed vehicle types and heterogeneous time headways have been empirically supported. Here, we will suggest another approach to the subject, which is also empirically motivated. Although we presently do not share some of Kerner's interpretations of empirical observations and his criticism of the existing traffic models, this paper aims at developing a new class of models consistent with his interpretation of observed traffic data.