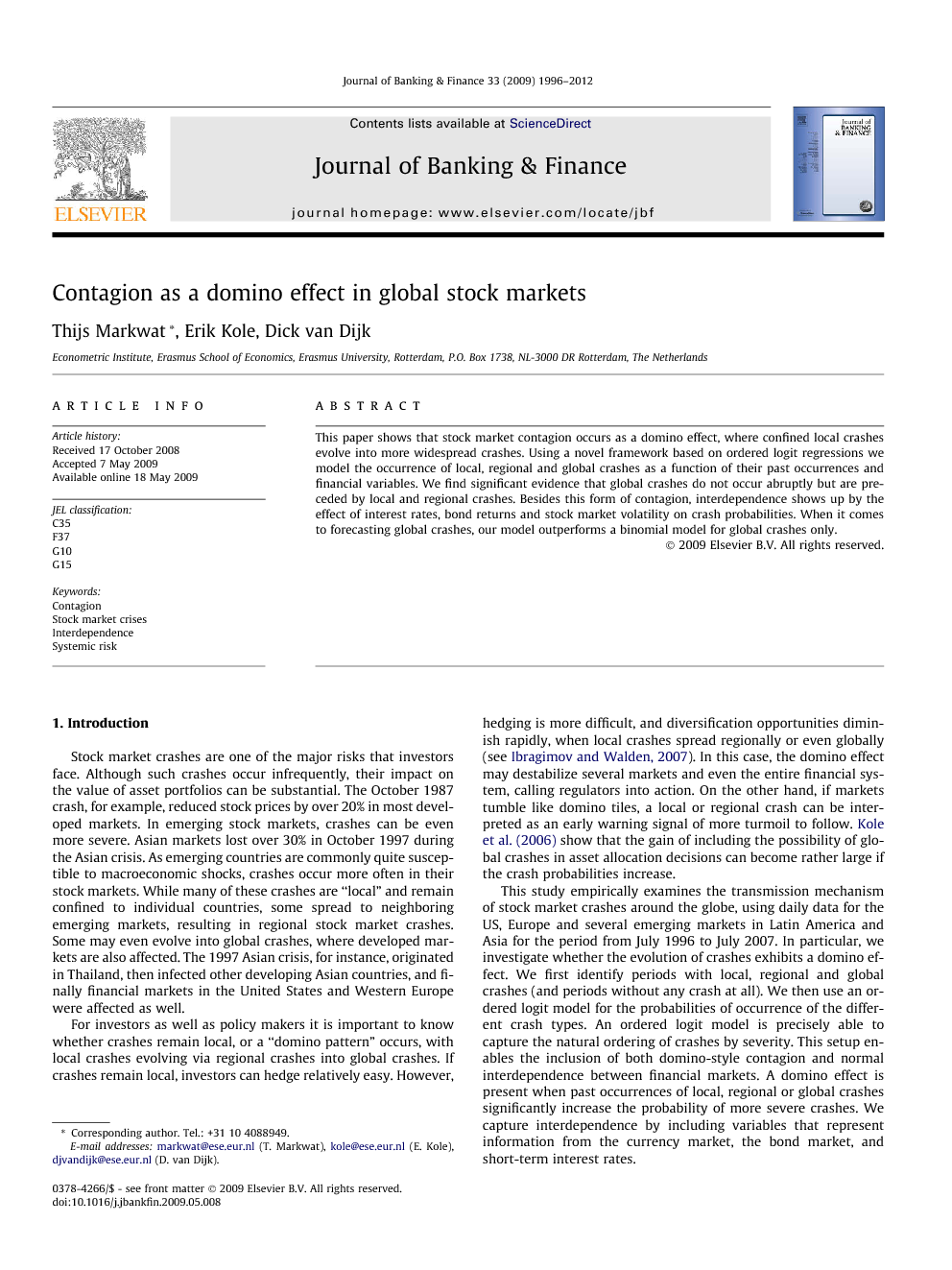 This paper shows that stock market contagion occurs as a domino effect, where confined local crashes evolve into more widespread crashes. Using a novel framework based on ordered logit regressions we model the occurrence of local, regional and global crashes as a function of their past occurrences and financial variables. We find significant evidence that global crashes do not occur abruptly but are preceded by local and regional crashes. Besides this form of contagion, interdependence shows up by the effect of interest rates, bond returns and stock market volatility on crash probabilities. When it comes to forecasting global crashes, our model outperforms a binomial model for global crashes only.

In this paper we have investigated whether stock market crashes propagate from local to regional and global levels as a domino effect. Using daily returns for a sample of emerging and developed stock markets for the period July 1996–July 2007, we classified crashes as local, regional or global. This classification was used in an ordered logit regression framework to examine the propagation of stock market crashes, and the relevance of interdependence and contagion effects. Our approach differs from other studies by explicitly defining different types of crashes, and modelling their transmission mechanism as a domino effect. We report evidence that less severe crashes tend to be followed by more severe crashes. The probabilities of a regional or global crash occurring tomorrow increase significantly and substantially when a local (or regional) crash occurs today. In explaining the occurrence and evolution of crashes we also find evidence for interdependence between stock markets and other asset markets. Information from the currency, stock and bond markets are important determinants of the probabilities of local, regional or global crash occurrences. Our out-of-sample analysis confirms the superiority of the ordered model that includes local and regional crashes in forecasting global crashes to a standard binomial model. The domino effect that we report holds an important lesson for investors and regulators. On the one hand, it stresses again the danger of contagion in financial markets, as it exists beyond dependencies and linear autocorrelation that dominate normal periods. On the other hand, the domino effect can be used to improve early-warning systems. Besides the statistical evidence for incorporating the domino effect, we also document its economic relevance. If failing to forecast global crashes is more costly than giving a false alarm, the ordered model with the domino effect outperforms the binomial model without it. If the false alarm rate should be kept at reasonable levels, to limit reputational damage for example, the ordered model does a better job as well. Concluding, because of their susceptibility to macroeconomic shocks, emerging markets can be the point of origin of an eventually global crash. Therefore, all investors and regulators should keep an eye on what happens in these markets, whether they are directly exposed to it or not.