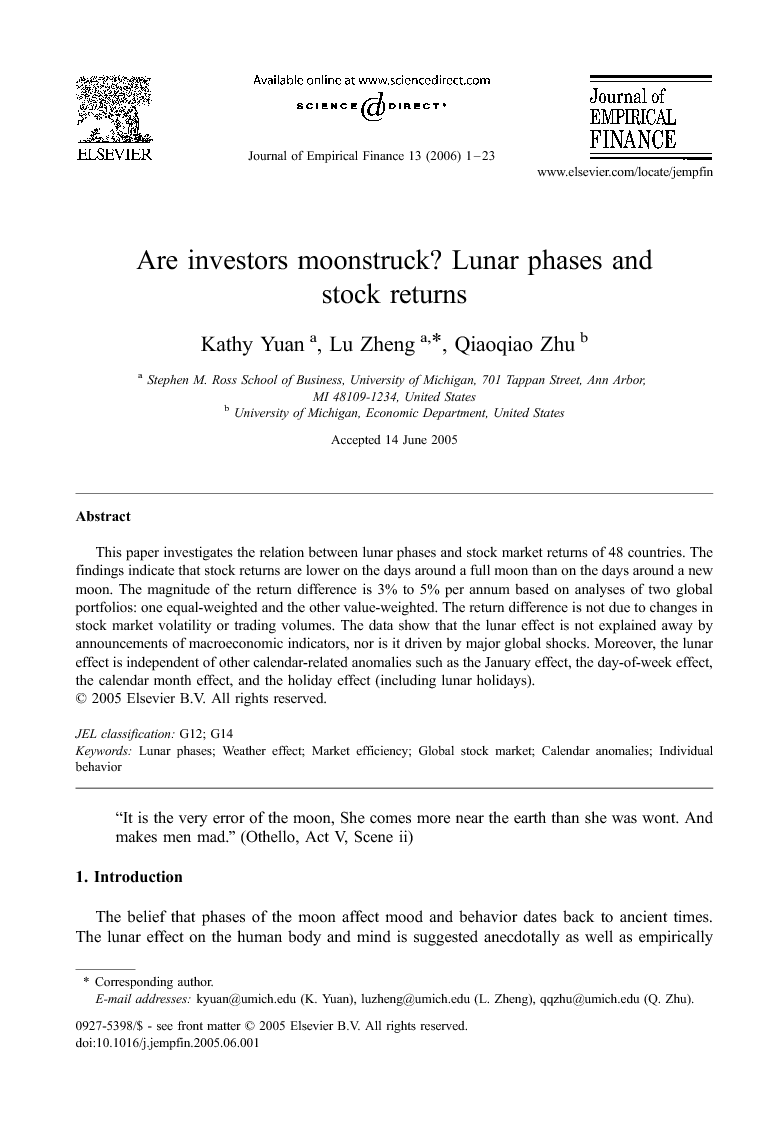 This paper investigates the relation between lunar phases and stock market returns of 48 countries. The findings indicate that stock returns are lower on the days around a full moon than on the days around a new moon. The magnitude of the return difference is 3% to 5% per annum based on analyses of two global portfolios: one equal-weighted and the other value-weighted. The return difference is not due to changes in stock market volatility or trading volumes. The data show that the lunar effect is not explained away by announcements of macroeconomic indicators, nor is it driven by major global shocks. Moreover, the lunar effect is independent of other calendar-related anomalies such as the January effect, the day-of-week effect, the calendar month effect, and the holiday effect (including lunar holidays).

This paper investigates the relation between lunar phases and stock returns for a sample of 48 countries. Strong global evidence indicates that stock returns are lower on days around a full moon than on days around a new moon. The return differences are statistically and economically significant during the sample period. Since lunar phases are likely to be related to investor mood and are not related to economic activities, the findings are thus not consistent with the predictions of traditional asset pricing theories that assume fully rational investors. The positive association identified between lunar phases and stock returns suggests that it might be valuable to go beyond a rational asset pricing framework to explore investor behavior. The psychology literature has provided numerous theories on how mood affects perceptions and preferences. One theory is that mood affects perception through misattribution: attributing feelings to wrong sources leads to incorrect judgments (Schwarz and Clore, 1983 and Frijda, 1988). Alternatively, mood may affect people's ability to process information. In particular, investors may react to salient or irrelevant information when feeling good (Schwarz, 1990 and Schwarz and Bless, 1991). Finally, mood may affect preferences (Loewenstein, 2000 and Mehra and Sah, 2000). This paper is a first step toward documenting the possible effect of mood on asset prices. It would be interesting to better understand how mood affects asset prices. In a survey paper, Hirshleifer (2001) pointed out that one area of future research is to conduct experimental testing of behavioral hypotheses. In a related vein, future work could study the effect of mood on asset prices in an experimental setting. For example, does investment behavior in experimental settings differ during different phases of a lunar cycle?