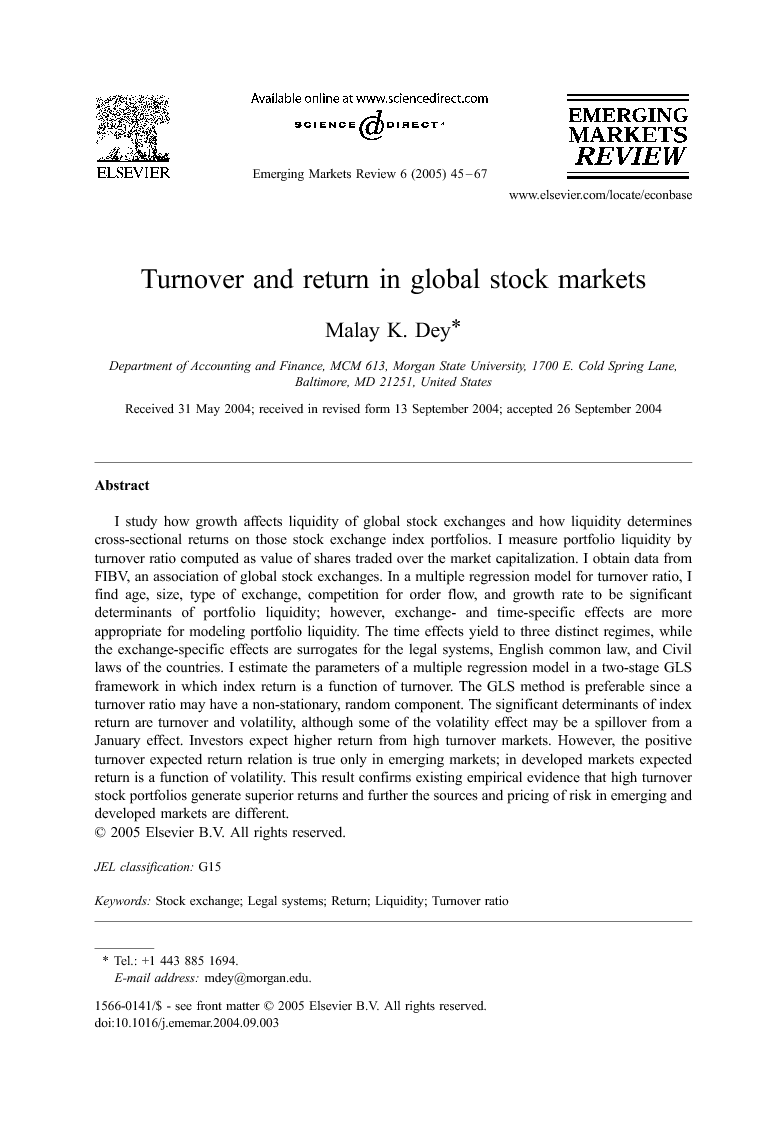 I study how growth affects liquidity of global stock exchanges and how liquidity determines cross-sectional returns on those stock exchange index portfolios. I measure portfolio liquidity by turnover ratio computed as value of shares traded over the market capitalization. I obtain data from FIBV, an association of global stock exchanges. In a multiple regression model for turnover ratio, I find age, size, type of exchange, competition for order flow, and growth rate to be significant determinants of portfolio liquidity; however, exchange- and time-specific effects are more appropriate for modeling portfolio liquidity. The time effects yield to three distinct regimes, while the exchange-specific effects are surrogates for the legal systems, English common law, and Civil laws of the countries. I estimate the parameters of a multiple regression model in a two-stage GLS framework in which index return is a function of turnover. The GLS method is preferable since a turnover ratio may have a non-stationary, random component. The significant determinants of index return are turnover and volatility, although some of the volatility effect may be a spillover from a January effect. Investors expect higher return from high turnover markets. However, the positive turnover expected return relation is true only in emerging markets; in developed markets expected return is a function of volatility. This result confirms existing empirical evidence that high turnover stock portfolios generate superior returns and further the sources and pricing of risk in emerging and developed markets are different.

Turnover ratio (also called turnover), value of shares traded during a period, as a percentage of market value of shares outstanding is a measure of liquidity. Recently, Datar et al. (1998) (later DNR) and Easley et al. (2002) (later EHO) use turnover ratio to test the empirical implication of Amihud and Mendelson (1986) (later A and M) and report convincing evidence that for individual securities, expected return and turnover are inversely related and that investors demand a premium for holding illiquid stocks. Kane (1994) extends the results of A&M (1986) to non-quoted liquid assets like non-traded index portfolios. Empirical evidence, however, indicates that the relation between expected return and turnover ratios for stock portfolios is positive. For domestic mutual fund portfolios, Brennan and Titman (1994) document a strong positive relation between turnover and excess return, and Wermers (2000) conclude that high turnover mutual fund portfolios generate excess return over a passive, Vanguard Index Fund. Rouwenhorst (1999) and Sang-Gyung et al. (2003) report an increasing relation between portfolio turnover and expected return in emerging markets, while Bekaert et al. (2003) (later BHL) find that for emerging markets turnover is not a determinant of future returns, although a cost of liquidity measure based on Lesmond et al. (1999) is. The positive relation between portfolio turnover and return documented by Brennan and Titman (1994), Rouwenhorst (1999), Sang-Gyung et al. (2003), and Wermers (2000) suggests that an active management of an index and its composition may lead to a high turnover and growth in its value. Domnowitz et al. (2001) argue that consideration of transactions costs and turnover may lead to a change in the composition of efficient global portfolios. In this paper, I investigate the determinants of turnover, and further, the relation between expected returns on stock exchange indexes and their corresponding turnover for 48 global stock exchange portfolios. The central argument in the paper is that a positive relation between turnover and growth as shown in Appendix A, drives the observed positive relation between expected return and portfolio turnover (Brennan and Titman, 1994, Rouwenhorst, 1999 and Sang-Gyung et al., 2003). Appendix A shows that portfolio turnover computed as value of shares traded over market capitalization for a portfolio is an equally weighted average of value of shares traded for individual securities in the portfolio, the weight being one over the market value of the portfolio. Thus portfolio turnover denotes composition (reciprocal of market capitalization), the fraction of risky, growth stocks in a portfolio, and its liquidity (value of shares traded). Miller and Scholes (1982) point out that reciprocal of market value measures beta risk. This positive relation between turnover and growth suggests that by choosing a high fraction of growth stocks in a portfolio i.e., actively managed, portfolio turnover may be increased, and since high growth stocks are riskier than value stocks, expected return on such portfolios will be higher reflecting their higher risk.1 However, this risk return relation differs between developed and emerging markets due to differences in risk perceptions and measurements for asset pricing. I obtain data on stock exchange portfolios from FIBV, Federation of International Stock Exchanges and investigate the relation between portfolio return and turnover ratio in two parts. First, I propose and test a multiple regression model for determining turnover from exchange-specific, microstructure factors, e.g., floor or electronic market, and single or multiple markets denoting competition for order flow, along with size, age of the exchange, and growth. Results from several regression models suggest that the important determinants of turnover are size, age of the exchange, and growth. However, based on F-statistics, a regime switching, exchange-specific fixed effect model with growth provides the best linear fit for turnover. Furthermore, the exchange-specific, microstructure effects are explained by differences in the origin of legal systems, English common law vs. Civil laws but not by differences between emerging and developed markets. Exchanges in English common law countries provide more uniform shareholder protection across all market types, and enjoy higher liquidity compared to their counterparts in Civil law countries. Second, I hypothesize that turnover is a determinant of return on equity markets after controlling for size and volatility, and estimate the parameters of a multiple linear regression model from a two-stage GLS method. Estimated GLS regression equations consistently demonstrate a direct positive relation between turnover and portfolio return over several models. Further analysis of a sample excluding the month of January indicates that the GLS estimates of coefficients for turnover are reduced to almost half of that in the full sample, and for volatility the coefficients become significantly negative thus indicating an inverse relation between volatility and return. I also find evidence that the significantly increasing relation between turnover and return is true exclusively for the emerging markets, and that developed markets show a significant relation between return and volatility but not between turnover and return. This study contributes to three strands of literature on return and liquidity of global stock markets. First, it complements recent studies by Clayton et al. (2000), Minier (2000), Jain (2002), and Boutchkova and Megginson (2000) in which the authors have sought to relate economic fundamentals including share issue privatization (SIP), institutional design to the formation, and liquidity of stock markets. Second, it ties the microstructure of financial markets to the origin of legal systems as proxies for political risk that determines financial market performance and thus complements the fledgling literature pioneered by La Porta et al., 1997, La Porta et al., 1998 and La Porta et al., 2002 (LLSV later) and expanded recently by Eleswarapu and Venkataraman (2002) (later EV) among others; and third, it provides new evidence in support of Brennan and Titman (1994), Rouwenhorst (1999), Sang-Gyung et al. (2003), and Wermers (2000) regarding the relation between return and turnover of stock portfolios but also highlights the difference between sources and pricing of risk in emerging and developed markets confirming the evidence in Harvey, 1995 and Harvey, 2000, and BHL (2003). The results on risk return relations in emerging markets complement findings on market integration, notably Bekaert and Harvey (1995).

I provide empirical evidence on the positive effect of growth on portfolio turnover, and further of turnover and volatility on expected return. I use portfolio data from 48 international stock exchanges to estimate the parameters of two regression models, a model for turnover, and a model for expected return. Results from a multiple regression model for turnover suggest that size, age, order execution system of the exchanges, competition for order flow denoted by single- vs. multi-market system, and growth are determinants of portfolio turnover. The microstructure effect on turnover denoted by order execution system and competition for order flow and their interactions are tied to the legal system of the country. English common law countries provide uniform shareholder protection and enjoy higher turnover than civil laws countries. I use a two-stage GLS approach to determine the effect of turnover on index returns. The GLS approach is necessary to circumvent spurious regression coefficients since turnover ratio of stock exchanges may include a non-stationary component. The GLS parameters of the estimated equations indicate that there is a direct relation between index return and turnover ratio. A direct relation between expected return and volatility measured as standard deviation of return is evident only in a sample without the month of January. Although the results generally support a positive return–turnover relation, further tests indicate that this relation is exclusively for emerging markets. For developed markets, I find support for a return–volatility relation.