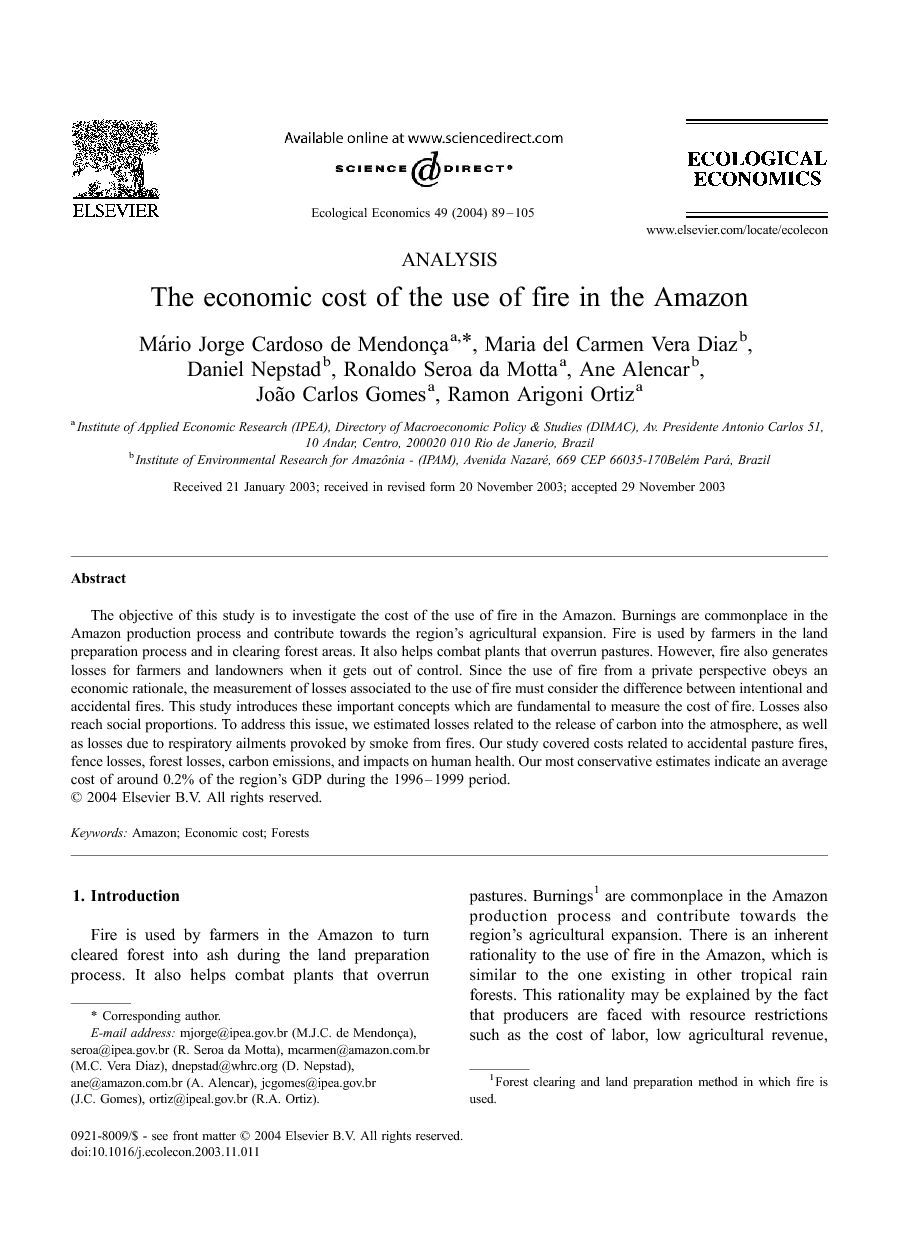 The objective of this study is to investigate the cost of the use of fire in the Amazon. Burnings are commonplace in the Amazon production process and contribute towards the region's agricultural expansion. Fire is used by farmers in the land preparation process and in clearing forest areas. It also helps combat plants that overrun pastures. However, fire also generates losses for farmers and landowners when it gets out of control. Since the use of fire from a private perspective obeys an economic rationale, the measurement of losses associated to the use of fire must consider the difference between intentional and accidental fires. This study introduces these important concepts which are fundamental to measure the cost of fire. Losses also reach social proportions. To address this issue, we estimated losses related to the release of carbon into the atmosphere, as well as losses due to respiratory ailments provoked by smoke from fires. Our study covered costs related to accidental pasture fires, fence losses, forest losses, carbon emissions, and impacts on human health. Our most conservative estimates indicate an average cost of around 0.2% of the region's GDP during the 1996–1999 period.

Fire is used by farmers in the Amazon to turn cleared forest into ash during the land preparation process. It also helps combat plants that overrun pastures. Burnings1 are commonplace in the Amazon production process and contribute towards the region's agricultural expansion. There is an inherent rationality to the use of fire in the Amazon, which is similar to the one existing in other tropical rain forests. This rationality may be explained by the fact that producers are faced with resource restrictions such as the cost of labor, low agricultural revenue, the lack of economically viable alternatives, as well as bad quality of the soil, which would justify the intense use of fire in agriculture and cattle raising endeavors Nepstad et al., 1999a, Nepstad et al., 1999b and Nepstad et al., 2001. However, fire also generates losses for farmers and landowners when it gets out of control. The risk of uncontrolled fires discourages landowners from investing in their properties, perpetuating the supremacy of cattle raising and slash-and-burn agriculture, in detriment to the establishment of agro-forest systems and sustainable forest management Nepstad et al., 1999a and Nepstad et al., 2001. Although the study of the use of fire may be extremely relevant, different than deforestation, research on the evaluation of costs related to the use of fire is not common. This is due to several factors. Fire generates a great variety of costs that not only have private effects, but also that affect society. A study of the use of fire in Indonesia Varma, 2003 and WRI, 2000 for the 1997–1998 period shows that the net loss of welfare reaches 7.6% of GDP. Some of the factors considered in this study are lumber, plantation and pasture losses, CO2 emissions, health damage, the effects upon genetic resources, etc. Since the use of fire obeys an economic rationale, the measurement of losses associated with the use of fire must consider the difference between intentional and accidental fire. As shall be seen later, our study introduces the important difference between intentional and accidental fire, which is fundamental to measure the cost of agricultural and forest resource losses. In this study, we shall develop an initial rigorous estimate of the economic costs of fire in the Amazon. In rural properties, the main losses brought about by the use of fire occur when burnings get out of control and accidentally spread into pasture and forest areas. In this case, if the affected areas are pastures, then losses may be valued as the cost of leasing other pastures for a 3-month period, which is the time necessary for the grasses to recover. Furthermore, fence destruction must also be accounted for. Fences are important in the Amazon because this region is still largely unexplored, so the demarcation of land with fences almost becomes a property right. If the surrounding areas include forests, then the economic cost may be valued as burned commercial value lumber. Losses may reach social proportions. In this case, we estimated losses related to the release of carbon into the atmosphere, which affects the economy negatively by contributing towards global warming, and affects the population due to respiratory ailments provoked by smoke from fires. The cost items that were estimated are those for which reliable data is available, and were divided into the following categories: costs for agricultural production (1996–1999); forest loss costs (1995–1998); costs associated to CO2 emissions (1995–1998); and costs associated to human health damage (1996–1999). According to economic valuation practice, our exercise comprised two steps: the estimation of physical damage for each cost category analyzed, and the determining of the monetary value of the estimated physical damage. This study is structured as follows. As in 1 and 2 considers the cost of the use of fire associated with cattle-raising, namely pasture and fence losses due to accidental fires. This section also considers the forest damage. With regard to forest damage, the costs were valued by the loss of commercial value lumber due to accidental forest burnings. Section 3 deals with the valuation of damage caused to society by CO2 emissions. These costs are estimated by the measurement of current emissions produced by the burning of vegetation biomass. In Section 4, the human health costs were obtained from the number of morbidity cases due to respiratory diseases provoked by smoke produced by fire. Lastly, in Section 5, the main conclusions of this study are presented.

The economic and environmental impacts related to fire have become increasingly important on the international scene, especially after the occurrence of the El Niño (1997/1998) phenomenon, when approximately 25 million ha of the planet's various ecosystems were affected by fire (FAO, 2001). In the Brazilian Amazon, the ecological disaster provoked by the Roraima fire called national and international attention to the negative effects of an agricultural tool which, when out of control, may do more harm than good, being a potential threat to ecosystems and biodiversity. Fire, traditionally considered an economically viable alternative by the region's farmers and cattle-raisers, has also become one of the main agents of transformation of the Amazon landscape and a generator of economic losses. Although these losses have been felt by region's economic sectors, there is still little effort being put into objectively determining their magnitude. Even on an international level, efforts are still incipient in determining the cost of the use of fire. Therefore, in both a Brazilian and an international context, this study is an attempt to give the problem a more concrete dimension. Due to limited data, our valuation exercise was restricted to the observed production and consumption losses. In addition, conservative measurements were always used, without considering the genetic and biologic aspects of the burned forest. In spite of the fact that these ecological aspects limit total valuation, the partial estimates may be interpreted from a more objective standpoint, since they measure the losses that directly affect the regional economy. Nevertheless, the physical and economic damages proved to be significant. The greatest physical and monetary losses resulting from the use of fire in agricultural activities in the Amazon occurred in 1998, as a result of the severe drought provoked by El Niño. Nearly 19,000 km2 of pasture area, 22,000 km of fences, and approximately 26,000 km2 of forests were accidentally burned. Apart from the damages sustained by the rural landowners, fire was also responsible for 13,000 hospital treatments associated with respiratory ailments. Furthermore, the forest fires released between 36 and 476 million tons of carbon into the atmosphere. The valued damages, as shown in Table 9, are also significant, and indicate annual costs, in 1998, of approximately US$ 90–5055 million, representing 0.2–9.0% of the region's total GDP. It must be noted that this great variation in results was strongly influenced by the CO2 emissions measurements, since the estimates of the stock of carbon in the forest are still very uncertain. The annual values were also affected by the occurrence of El Niño. In El Niño years, the annual monetary losses may have been greater than US$ 9 billion, mainly due to the CO2 emissions from forest fires. Since there are other types of costs not addressed in this study, we could make this sort of valuation into a lower bound. In Section 1 we claimed that exogenous fire discourages investment. This suggests that the costs of fire should include the potential gains after investment.In summary, this initial attempt to measure the costs associated with fire in the Amazon allows for the generation of economic indicators that question the efficiency of this practice. However, in order to obtain a more conclusive assessment of the efficiency of the use of fire, we would need to compare the total costs with the economic costs of adopting alternative techniques, or with the production losses resulting from not using fire. These issues, within a cost–benefit context, would certainly define a future research agenda. Regardless of the estimated magnitude of these economic costs, even at their lower limits, we may acknowledge the viability of fire prevention and fire fighting measures in the region.