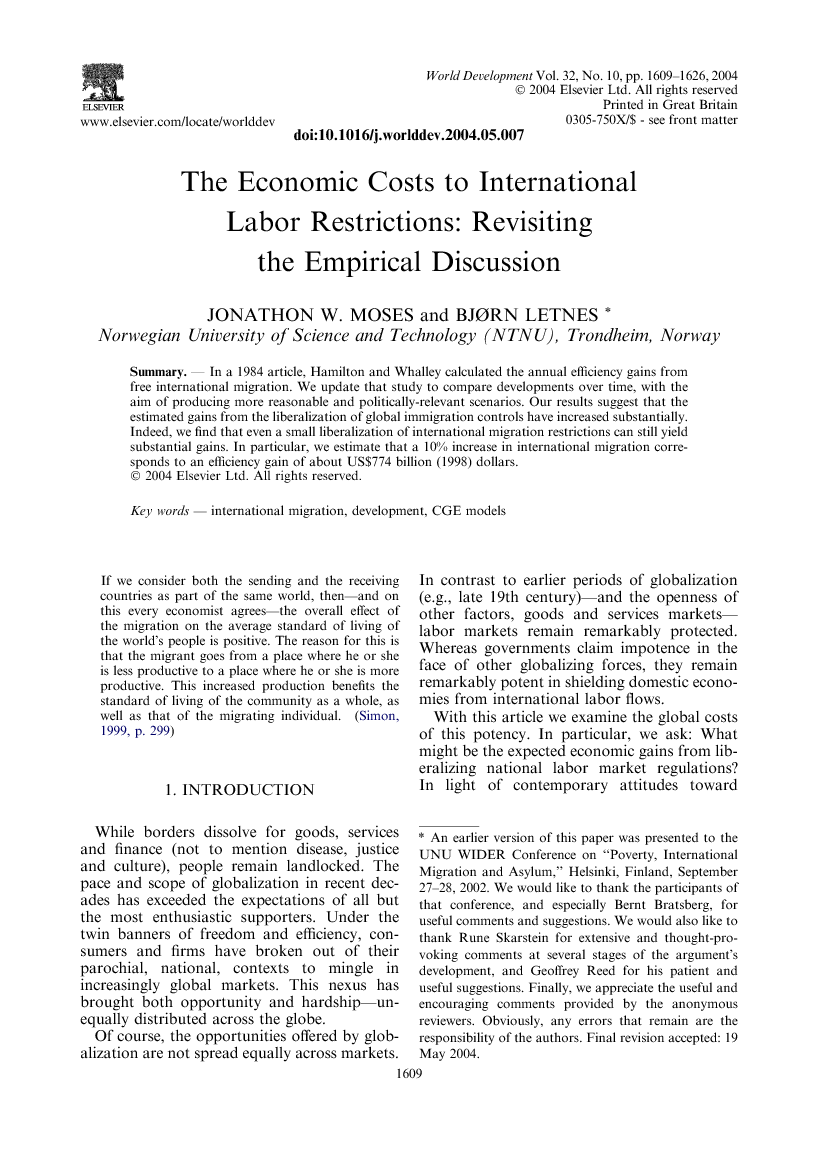 In a 1984 article, Hamilton and Whalley calculated the annual efficiency gains from free international migration. We update that study to compare developments over time, with the aim of producing more reasonable and politically-relevant scenarios. Our results suggest that the estimated gains from the liberalization of global immigration controls have increased substantially. Indeed, we find that even a small liberalization of international migration restrictions can still yield substantial gains. In particular, we estimate that a 10% increase in international migration corresponds to an efficiency gain of about US$774 billion (1998) dollars.

While borders dissolve for goods, services and finance (not to mention disease, justice and culture), people remain landlocked. The pace and scope of globalization in recent decades has exceeded the expectations of all but the most enthusiastic supporters. Under the twin banners of freedom and efficiency, consumers and firms have broken out of their parochial, national, contexts to mingle in increasingly global markets. This nexus has brought both opportunity and hardship—unequally distributed across the globe. Of course, the opportunities offered by globalization are not spread equally across markets. In contrast to earlier periods of globalization (e.g., late 19th century)—and the openness of other factors, goods and services markets—labor markets remain remarkably protected. Whereas governments claim impotence in the face of other globalizing forces, they remain remarkably potent in shielding domestic economies from international labor flows. With this article we examine the global costs of this potency. In particular, we ask: What might be the expected economic gains from liberalizing national labor market regulations? In light of contemporary attitudes toward international immigration, it may be more reasonable to ask: What costs are associated with a complete closure of national labor markets? Answering these sorts of questions is not common fare in contemporary development studies. There have been remarkably few economic studies of the international effects of migration. Indeed, for much of international economics, labor mobility is seen as an integral part of international trade theory. Standard trade models, resting on the work of Hecksher, Ohlin and Samuelson, begin by assuming that labor is immobile across countries, and hold that labor-abundant countries will export those goods that are relatively intensive in the production of labor. In a sense, these countries are seen to export labor: the trading of goods substitutes for the trading of people. A notable and early exception to this lack of interest in the systemic effects of free labor mobility is Hamilton and Whalley’s (H&W’s) remarkable study from 1984, using 1977 data. Since that time, however, surprisingly little has been written on the subject.1 For this reason, we start where H&W left off and construct an applied equilibrium model to generate a number of estimates (contingent on varying parameters) of the potential gains from liberalizing international labor markets. Our research suggests that the estimated efficiency gains from liberalizing immigration controls have only increased over time. While these gains were substantial in 1977, they have—in most cases—only grown over the subsequent two decades. Using 1998 data, we find that the estimated gains from free migration may be as high as US$55.04 trillion—exceeding the world’s GDP in that year. Even when several adjustments are made to make the analysis more realistic, the potential gains remain enormous. Indeed, our smallest estimate yielded a gain of 1.97 trillion dollars a year (or 5.6% of the world’s GDP in 1998). More significantly, a substantial proportion of these gains can be reaped without allowing for full migration. Even small initial changes in international migration controls could produce significant economic gains, and these gains dwarf those generated by traditional development policies. Like Hamilton and Whalley, we do not intend to minimize the potential obstacles to globalizing labor markets: they are enormous, and probably insurmountable. Nor do we wish to exaggerate the reliability of our empirical claims. Given the simplicity of the model, and the paucity of the data, we hasten to emphasize that the results, like the questions that motivate them, are highly speculative. Rather, our intent is modest: to provide an explicit and straightforward estimate of the costs of continued immigration controls. Only when these costs are known and made explicit can the global community make informed decisions about the utility (both economic and otherwise) of maintaining stringent migration controls. Our argument is presented in three parts. The first part provides our motivation for the study. Given the very speculative nature of the project itself, we think it is useful to begin by emphasizing its political and economic relevance. The second part of the article provides the main thrust of our argument. This part is divided into three subsections, providing: (a) our replication of the original model; (b) an update of the analysis using 1998 data and a comparison over time; and (c) an examination of the effects from a partial liberalization of migration flows. The article concludes by noting the limitations of this approach and by sketching out some paths for future research.

Since its 1984 publication, the questions raised by Hamilton and Whalley’s article have become only more pertinent. One by one, governments have jettisoned international restrictions on goods and capital mobility in order to reap the anticipated efficiency gains. A sprawling literature has documented the economic impact of increased globalization of goods and other factors. Yet there has been remarkably little work done on estimating the efficiency gains from liberalizing the last refuge of domestic market regulation. While it is unlikely that states will be willing to completely liberalize their domestic labor markets, it is still important to understand the costs associated with closed border policies. Our intent with this paper has been relatively simple: to update the Hamilton and Whalley analysis. Our motivations for doing so are two-fold. First, the world has changed significantly since 1977, and we are interested in finding out if these changes have affected the efficiency gains associated with free labor mobility. It appears that they have, and that this is an artifact of the growing global inequality that is often associated with globalization. Second, the policy relevance of this piece has become more important in a world characterized by increased globalization on other fronts. By revisiting this important issue in the context of a larger globalization debate, we hope to provide a measure of gain that can be compared to the efficiency gains generated by international mobility on other fronts (e.g., capital market liberalization). As we expect our findings to provoke discussion, we wish to conclude with a number of caveats. This study is the first step in a longer journey where we hope to provide more dependable indicators of the sort of gains that the world economy can expect to reap by relaxing immigration controls. We are fully aware of the shortcomings of our current approach, but we believe that it is important to begin where the existing literature left off. In the future, we hope to develop a more realistic applied general equilibrium model, and to buttress the counterfactual analysis with statistical studies of efficiency gains associated with existing migration flows. As a first step down this path, we have largely replicated Hamilton and Whalley’s original approach. This analysis was littered with empirical, conceptual and methodological shortcomings, most of which the authors themselves were fully aware. To our mind, future analyses need to consider revisions of some of the more problematic components (some of which are noted by the authors themselves), including: — Full employment. The assumption of full employment is necessary in order to assume that wage rates are determined by the marginal productivities of labor. But in less developed countries there is generally large, open and disguised unemployment. A perfectly elastic (Malthusian) labor supply function for the LDCs may be more realistic. Under these conditions, however, the loosening of developed country immigration restrictions would lower wage rates in all countries, as the worldwide labor supply would expand! — Constant wage/rental ratio within and across regions. Because of a lack of data for the return on capital (presumably), H&W assume that the ratio of wages to profits (w/r) is equal to unity in both rich and poor states before free migration. This implies that a high real wage rate is associated with a high profit rate, and vice versa. But the CES production function employed implies an inverse relationship: (i.e., a relatively high real wage rate in the developed world should be associated with a relatively lower profit rate). In the future we hope to allow for different ratios across regions. — It is highly unrealistic to assume that capital will be fixed by region when labor restrictions have been abolished. Future models need to incorporate both capital and labor mobility. The work by Hatton and Williamson (1998), on 19th century cross-Atlantic labor flows, confirms this. — It may be that a larger portion of the difference in wages across regions reflects productivity differences. If so, removing immigration controls in developed countries would have no impact on labor mobility. As H&W note, however, this too is an extreme position ( H&W, 1984, p. 63). Some common ground must be found between these extremes. — To the extent that the model abstracts from commodity trade and capital flows, the efficiency gains that it produces may be exaggerated. — The model should be expanded to consider the effects of migration by legal status (illegal/legal) and skill level; to consider inter-temporal tradeoffs; etc. Even though we recognize the inherent (and contentious) limits to the approach, we are moved by the magnitude of the annual efficiency gains estimated by it. Even the smallest (most cautious) estimations exceed the combined current levels of development assistance and foreign direct investment to the developing world. The unadjusted estimates even approach the worldwide GDP figures. Notwithstanding concerns for the brain drain, these speculative findings suggest that the developing world needs to consider more carefully the potential economic gains that might be harvested from advocating free migration as an important means to economic development. Of course, all of these gains do not accrue to the poorest countries; but the very size of the gains suggests that international migration may be one of the most effective means of shrinking the income gap that separates rich and poor countries. For this reason alone, more research needs to be done on examining the potential gains from freer migration—even in the current political context, where the tendency is rather to increase barriers to international migration. If our rough analysis is to be trusted, this tendency could significantly worsen the income divide between rich and poor worlds.