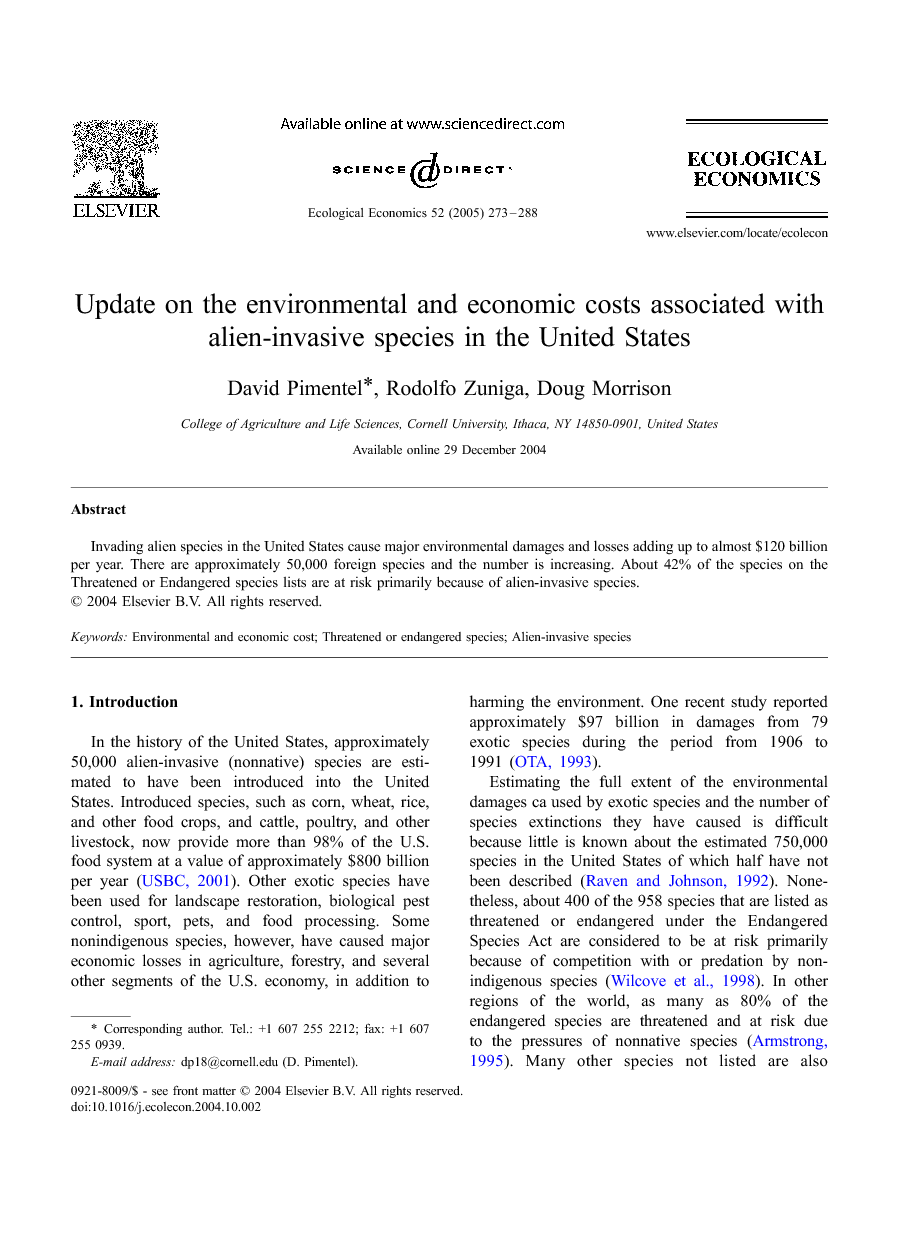 Invading alien species in the United States cause major environmental damages and losses adding up to almost $120 billion per year. There are approximately 50,000 foreign species and the number is increasing. About 42% of the species on the Threatened or Endangered species lists are at risk primarily because of alien-invasive species.

In the history of the United States, approximately 50,000 alien-invasive (nonnative) species are estimated to have been introduced into the United States. Introduced species, such as corn, wheat, rice, and other food crops, and cattle, poultry, and other livestock, now provide more than 98% of the U.S. food system at a value of approximately $800 billion per year (USBC, 2001). Other exotic species have been used for landscape restoration, biological pest control, sport, pets, and food processing. Some nonindigenous species, however, have caused major economic losses in agriculture, forestry, and several other segments of the U.S. economy, in addition to harming the environment. One recent study reported approximately $97 billion in damages from 79 exotic species during the period from 1906 to 1991 (OTA, 1993). Estimating the full extent of the environmental damages ca used by exotic species and the number of species extinctions they have caused is difficult because little is known about the estimated 750,000 species in the United States of which half have not been described (Raven and Johnson, 1992). Nonetheless, about 400 of the 958 species that are listed as threatened or endangered under the Endangered Species Act are considered to be at risk primarily because of competition with or predation by nonindigenous species (Wilcove et al., 1998). In other regions of the world, as many as 80% of the endangered species are threatened and at risk due to the pressures of nonnative species (Armstrong, 1995). Many other species not listed are also negatively affected by alien species and/or ecosystem changes caused by alien species. Estimating the economic impacts associated with nonindigenous species in the United States is also difficult; nevertheless, enough data are available to quantify some of the impacts on agriculture, forestry, and public health. In this article, as much as possible, we assess the magnitude of the environmental impacts and economic costs associated with the diverse alien species that have become established within the United States. Although translocated species can also have significant impacts, this assessment is limited to alien species that did not originate within the United States or its territories.

With more than 50,000 alien invasive species in the United States, the fraction that is harmful does not have to be large to inflict significant damage to natural and managed ecosystems and cause public health problems. There is a suite of ecological factors that may cause alien invasive species to become abundant and persistent. These include: the lack of controlling natural enemies (e.g., purple loosestrife and imported fire ant); the development of new associations between alien parasite and host (e.g., AIDS virus in humans and gypsy moth in U.S. oaks); effective predators in new ecosystem (e.g., brown tree snake and feral cats); artificial and/or disturbed habitats that provide favorable invasive ecosystems for the aliens (e.g., weeds in crop and lawn habitats); and invasion by some highly adaptable and successful alien species (e.g., water hyacinth and zebra and quagga mussel). Our study reveals that economic damages associated with alien invasive species effects and their control amount to approximately $120 billion/year. The Office of Technology Assessment (OTA, 1993) reported costs of $1.1 billion/year ($97 billion averaged over 85 years) for 79 species. The reason for our higher estimate is that we included more than 10-times the number of species in our assessment and found higher costs reported in the literature than OTA (1993) for some of the same species. For example, for the zebra mussel, OTA reported damages and control costs of slightly more that $300,000 per year; we used an estimate of $1 billion/year (Army, 2002). Although we reported specific total economic damages and associated control costs, precise economic costs associated with some of the most ecologically damaging exotic species are not available. The brown tree snake, for example, has been responsible for the extinction of dozens of bird and lizard species on Guam. Yet for this snake, only minimal cost data are known. In other cases, such as the zebra mussel and feral pigs, only combined damage and control cost data are available. These are considered low when compared with the extensive environmental damages these species cause, and do not include indirect costs. If we had been able to assign monetary values to species extinctions and losses in biodiversity, ecosystem services, and aesthetics, the costs of destructive alien invasive species would undoubtedly be several times higher than $120 billion/year. Yet, even this understated economic loss indicates that alien invasive species are exacting a significant toll. We recognize that nearly all our crop and livestock species are alien and have proven essential to the viability our agriculture and economy. Although certain alien crops (e.g., corn and wheat) are vital to agriculture and the U.S. food system, this does not diminish the enormous negative impacts of other nonindigenous species (e.g., mussels and exotic weeds). The true challenge lies not in determining the precise costs of the impacts of exotic species, but in preventing further damage to natural and managed ecosystems. Formulation of sound prevention policies needs to take into account the means through which alien species gain access to and become established in the United States. Since the invasions vary widely, we should expect that a variety of strategies would be needed for prevention programs. For example, public education, sanitation, and effective prevention programs at airports, seaports, and other ports of entry will help reduce the chances for biological invaders becoming established in the United States. Fortunately, the problem is gaining the attention of policymakers. On February 2, 1999, President Clinton issued an Executive Order allocating $28 million and creating an Interagency Invasive Species Council to produce a plan within 18 months to mobilize the federal government to defend against alien species invasions. In addition, a Federal Interagency Weed Committee has been formed to help combat nonindigenous plant species invasions (FIWC, 1999). The objective of this interagency committee is education, formation of partnerships among concerned groups, and stimulation of research on the biological invader problem. Secretary Bruce Babbitt (1999) has also established an Invasive Weed Awareness Coalition to combat the invasion and spread of nonnative plants. While these policies and practices may help prevent accidental and intentional introduction of potentially harmful exotic species, we have a long way to go before the resources devoted to the problem are in proportion to the risks. We hope that this environmental and economic assessment will advance the argument that investments made now to prevent future introductions will be returned many times over in the preservation of natural ecosystems, diminished losses to agriculture and forestry, and lessened threats to public health. In our view, investments to prevent or reduce the introduction of potentially harmful exotic species should be focused on educating the public and inspectors at airports and seaports concerning the threat of alien-invasive plants, animals, and microbes to the U.S. environment and economy.