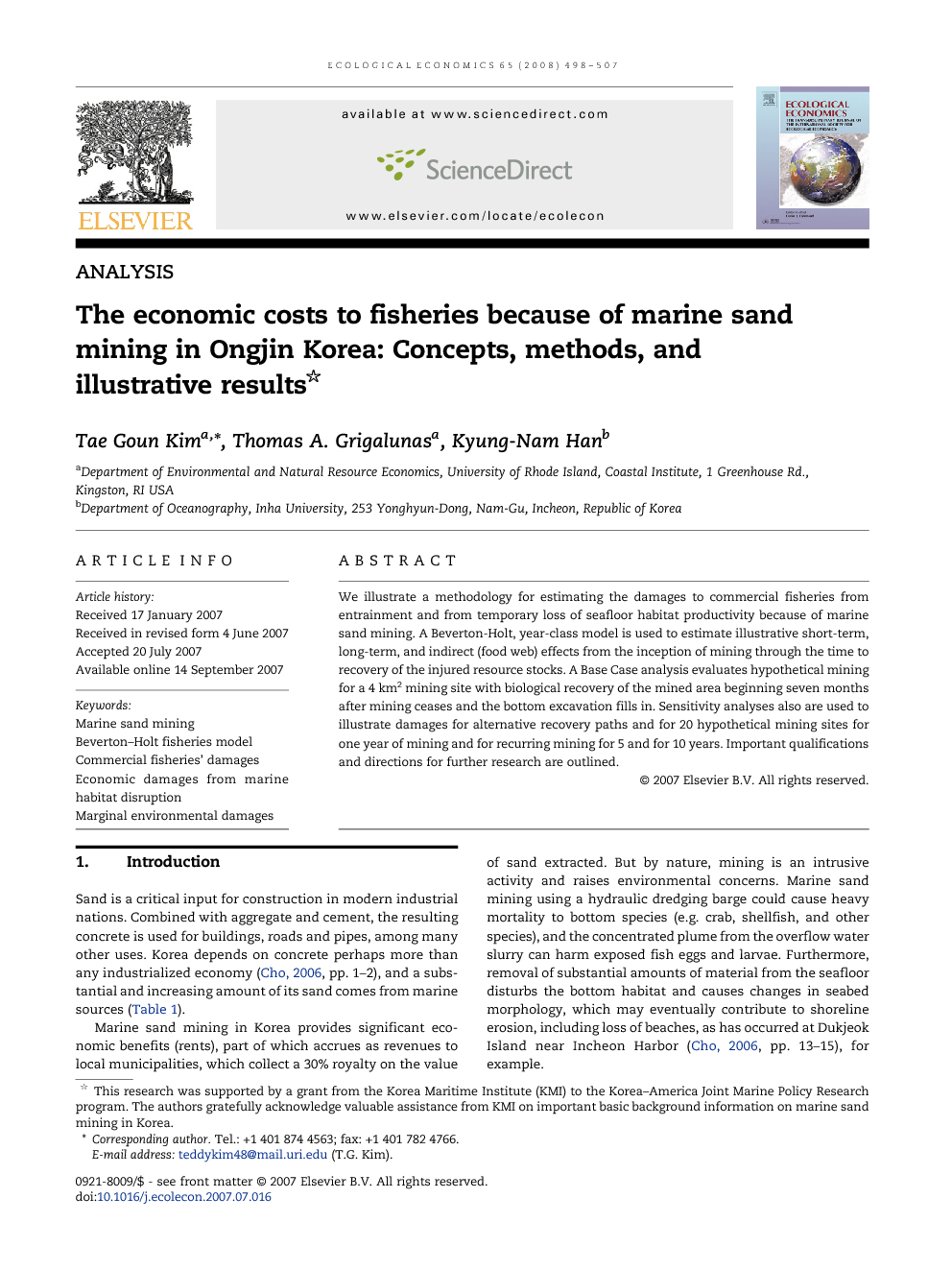 We illustrate a methodology for estimating the damages to commercial fisheries from entrainment and from temporary loss of seafloor habitat productivity because of marine sand mining. A Beverton-Holt, year-class model is used to estimate illustrative short-term, long-term, and indirect (food web) effects from the inception of mining through the time to recovery of the injured resource stocks. A Base Case analysis evaluates hypothetical mining for a 4 km2 mining site with biological recovery of the mined area beginning seven months after mining ceases and the bottom excavation fills in. Sensitivity analyses also are used to illustrate damages for alternative recovery paths and for 20 hypothetical mining sites for one year of mining and for recurring mining for 5 and for 10 years. Important qualifications and directions for further research are outlined.

Sand is a critical input for construction in modern industrial nations. Combined with aggregate and cement, the resulting concrete is used for buildings, roads and pipes, among many other uses. Korea depends on concrete perhaps more than any industrialized economy (Cho, 2006, pp. 1–2), and a substantial and increasing amount of its sand comes from marine sources (Table 1).Marine sand mining in Korea provides significant economic benefits (rents), part of which accrues as revenues to local municipalities, which collect a 30% royalty on the value of sand extracted. But by nature, mining is an intrusive activity and raises environmental concerns. Marine sand mining using a hydraulic dredging barge could cause heavy mortality to bottom species (e.g. crab, shellfish, and other species), and the concentrated plume from the overflow water slurry can harm exposed fish eggs and larvae. Furthermore, removal of substantial amounts of material from the seafloor disturbs the bottom habitat and causes changes in seabed morphology, which may eventually contribute to shoreline erosion, including loss of beaches, as has occurred at Dukjeok Island near Incheon Harbor (Cho, 2006, pp. 13–15), for example. Responding to concerns with the adverse environmental effects of marine mining, policies to address these concerns are being considered by the Ministry of Maritime Affairs and Fisheries (MOMAF), which is responsible for protecting Korea's marine resources. However, assessing the scope and scale of the external costs of marine mining raises complex issues, and an appropriate framework and data are needed to address these issues. This paper provides the underlying concepts and illustrates a methodology involving a bio-economic model for estimating selected external costs to commercial fisheries from marine sand mining in Korea. We estimate the potential external costs on commercial fisheries of hypothetical marine sand mining, using as a case study the Ongjin District in northwest Korea ( Fig. 1).The area covered in this paper was selected because useful biological information on area fisheries was available (Han and Park, 2002, pp. 207–312), which allows us to illustrate the application of a bioeconomic model to assess prospective damages. The area supports considerable commercial fishing which is vulnerable to mining, including a valuable crab fishery, as we describe later in this paper. We emphasize that our case study area in Ongjin is not currently being actively mined. However, it does have sand resources and is located near an area of Ongjin which is heavily mined and collectively accounts for approximately 60% of the marine mining of sand in Korea ( Korea Aggregates Association, 2002, p. 1). For our analysis, we adapt the bioeconomic model and methods used in earlier research by the authors (Grigalunas et al., 1988, Grigalunas et al., 1999, Grigalunas et al., 2001a, Grigalunas et al., 2001b and Opaluch et al., 2003), to illustrate the estimation of damages to commercially harvested species from marine sand mining.1 Damages are measured as the discounted in situ use value of the lost catch of commercially harvested fish. Our results herein are limited to losses attributed to two environmental stresses from mining. One is the direct lost catch from entrainment of vulnerable commercial species in the sand–water slurry. The second is the lost catch and indirect reductions in catch which result from loss of forage species and food web effects from the temporary loss of productive bottom habitat because of mining. Damages are measured for three distinct categories: short-term, long-term, and indirect effects, as defined below. Damages are assessed over time until the injured fish species recover to their pre-mining level. Collectively, the estimate of damages for the environmental stresses considered illustrate the shadow value (external cost) to commercial fishery resources harmed because of mining (Freeman, 2003). Our use of a bio-economic model requires considerable biological as well as economic information. As always, economic data, such as the landed (dockside) price of fish, is more readily available than biological information, for example, data on species abundance and on the life history parameters for potentially affected species. For abundance, we use the best available biological data, based on results from survey of Ongjin waters outside the currently mined areas (see nearby map) carried out from January 2001 to April 2002 (Han and Park, 2002, p. 207). Data were not available for some parameters, such as mortality. For this parameter, we use estimates for the same species or from very similar species in the United States. In light of the many sources of uncertainty faced, a conservative or overstated-cost approach is adopted. Overstated costs can be particularly useful when assessing difficult and controversial issues; particularly if a policy yields net benefits even when external costs are purposely overstated. When choices must be made, we opt for assumptions which tend to overstate the costs to fisheries because of mining. Nevertheless, considerable uncertainty surrounds several variables used in our analysis; sensitivity analyses are used to provide some insight into how the results would change if the alternative input values or key assumptions are adopted. Finally, special efforts are taken to make clear the model, data, and assumptions used in order to better enable the reader to assess the reasonableness of our approach and results. We emphasize that the results presented here are meant to be illustrative damages for the Korea sand mining case and may not reflect damages from mining in other areas. In the sections which follow we describe the environmental issues – external costs – of concern; present the concepts, methods, and data used to assess external costs, and provide illustrative results for a Base Case and also show results for several sensitivity analyses. A summary and conclusions section reviews the analysis and key results, provides important qualifications, and outlines possible future directions for research on the costs to fisheries of marine sand mining.

Marine mining of sand is of major and growing importance for construction in Korea but poses several environmental risks, including loss of commercial fisheries catch and shoreline erosion. Government policies to address these environmental concerns are under consideration, but the environmental costs of mining involve complex issues and have not been well understood. This paper provides illustrative estimates of the economic costs to commercial fisheries of marine sand mining, using the Ongjin Administrative District as a case study. No active mining occurs on the sites studied, although considerable mining has occurred nearby. A Beverton–Holt, year-class bio-economic model is used to assess the losses to commercial fisheries from entrainment of fish, temporary loss of bottom habitat productivity, and lost catch because of indirect (food web) effects when for age species and other food is removed from the system by the hydraulic dredge. Reflecting the data limitations and uncertainties, a conservative, overstated cost approach is generally adopted and several sensitivity analyses are used. Interest in prospective damages from marine sand mining stems, in part, from the role which such estimates might play in assessing the possible policy options available to address the externalities concerned. In principle, many policy options may be available to deal with the environmental costs resulting from marine sand mining, and the evaluation. Our estimate of aggregate damages represents the present value of all the identified quantified economic losses to commercial fisheries through the period of full fishery resource recovery to their without-mining level. Such information when suitably refined by including up to date data anticipated from further research might be useful for discrete policy decisions. These could include, for example, whether or not to allow mining at a certain area, or whether to permit mining during particular periods, based on a comparison of the estimated total benefits from mining with the resulting estimated total damages to fisheries. Proceeds from fees (“Pigovian taxes”) on externalities might be used to help restore injured resources. The cumulative damages and sensitivity analyses suggest that the successive mining at the same sites and longer recovery times for habit can cause the substantial increase in estimated economic damages of sand mining. Further research to refine the recovery period seems particularly important. In further research using additional data, improved estimates of economic damages might be used to weigh alternative allowable mining periods and dredging depths, which can be important because, in general, the both influence sites-specific time to recovery (Birklund and Wijsman, 2005, p. 2–2) and hence the scale of discounted damages. Incremental damages for the cases considered range from $3.79 per 1800 m3 mined for the base case to as high as $7.41 per 1800 m3 for delayed seafloor habitat recovery. Marginal damages include short-term, long-term and indirect (food web) effects and represent the shadow price of the external costs associated with mining considered in this paper. Given the estimated marginal costs as unit fees to internalize external costs, policy makers can examine the behavior of profit maximizing individual mining operators. This focus is very important because concerns about how proposed environmental controls would affect individual operators typically are a key issue in regulatory impact analyses. Future research could refine and extend the analysis presented in this paper. One improvement would be to use recent, but as yet unavailable, biological and physical data gathered for the study area. Better data would improve the results presented in this paper and might allow for estimates of spatial or temporal differentiation of damages. It also may be possible to extend the model to estimate damages from excess mortality to larvae because of the sediment plume from the mining barge. Damage estimates also could be improved with more refined information on the link between dredging depth and the time required for the benthic environment area to resume its services as productive habitat for cases where the excavation differs from 2 m. Further, the model could be applied to other areas of Korea where the species, their abundance and value, and mining conditions might differ from the Ongjin case study presented in this paper. Finally, the present analysis assumes that fishing effort is not affected by sand mining and, hence, the loss in the value of landings is the economic loss. This serves to overstate damages and is consistent with the deliberate, conservative (i.e., overstated) approach adopted in this study. The assumption of no change in effort is reasonable for a single site or a few sites, but may need to be relaxed when assessing damages over many sites, particularly when considering cumulative (i.e., multi-year effects). In such cases, effort, variable costs, and therefore damages all would be expected to change. More elaborate and conceptually stronger approaches involving switching behavior among areas by fishermen (e.g., Opaluch and Bockstael, 1984 and Sutinen and Ward, 1994) could be modeled with adequate data, but this would be a substantial effort. It also might be possible to include economic damages because of mining-induced coastal erosion.