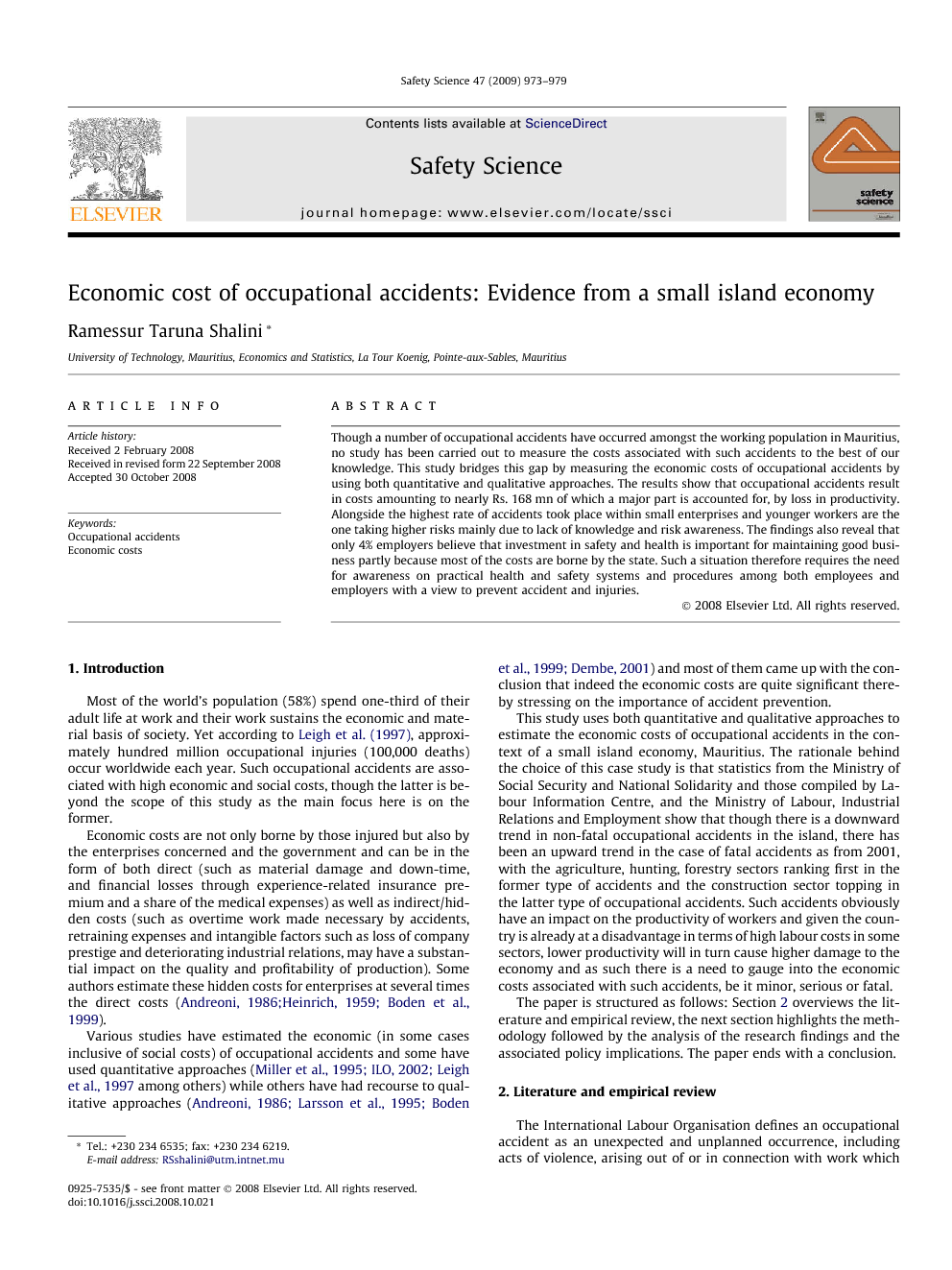 Though a number of occupational accidents have occurred amongst the working population in Mauritius, no study has been carried out to measure the costs associated with such accidents to the best of our knowledge. This study bridges this gap by measuring the economic costs of occupational accidents by using both quantitative and qualitative approaches. The results show that occupational accidents result in costs amounting to nearly Rs. 168 mn of which a major part is accounted for, by loss in productivity. Alongside the highest rate of accidents took place within small enterprises and younger workers are the one taking higher risks mainly due to lack of knowledge and risk awareness. The findings also reveal that only 4% employers believe that investment in safety and health is important for maintaining good business partly because most of the costs are borne by the state. Such a situation therefore requires the need for awareness on practical health and safety systems and procedures among both employees and employers with a view to prevent accident and injuries.

Most of the world’s population (58%) spend one-third of their adult life at work and their work sustains the economic and material basis of society. Yet according to Leigh et al. (1997), approximately hundred million occupational injuries (100,000 deaths) occur worldwide each year. Such occupational accidents are associated with high economic and social costs, though the latter is beyond the scope of this study as the main focus here is on the former. Economic costs are not only borne by those injured but also by the enterprises concerned and the government and can be in the form of both direct (such as material damage and down-time, and financial losses through experience-related insurance premium and a share of the medical expenses) as well as indirect/hidden costs (such as overtime work made necessary by accidents, retraining expenses and intangible factors such as loss of company prestige and deteriorating industrial relations, may have a substantial impact on the quality and profitability of production). Some authors estimate these hidden costs for enterprises at several times the direct costs (Andreoni, 1986, Heinrich, 1959 and Boden et al., 1999). Various studies have estimated the economic (in some cases inclusive of social costs) of occupational accidents and some have used quantitative approaches (Miller et al., 1995, ILO, 2002 and Leigh et al., 1997 among others) while others have had recourse to qualitative approaches (Andreoni, 1986, Larsson et al., 1995, Boden et al., 1999 and Dembe, 2001) and most of them came up with the conclusion that indeed the economic costs are quite significant thereby stressing on the importance of accident prevention. This study uses both quantitative and qualitative approaches to estimate the economic costs of occupational accidents in the context of a small island economy, Mauritius. The rationale behind the choice of this case study is that statistics from the Ministry of Social Security and National Solidarity and those compiled by Labour Information Centre, and the Ministry of Labour, Industrial Relations and Employment show that though there is a downward trend in non-fatal occupational accidents in the island, there has been an upward trend in the case of fatal accidents as from 2001, with the agriculture, hunting, forestry sectors ranking first in the former type of accidents and the construction sector topping in the latter type of occupational accidents. Such accidents obviously have an impact on the productivity of workers and given the country is already at a disadvantage in terms of high labour costs in some sectors, lower productivity will in turn cause higher damage to the economy and as such there is a need to gauge into the economic costs associated with such accidents, be it minor, serious or fatal. The paper is structured as follows: Section 2 overviews the literature and empirical review, the next section highlights the methodology followed by the analysis of the research findings and the associated policy implications. The paper ends with a conclusion.

From this study, it can be concluded that in Mauritius also occupational accidents result in substantial social and economic burden on the victims, employers, the state and other community members as have been concluded by other researchers within the literature and empirical review. Mauritius being a small island developing state characterised by limited land capacity, limited natural and human resources, excessive dependence on international trade and vulnerability to global developments and climatic conditions and also an ageing population, cannot afford to lose productive workers through fatal and serious accidents resulting in disability as well as huge sum of money to react to accident occurrences. It is believed that this study has unveiled only the tip of the iceberg, as many other cost elements e.g. the legal system, administrative cost and other cost have not been considered in the absence of data. Accordingly it is strongly recommended that the authorities such as the CSO carries out an in-depth study on this aspect of state expenditure as it is believed that the magnitude of these cost will give managers and policy makers necessary information in a language they understand – ‘the language of the bottom line’ as commented by National Occupational Health and Safety Commission and convey the message that sustainable economic development may not simply be compatible with occupational safety and health investment but requires it. As far as further research is concerned there is a need to investigate the reasons preventing employers to invest more in occupational health and safety and to develop a safety culture within their organisations. At the same time it must be noted that this study was carried out using for the period 2002–2003 and as such a similar study using more recent data would be most welcoming to be able to see if there has been any improvement in terms of safety culture and investment on the part of the employers.