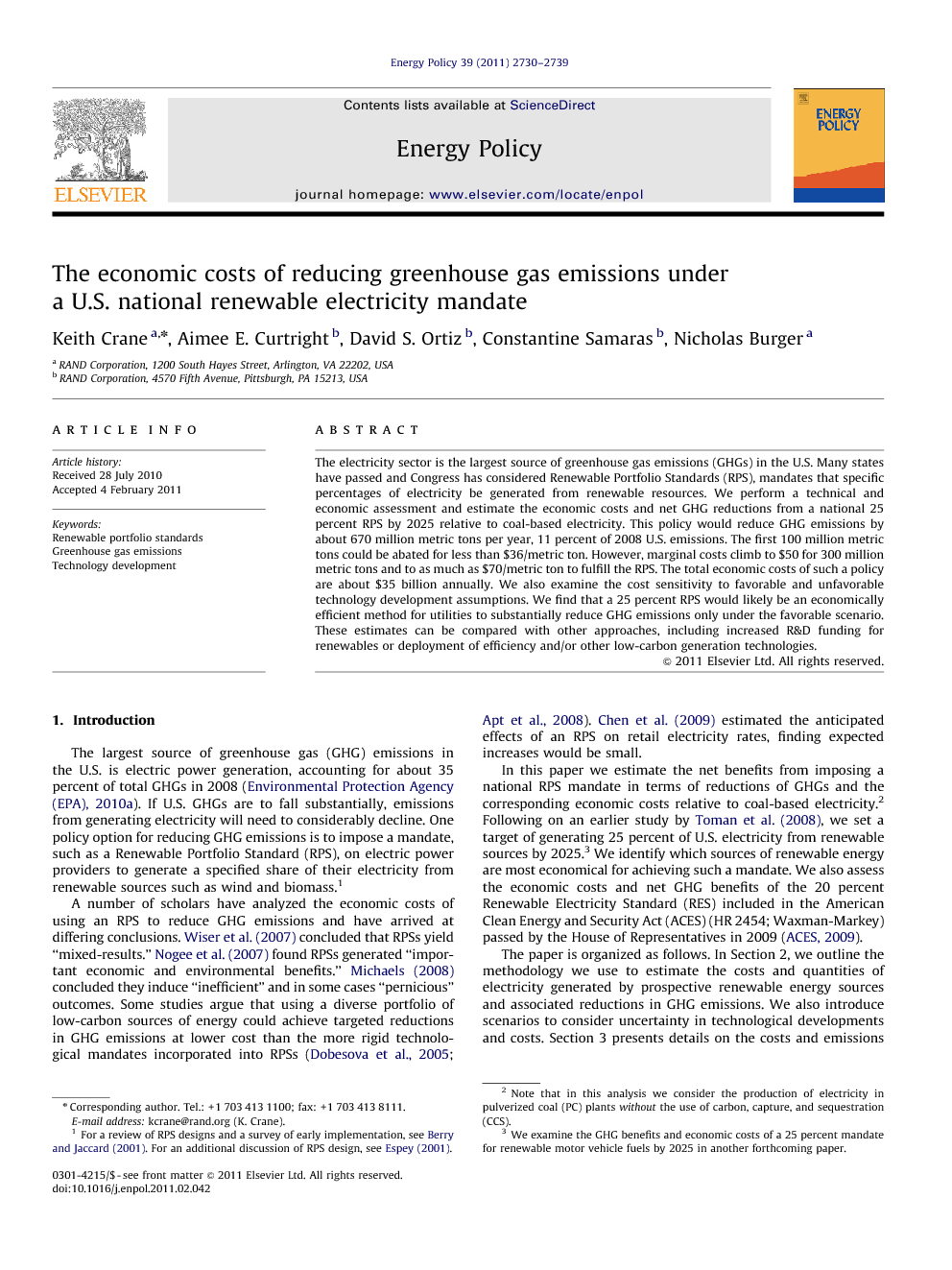 The electricity sector is the largest source of greenhouse gas emissions (GHGs) in the U.S. Many states have passed and Congress has considered Renewable Portfolio Standards (RPS), mandates that specific percentages of electricity be generated from renewable resources. We perform a technical and economic assessment and estimate the economic costs and net GHG reductions from a national 25 percent RPS by 2025 relative to coal-based electricity. This policy would reduce GHG emissions by about 670 million metric tons per year, 11 percent of 2008 U.S. emissions. The first 100 million metric tons could be abated for less than $36/metric ton. However, marginal costs climb to $50 for 300 million metric tons and to as much as $70/metric ton to fulfill the RPS. The total economic costs of such a policy are about $35 billion annually. We also examine the cost sensitivity to favorable and unfavorable technology development assumptions. We find that a 25 percent RPS would likely be an economically efficient method for utilities to substantially reduce GHG emissions only under the favorable scenario. These estimates can be compared with other approaches, including increased R&D funding for renewables or deployment of efficiency and/or other low-carbon generation technologies.

The largest source of greenhouse gas (GHG) emissions in the U.S. is electric power generation, accounting for about 35 percent of total GHGs in 2008 (Environmental Protection Agency (EPA), 2010a). If U.S. GHGs are to fall substantially, emissions from generating electricity will need to considerably decline. One policy option for reducing GHG emissions is to impose a mandate, such as a Renewable Portfolio Standard (RPS), on electric power providers to generate a specified share of their electricity from renewable sources such as wind and biomass.1 A number of scholars have analyzed the economic costs of using an RPS to reduce GHG emissions and have arrived at differing conclusions. Wiser et al. (2007) concluded that RPSs yield “mixed-results.” Nogee et al. (2007) found RPSs generated “important economic and environmental benefits.” Michaels (2008) concluded they induce “inefficient” and in some cases “pernicious” outcomes. Some studies argue that using a diverse portfolio of low-carbon sources of energy could achieve targeted reductions in GHG emissions at lower cost than the more rigid technological mandates incorporated into RPSs (Dobesova et al., 2005 and Apt et al., 2008). Chen et al. (2009) estimated the anticipated effects of an RPS on retail electricity rates, finding expected increases would be small. In this paper we estimate the net benefits from imposing a national RPS mandate in terms of reductions of GHGs and the corresponding economic costs relative to coal-based electricity.2 Following on an earlier study by Toman et al. (2008), we set a target of generating 25 percent of U.S. electricity from renewable sources by 2025.3 We identify which sources of renewable energy are most economical for achieving such a mandate. We also assess the economic costs and net GHG benefits of the 20 percent Renewable Electricity Standard (RES) included in the American Clean Energy and Security Act (ACES) (HR 2454; Waxman-Markey) passed by the House of Representatives in 2009 (ACES, 2009). The paper is organized as follows. In Section 2, we outline the methodology we use to estimate the costs and quantities of electricity generated by prospective renewable energy sources and associated reductions in GHG emissions. We also introduce scenarios to consider uncertainty in technological developments and costs. Section 3 presents details on the costs and emissions associated with each of the renewable technologies we analyze: hydropower, wind, biomass, solar thermal, and geothermal. We present our results in Section 4. In Section 5, we discuss the implications of our analysis for recent proposals for legislation to reduce GHGs.