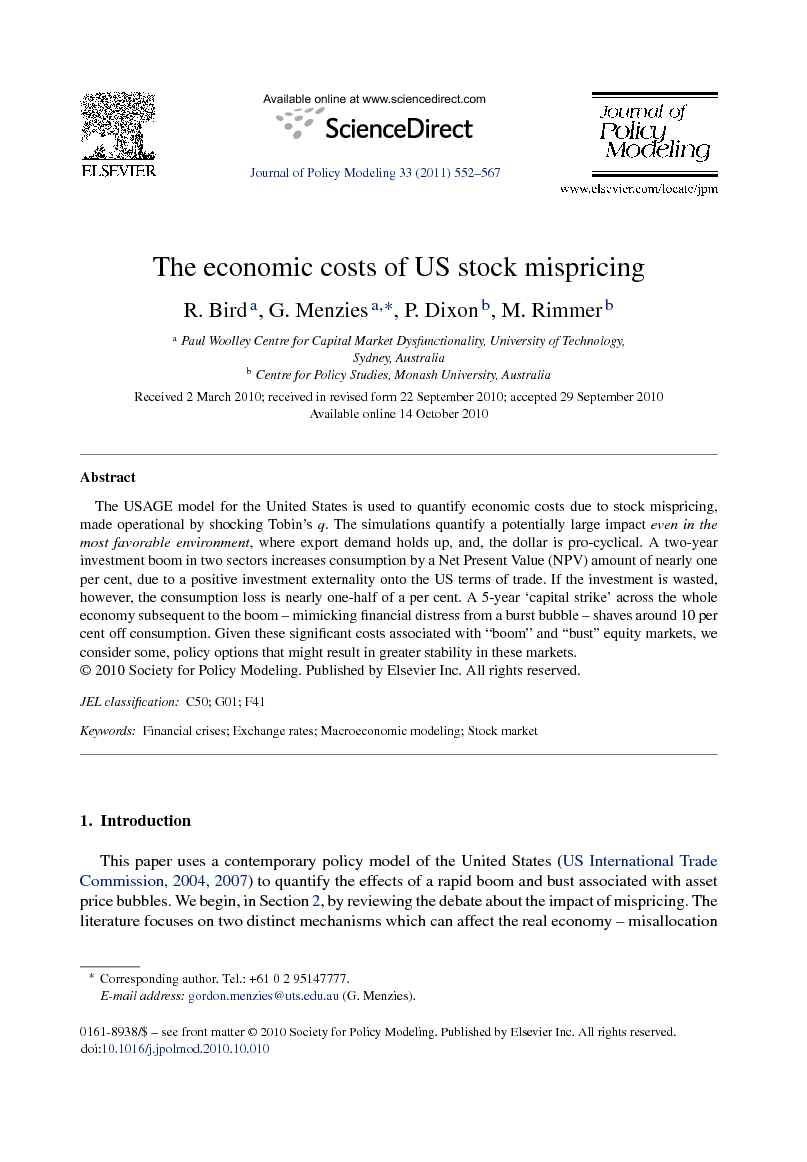 The USAGE model for the United States is used to quantify economic costs due to stock mispricing, made operational by shocking Tobin's q. The simulations quantify a potentially large impact even in the most favorable environment, where export demand holds up, and, the dollar is pro-cyclical. A two-year investment boom in two sectors increases consumption by a Net Present Value (NPV) amount of nearly one per cent, due to a positive investment externality onto the US terms of trade. If the investment is wasted, however, the consumption loss is nearly one-half of a per cent. A 5-year ‘capital strike’ across the whole economy subsequent to the boom – mimicking financial distress from a burst bubble – shaves around 10 per cent off consumption. Given these significant costs associated with “boom” and “bust” equity markets, we consider some, policy options that might result in greater stability in these markets.

This paper uses a contemporary policy model of the United States (United States International Trade Commission, 2004 and United States International Trade Commission, 2007) to quantify the effects of a rapid boom and bust associated with asset price bubbles. We begin, in Section 2, by reviewing the debate about the impact of mispricing. The literature focuses on two distinct mechanisms which can affect the real economy – misallocation and financial sector distress.1 This sets the stage for designing three stock mispricing scenarios which are applied to the US economy. Section 3 explains the model qualitatively, drawing on the canonical Mundell–Fleming and optimal capital stock diagrams. The findings with respect to the economics costs of stock mispricing are discussed in Section 4 and the policy implications of these findings are surveyed in Section 5. Section 6 provides a conclusion to the paper.

This paper has examined the impact of modest stock market mispricing in the US economy, focusing on the non-policy parameters of the US economy, in keeping with Lucas (1976). By ‘modest’ we mean that Tobin's q is only away from its baseline value by one standard deviation. Our analysis therefore eschews the spectacular swings in asset prices associated with recent bubbles, though it has been natural to stick to the word ‘bubble’. We have deliberately kept the magnitude of our shocks to q small (no more than one standard deviation) because mis-pricing of this magnitude is quite likely to persist for extensive periods. While this may not be as newsworthy as, say, recent oscillations in US house prices, it drives home the point that large mis-pricing is likely to be even more serious. As our review of the literature demonstrates, the impact of this mis-pricing depends to a great extent upon the presence or otherwise of distortions in the whole economic system. Indeed, aligning assets with their fundamental values will not necessarily improve welfare – measured here as the NPV of consumption – if there are other distortions in the economic environment (Lipsey & Lancaster, 1956). The approach of this paper is to face the implications of the theory of the second best head-on, by using a full scale model of the US to calculate the welfare costs of bubbles numerically. Modeling allows – indeed requires – that one stipulate any externalities. As it happens, the USAGE model has an investment externality, whereby the exchange rate appreciation leads to an improvement in the terms of trade. Such an externality is subject to the full set of worldwide demand and supply elasticities, and the condition of the cycle overseas, but it is not implausible. Naturally, this improved terms of trade assumes a benign international environment; a point we will return to presently. If the investment of the bubble is wasted, there is a loss borne by consumers, equivalent to just over one per cent of consumption. However, in a Keynesian fashion, the spending need not be productive to stimulate activity or (as we have just noted) improve the terms of trade. By experimenting with economy-wide pessimism following the bursting of the bubble, which mimics the (un-modeled) effect of financial distress, we have demonstrated that a mild capital strike (associated with only a one-half of a percentage point decline in q) can have large negative consumption costs if it is widespread and long-lived. What implications, if any, does our work have for an evaluation of the global financial crisis? It turns out that our model simulations represent conservative losses, even apart from the fact that our asset mis-pricing has been small relative to reality. First, the invidious position of the US economy is apparent from the importance of net exports in the Mundell–Fleming model, and is highlighted by our simulations. At the onset of the crisis – mid-2007 to early 2008 – the dollar depreciated, shielding GDP from the attenuated domestic expenditures.33 During this phase, the economy was behaving as USAGE would predict. However, over the subsequent year the dollar appreciated, perhaps reflecting a ‘Safe Haven’ status of the currency ( Fig. 7). The estimated consumption losses in USAGE are therefore likely to be much lower than what they will be with a ‘safe haven’ currency.Put another way, the pro-cyclical (or, more correctly, pro-IS) exchange rate of the Mundell–Fleming model, which has assured many an undergraduate of the inherent stability of the macro-economy, may fail us in a world of unruly currency markets. Another reason why losses were greater in the GFC is that export demand for US goods was significantly lower, due to the world recession. Thus sellers of US wares overseas face both an unfavorable price (via the dollar) and an unfavorable quantity shock. Taking these three factors together – the modest mis-pricing, the exogenous demand for world exports, and, the procyclical currency in USAGE – our simulations understate the impact of the GFC-style crisis on the US economy. However, the contribution of this paper has been to highlight the serious nature of more modest mis-pricing in equity markets. Finally, events over the last decade suggest that we may not be able to rely on markets to solve the problems identified in this paper due to excess volatility in equity markets. In the paper we considered a number of policies designed to reduce the likelihood of bubbles becoming established. Some of these involved accounting bodies reducing the flexibility available to companies when drawing up their financial statements, the introduction of different remuneration packages in companies, the introduction of tighter capital requirements for banks, and the closer monitoring of the activities of financial institutions by government. If all else fails, there is a good case for coordinated action by central banks to stifle bubbles in the early stage of their development.